Let's hear it for the NYO 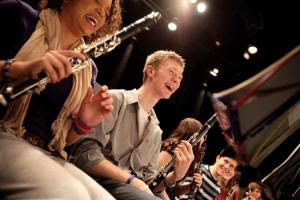 Lack of print space (I guess) has meant that essentially I've written not one but two pieces about the National Youth Orchestra of Great Britain, which takes over the day after the Simon Bolivar Youth Orchestra of Venezuela at the RFH, on Sunday. A tall order, perhaps, but they deserve celebration. They may not be Latin American, but they have their own function to fulfil, and do so with vast flair and passion. (PS: I am seriously p***ed off that I'm missing the entire Simon Bolivar Youth Orchestra visit. I've had such a vile flu that today is the first day I've been able to stand up since Monday, and of course our concert on Saturday finishes just 15 mins before theirs begins, on the other side of town. So you will have to look elsewhere for reports on how the week-long residency went.)

Here's the piece that came out in the Indy today. Written after our visit to the band in Durham last Friday.

And here is the piece I wrote before that, including interviews with a couple of the youngsters and the director.

Look out, London: the Venezuelans are coming! The Símon Bolívar Youth Orchestra of Venezuela and its conductor, Gustavo Dudamel, have set the musical world ablaze. Its parent organisation, El Sistema, has proved how music can effect societal transformation, plucking children out of the slums, teaching them to play instruments, providing them with new hope for the future. And on stage they’re dynamite. They’re hot, they’re Latin, and they’re on their way here for a week-long residency at the Royal Festival Hall.

The evening after their final London concert, however, you can hear another youth orchestra – very different, yet also overflowing with the palpable thrill of making music. This is the National Youth Orchestra of Great Britain, founded back in 1948 and still going more than strong.

But El Sistema has had a seismic effect on attitudes to what youth orchestras can achieve, and the NYO’s traditional, goal-centred modus operandi could be in the firing line. Are the Venezuelans galvanising Britain’s top youth orchestra into significant change?

When I was a music student, we all looked up with awe to anyone who had won a place in the mighty NYO. Highly competitive, it accepted the crème-de-la-crème of British talent. Many alumni have found their way to stardom: Sir Simon Rattle, Sir Mark Elder, the composers Judith Weir and Thomas Adès, the trumpeter Alison Balsom, the cellist Guy Johnston – the list could go on and on.

All of this remains true today, but change is in the air. For one thing, the forthcoming Royal Festival Hall performance is, incredibly enough, the first time the NYO has played at London’s premier concert hall for 18 years. This in itself might be a sign that perhaps it was time for the orchestra to take a fresh view on what it does, where and how.

The NYO consists of 160 young musicians aged 13 to 19, Grade VIII standard and upwards, each of whom usually stays for around three years. Budding composers, too, are accepted and encouraged. Top conductors grace its podium – recently Antonio Pappano, Vassily Petrenko and, this Easter, Paul Daniel – and in three intensive residential courses per year in the school holidays the youngsters work hard with these international figures at producing top-notch performances. For most of them, it’s a first taste of what life in a professional orchestra is like, and a chance for close encounters with such seminal works as Stravinsky’s The Rite of Spring, Messiaen’s Turangalîla or the gargantuan symphonies of Mahler.

That used to be its whole raison d’être. But, as the orchestra’s recently appointed director, Sarah Alexander, puts it: “I found an incredible vitality here, but it wasn’t really getting out into the world. Now I’m trying to join the NYO to the rest of the world by focusing on how this can be the most inspirational orchestra for young musicians. That raises all sorts of questions.” In other words, it’s no longer enough for the NYO to retreat to rural surroundings for rarified rehearsal: they have to get out there and start communicating their passion and dedication at grassroots level.

She has changed the orchestra’s imagery and presentation language, with ‘vernacular’ programme notes and plenty of opportunities for the members to make their voices heard, and introduced a raft of new associations and residencies. Two are with The Sage, Gateshead, and the Northern Sinfonia, whose principals come in to coach the students; another has begun in London at Southbank Centre. They aim to build up relationships with audiences and younger students, such as The Sage’s Young Sinfonia, for children around Grade VI-VII standard, who might find in the NYO the inspiration to keep their musical efforts going.

Now, instead of only tackling works that allow all 160 members to be on stage together, the orchestra often divides into smaller ensembles to explore contemporary pieces, improvisation and more. The residential courses have begun to feature not only rehearsals, but group work on rhythm, performances by visiting artists and even dance workshops to enhance understanding of pieces such as Ravel’s La Valse. Melanie Rothman, 17, the orchestra’s principal oboe, attended last year’s waltz workshop: “At first some people were quite scared,” she laughs, “but we all really got into it. On the way to the rehearsal afterwards we were dancing around in the road!” Now they’re about to attempt the tango, in preparation for a suite from Thomas Adès’s opera Powder Her Face.

Sarah Alexander is eager to emphasise that most of the players are not from privileged backgrounds: only 3.8 per cent currently attend non-specialist fee-paying schools with no bursary. Overall 32 per cent are at state schools, 30 per cent at specialist music schools and 38 per cent at fee-paying schools, the vast majority of those with music scholarships. It is not so much ‘elitist’ as meritocratic, selecting its members solely by their playing standard, with an average of four applications for every place available.

But the SBYOV youngsters mostly started out in dire poverty. That orchestra literally changes lives. How comparable can the NYO really become? “We have to be clear about our own capacity,” Alexander agrees. “We take 160 people from all over the country, but we haven’t the capacity to go into every primary school in the UK giving the kids instruments, unlike El Sistema in Venezuela. What we can do is advocate the need for that to happen; and we are looking at what our role should be in relation to that grassroots work.” Therefore young people can buy NYO concert tickets for just £5; projects bring local young players to meet the students at their courses; and Alexander wants to develop a sense that the orchestra is a “national team” by programming significant pieces of British contemporary music by composers such as George Benjamin and Thomas Adès.

Michael Foyle, 17, the NYO’s leader – a hugely talented violinist who nevertheless reached the final of the BBC Young Musician of the Year as a pianist – has no doubt about what makes the NYO so special. “Everyone arrives with this unbridled enthusiasm, and when we’re all together, the energy is quite exceptional,” he says. “And because we’re all striving to make the concerts the best they can be, there’s an incredible discipline and focus at the rehearsals.” The combination of those two factors, he feels, is what brings such inspiring results.

The NYO can’t become El Sistema, but it can be inspired by what it stands for. “I think the link between the two orchestras is that we are all so into the music,” Melanie Rothman comments. “Perhaps because they don’t have much else where they come from, they throw their whole selves into it. They don’t play one note without all the feeling they can possibly give.”

So the Venezuelans’ influence is acting as a shot in the arm; the NYO’s task is to pass on that fire-in-the-belly to younger children around the UK who could follow in their footsteps. The results will show long-term. But the possibilities are tremendous, because the NYO’s delight in music-making has always been at the heart of their performances, and still is. They may not be Latin, they may come from suburbs rather than slums, but in a very British way they’re the closest thing to the SBYOV that we have.