Not an April Fool's joke... 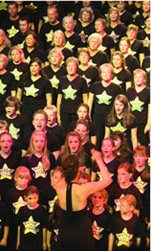 While the G20 meets in London, Obama's motorcade evades the cameras (so where was he? was that an April Fool's moment?), the world economy melts down and all the rest of it, there are encouraging signals about what music can do to carry us through. And that isn't a joke.

BBC Breakfast - yes, them again - today broke ranks with school-dinner reporting and waiting for Obama in a place he wasn't by running an amazing item about ROCK CHOIR. Over in Guildford, the dynamic Caroline Redman Lusher is running a choir that sings rock music, has no auditions and involves more than 300 people who all look as if they are having absolutely the time of their lives. And they sound fabulous. A quick investigation of the Rock Choir website reveals that there are choirs for all ages from 6 upwards. According to the BBC the aim is to get another 60 choirs of this type going all over the UK; there are already more than a dozen in the south-east.

The people they interviewed today were glowing with joy. Most of them never thought they could sing. Some of them had been chucked out of their school choirs years back. The Times ran an article about the phenomenon last week and reveals that the bug for this is spreading like wildfire, not least in the City despite the widespread job losses - perhaps because of them? It's all about joy, connection, music, release...

Having not sung since school, I'm wondering whether to have a go.

Meanwhile our friend LondonJazz - whose pithy, informative and newsily active blog was, I'm happy to say, at least partly kick-started in my Kick-Start course! - has been busy interviewing. For LJ, it's not enough just to break the news, ignored elsewhere, that the Royal Opera House has axed its jazz performances in the Floral Hall - why?! Too much fun? - or to fuss, when fuss needs to be made but isn't elsewhere, that the BBC has axed its jazz awards. He also offers exclusive interviews with some of the best jazzers in town and his latest, with Gilad Atzmon, is well worth a read and worth a visit to the gig too.

"The BBC has very little good news to give out. Which is why I see a doubling of the audience at my gigs. People prefer to come out and listen to Frank (Harrison, Atzmon's regular pianist) or Gwilym (Simcock) than stay in and hear Jeremy Paxman. Because what we can do is to remind people what beauty is."

The whole experience was like a strong jazz solo. I was being told a story which gathered intensity and heft as it developed.

Next, he wants me to go to the Goettingen Handel Festival. And put this idea forward pre-1 April. I may do it.