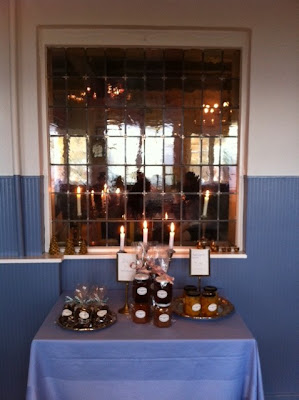 That's JDCMB Ginger Stripe Awards 2011 in Danish, or sort of. This year we have abandoned the usual Cyberposhplace - too many people around there to whom we don't wish to be polite - and booked instead a very special CyberScandinavian venue: a Virtual version of the Sjette Frederiks Kro, tucked away in the beech woods by the sea in Aarhus. Please come in and thaw out by the log fire. And don't miss the hot chocolate. It's the best in the whole world - even better than the Cafe Europejska in Krakow - and they bring you a goloptious full-up pot of it... Prepare to sing, too. The Danes always sing at parties.

This has been the year in which the Sleeping Beauty woke up (see choreographer Matthew Bourne's project for Christmas 2012) - and didn't much like what she saw. This year it was revealed, loud and clear, just how intensely, insidiously and pervasively big money rules the world and the music world with it, trampling on all and sundry that are left behind. This year, too, we've seen - on our own doorsteps - the danger of all ideologies that put the imposition of their dogma and the crushing of dissent before any notion of basic humanity. Heaven alone knows what 2012 will bring, but my words to you today, on the Winter Solstice 2011, are these.

Beware of anything that threatens the democratic nature of the places, societies and organisations in which you function. Never sign away your rights - someone will try to convince you it's in your own best interests, but it never is. Remember that constitutions exist for a reason, and if anyone wants to change yours, take a good, hard look at who, how, why, and who gains (case study: Hungary). To quote this article from Spiegel Online about culture in Hungary - where journalists this week have been on hunger strike against press manipulation - "to gain complete control over a country, one has to control what people think." This doesn't only apply to countries. Now that you're awake, keep your eyes wide open.

In a skewed and shaky world, it's more difficult, yet also more important, to keep up the celebration of the Ginger Stripes. Solti is back on his silken cushion today, and I've promised him a lot of fresh Danish fish.

This year's awards are taking a slightly different format from the usual. Instead of specific categories, we've just chosen specific people. Through 2011, more than ever, my interviewees have been a source of great joy and inspiration. I've been lucky enough to come into contact with an astonishing succession of individuals; with each of them there is much to learn, nuggets to nurture, jewels to treasure. I've also attended some unforgettable performances. And writing a little more about dance - which was my first love, you know - has brought a welcome new dimension and a different type of challenge. You think it's difficult to write about music? That's a piece of cake by comparison...

Now, to business! A round of applause, please, for our special guests: some of this year's top interviewees. As they approach the silken cushion to stroke the ginger stripes and claim their prize purrs from Solti, plus a VirtualSarahLundSweater, meet them, love them and thank them.

Anna Caterina Antonacci - the Italian mezzo/and/or soprano whose artistry stands out in today's operatic scene like a George Eliot novel surrounded by chicklit. Is she the nearest thing we have to Pauline Viardot? I believe so. Article from Opera News. Below: as Cassandre in Les Troyens - which she will be singing in London next summer.

Martha Argerich. Interviewing her was a challenge I never imagined I'd meet, but...somehow...did. In the words of Yannick Nezet-Seguin, who conducted the concert in Rome that I attended: "...is she still playing as well as ever? Of course she is. Why wouldn’t she? To me she is not 70, or 60, or 20. She is just Martha.”

Gustavo Dudamel. Cometh the hour, cometh the Dude. Again, it was all touch and go, but in the end we touched. What energy. What charisma. Go, Gustavo, go: be the next Bernstein. We need one. Better still, be the first Dude.

Andras Schiff. A great man as well as a great musician: speaking out about the rise of the racist far-right in his native Hungary has landed him with a backlash that's made him wonder if he can ever return - though that does rather prove the veracity of what he said. Meanwhile, Beethoven is eternal...

Benjamin Grosvenor. This has been his year. Let's put aside the many landmark events he's experienced - we've marked them amply on JDCMB - and simply consider this: Benjamin's playing leaves me wondering why not every pianist plays like that, and why anyone would think, for a moment, that anything less will do. Here he is having some fun with an encore at the Prom...

Eva-Maria Westbroek. Interviewed her, loved her, loved her singing. I heard her in three astounding performances. First, Anna Nicole, which threw her into a spotlight the size of the Millennium Dome but with rather more substance within - and not only silicone. Then Sieglinde in the Met's cinecast of Die Walkure, singing opposite Jonas Kaufmann as Siegmind. And finally Il Tabarro at Covent Garden, part of Richard Jones's magnificent production of Il Trittico, which I didn't actually write up, but which was a major highlight of this year's opera-going. Here she is in one of her favourite roles, Shostakovich's Lady Macbeth of Mtsensk.

Sergei Polunin. The 21-year-old Royal Ballet star really does want to open a tattoo parlour. The day after the cinecast of The Sleeping Beauty last week, JDCMB was carpet-bombed by Google searches for this dark-lord-in-waiting of British ballet. In this clip, Lauren Cuthbertson as Aurora is equally poetic.


Zofia Posmysz. The author of The Passenger, a novel based on her own experiences in Auschwitz, could not be more radiant or less embittered if she tried. She came to London for the UK premiere of the opera by Weinberg based on her book. Talking to this remarkable woman was a very humbling experience. Film below in Polish with German subtitles, except the bits in English from David Pountney, and provides a taste of the opera's furious, devastating music. (It got panned in London, but I couldn't care less.)

Rolando Villazon. First I heard his marvellous Werther at Covent Garden; then, at the crucial moment in September, I went to Paris to meet him. He gave me a red foam nose. It is now on my desk lamp, where it has helped to keep me sane these past months. This song from last week's Royal Variety Performance sums it all up. Thank you, Dr Rollo.

And performances? It's a golden age. It really is Joseph Calleja at close quarters at a Decca launch in the ROH Crush Bar; Jonas Kaufmann in recital at the Royal Festival Hall. The Budapest Festival Orchestra and Ivan Fischer at the RFH (the best Beethoven Pastoral Symphony ever) and the Proms (Mahler 1 and the fun, engaging, wonderfully played Audience Choice event). The cinecast from the Met of Die Walkure, where the cast - Eva-Maria Westbroek as Sieglinde, Jonas Kaufmann as Siegmund, Bryn Terfel as Wotan and Deborah Voigt as Brunnhilde - had us all pinching ourselves to make sure it was true. Despite my reservations about the detail of cinecasting, it's a great new medium that's transforming our experience of opera, theatre and ballet; and through this medium the Met also brought us Rossini's fabulous Le Comte Ory, with Juan Diego Florez, Diana Damrau and Joyce DiDonato. At the ballet, Osipova and Vasiliev rawked Ashton's Romeo and Juliet; and, as I couldn't interview Tchaikovsky about The Nutcracker, Joby Talbot was a fascinating alternative as he told me about his new score for Alice. Another major highlight: revisiting the Dartington Summer School of Music. It's always strange going back to a place that meant so much to you so long ago - but the old magic is still alive and well.

Huge treats, too, in performances of my own stuff, some on the other side of the globe. Roxanna Panufnik's beautiful choral work Let Me In, for which I scribbled the words, was premiered by Chanticleer in San Francisco in the spring and is now out on CD. In July, Piers Lane's Australian Festival of Chamber Music in Townsville gave the first performance of Sins of the Fathers, my words-and-music project about Liszt, Wagner and Cosima (it's not quite Lisztomania, but hey...). Hungarian Dances with Bradley Creswick and Margaret Fingerhut at Potton Hall and Old Swinford Hospital School, was huge fun - and I'm happy to say we're taking it to the Buxton Festival next year.

A reading of A Walk Through the End of Time - my Messiaen play - at East Sheen Library bore fruit: an enthusiastic impresaria was present, liked it and is currently arranging a new lease of life for it, featuring two superb actors - Susan Porrett and Patrick Drury - as well as the considerable massed talents of Viv McLean (piano), Tamsin Waley-Cohen (violin), Matthew Hunt (clarinet) and Gemma Rosefield (cello), starting with a showcase concert at Bob Boas's central London salon on 9 January. More news soon, I hope.

And in case you wondered - yes, I am writing another novel. Slowly. It's different. It's historical. It's unbelievable. And it's all true.

Dear readers, we live in interesting times. I hope that we can make them turn out for the best. Please raise a glass as our stars of stage and page step forward and lead us in a rousing, celebratory Danish Xmas song. Now, come on, everyone - we have to dance round the tree. Did I mention that? No? Well, we do...
Posted by Jessica at 7:43 am