On the future of music journalism

Here are a few thoughts I've cobbled together in the wake of last week's panel discussion at Classical:NEXT. A few things I aired there, a few that happened there, some that there wasn't time to air and one or two that have come to mind since. Just a tuppence-ha'penny, really. (Below, a pic from the panel: L to R, Oliver, Carsten and me.) 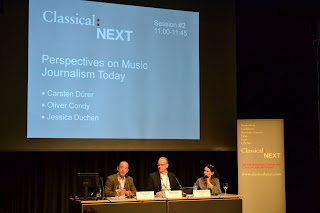 On 1 April I put out a spoof blogpost announcing that henceforth every music critic would be obliged to audition as a musician for the conductor Valery Gergiev. Imaginary quotes took differing standpoints: readers deserved the assurance that those pontificating knew what they were talking about, but it’s also true that some musicians can’t string together a proper sentence. To my amazement, some people actually fell for this. Perhaps it inadvertently contained a little truth. What can the future hold for a specialised area that first of all depends on two skills – musical knowledge and writing ability – that are dwindling in the education system; and that secondly remains inextricably linked to the prospects for print journalism in general?

Music journalism may sound like an ivory tower, but the issues that affect it are the same ones that apply to everyone in the wider creative industries. The question of education, or lack of it, is especially alarming. The UK’s arts and humanities courses in higher education, including the music colleges, are about to lose all their state funding; and musical education at school is a lottery. As for grammar, my first advice to youngsters who want advice on entering music journalism is all too often: “Read Eats Shoots and Leaves.”

With classical music no longer an accepted part of everyday life, the topics we cover have changed in the past few decades. When I first went into music journalism, after an academic and pianistic training, I thought I’d be interviewing my favourite musicians and conveying their hoped-for words of wisdom. Now, though, this would be seen as something for specialists: space is limited and “good musician” isn’t reason enough to fill it. We have to find topics of wider general interest – and work with the trend rather than against it in order to keep this art in the public eye at all.

The future of music journalism depends on much more than our ability to do our jobs well. This came into sharp relief during our panel discussion at the new classical music trade fair in Munich, Classical:NEXT. My fellow panellists were two highly respected editors, Oliver Condy of BBC Music Magazine and Carsten Dürer of the German journal Piano News. Both passionately defended print, and Oliver Condy pointed out, quite rightly, that music journalism must be recognised as the skilled profession it is, and should be respected and remunerated accordingly. Up went a hand in the audience: a woman from New York told us that her younger friends and colleagues read only online, and won’t pay for anything. Another delegate suggested that the future may lie in streamed exclusive videos. Yet print journalists - and writers who love language for its own sake - aren’t always renowned for simultaneous expertise in digital film editing.

The Internet, obviously, represents the biggest shake-up in human communication since the introduction of the telephone, if not the printing press. It’s no wonder if there are teething problems while we work out what to do with it. An audience member asked about my blog and why I write it for free. Easy: it’s an accident. Eight years ago, when blogs were relatively new – it seemed a good way to keep in touch with friends in far-flung places. Today, though, Facebook and Twitter serve that purpose, and just about everyone blogs. So now it’s time-consuming and it doesn’t buy the cat food, but friends say I mustn’t close it down because it is “part of my personal brand”.

Blogging has become a sort of “value-added” model: you hope that if readers find and like you, they’ll buy your newspapers, magazines and books. In the blogosphere too, though, things are in a state of flux. Discussion has grown more immediate: by the time a post is written, it’s likely the topic will already have been done to death on Twitter. Meanwhile this twilit world has morphed from a mutually supportive, creative environment to something more combative. Online anonymity is pernicious, promoting false “reader reviews”, cyber-bullying, prejudice and hysteria. I suspect one day it will be quashed once and for all – though something frightful might have to happen first.

Technology moves faster than we can. What we can’t afford to do is ignore that technology. We haven’t got it right yet, but we do need to seize opportunities to make this medium work for us, not against us. Obviously that’s easier said than done, but the first step is embracing the notion and ditching the fear. We’re supposed to be a creative industry; it’s up to us to be creative. And if we “creative people” lack the necessary business and technology skills – let’s face it, some of us would be mincemeat on The Apprentice – then perhaps we should jolly well learn some.