Brendel, Lewis and a lorralorra mountains

Look who I saw yesterday.

I'm in Lucerne, of course. In November, the pianists take over the town. The Lucerne Festival is now not just a summer thrill, but a specialist haven for piano buffs in the unlikely month of November. Last night Paul Lewis (centre) performed the last three Schubert sonatas; and first his one-time mentor (left), who needs no introduction to JDCMB readers, gave a lecture about the works, playing extracts of them, and describing them as a "family" of works with some fascinating motivic connections to explore. (The proud gentleman on the right is Tom Hull, agent to them both. No wonder he looks happy.)

I've been privileged to follow Paul's career for the past 20 years and watching him grow from hugely gifted student and competition prizewinner to one of the finest Schubert players around has been a treat from the beginning. He is especially good at conjuring the "distant" world of Schubert through a touch that is as soft as fur and filled with sensitivity to inner echoes, hints of far-off bells, haunted by an invisible Lieder singer. Parts of his performance were perfection, and that's not a phrase I would use lightly: the slow movement of the B flat and the last movement of the A major stood out as moments in which I could almost imagine I was listening to Schubert himself. Occasionally one wants more sense of fear, the feel of living under the Sword of Damocles that Schubert faces head on in the A major slow movement's encounter with hell, or the C minor's Erlkoenig-like dance of death finale. But frankly, that is splitting straws: it was a mesmerising and unforgettable evening.

Playing all three of this final trilogy in succession remains a programming quirk that I, personally, am not entirely comfortable with. It always seems, whenever I hear them done this way, that the C minor, which goes first, doesn't come off as perfectly as it should; and the B flat, which goes last, sometimes misses its exposition repeat, which really should be mandatory, but you can't help reflecting that by this time we are all very, very exhausted by Schubert's intensity and his 'heavenly length'. I feel we might appreciate each work more were it to be performed individually as part of what another pianist I'm hearing here tomorrow has been known to call a "mixed salad" programme.

Meanwhile the jazzers are out in force. Lucerne has a variety of exquisite hotels, the bars of which are transformed into jazz piano outlets for the festival duration. Today at teatime Simon Mulligan is performing in the one downstairs from where I'm now writing; last night we could wind down after the Schubert by listening to the veteran Johnny Varro there, with a lovely young couple excelling at an impromptu spot of Lindyhop and Ceroc. A number of jazz pianists are resident in the festival and circulate between the venues; trotting between them to compare and contrast is becoming a pastime of choice for enthusiasts of all descriptions. It's also a great way for the festival to draw the whole town in to the festival and perhaps persuade people who mightn't choose a full-blown recital to give it a go. And the festival academy remains active now as ever, with masterclasses for fortunate young pianists given last week by Leon Fleisher.

Not that Lucerne has to do very much outreach. I was aware, interviewing festival director Michael Haefliger yesterday, that his comment "We do OK," is probably understatement of the year.

View from my window: 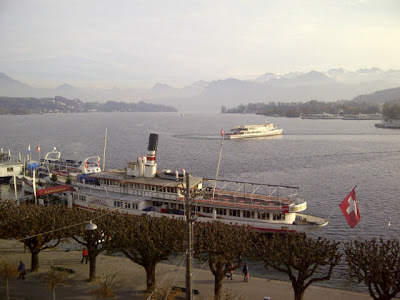