Whatever happened to ROBERT LE DIABLE? #1

The Royal Opera House is staging Meyerbeer's vast and influential opera for the first time in 122 years on Thursday next. I've been delving into its background and am happy to bring you our own little JDCMB series on it.

First, here is my article for today's Independent: The man who made Wagner mad. Below, please find the director's cut, which involves more detail and more quotes from the fantastic Professor John Deathridge. And before that, a video from the ROH in which the director Laurent Pelly discusses the opera.

Was Giacomo Meyerbeer the man who turned Richard Wagner anti-Semitic? Thereby hangs a tale almost as convoluted as Meyerbeer’s opera Robert le Diable, which is about to be staged at the Royal Opera House, Covent Garden, for the first time since 1890. Once, this opera was ubiquitous. Chopin and Liszt produced works based on its melodies; it was painted by Degas, quoted by Korngold, lampooned by Gilbert and Sullivan; the list of cultural references could go on. Yet Meyerbeer’s reputation has been so tangled up with Wagner’s slurs against him that perhaps it has simply never recovered.

Robert le Diable secured Meyerbeer’s dominance in the operatic world of Paris. It was 1831 and the German-Jewish composer was 40 years old and in his prime. He was born Jacob Meyer Beer into a wealthy banking family in Berlin in 1791; in childhood he was a brilliant pianist, making his concert debut aged 11. He cut his compositional teeth on light opera, singspiel; next, he spent nine years studying and composing in Italy. Having achieved considerable repute, in 1825 he set out to conquer Paris and – as Berlioz put it – he had not only “the luck to be talented, but also the talent to be lucky”. And he thought big. The French taste for grand opera fêted the lengthy, the melodramatic, the showy, the hummable, the fantastical. Meyerbeer gave them everything they wanted.

In 1839, Meyerbeer got to know a young German composer who approached him to solicit his help: one Richard Wagner. And at first Wagner scraped and crawled to Meyerbeer in terms that would not have disgraced Dickens’s Uriah Heep: 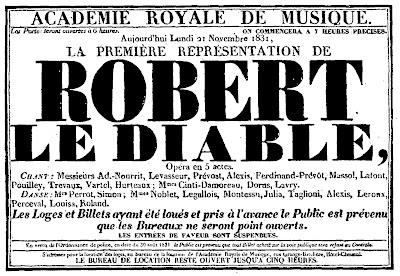 “But my head and my heart are no longer mine to give away - they are your property, my master; - the most that is left to me is my two hands - do you wish to make use of them? - I realise that I must become your slave, body and soul, in order to find food and strength for my work, which will one day tell me of my gratitude...”

Professor John Deathridge of Kings College, London, author of Wagner Beyond Good and Evil (California Press, 2008), confirms that Wagner not only sought Meyerbeer’s support, but modelled himself – and some of his works – upon the older composer and his operas. While working at the opera house in Riga, Wagner even conducted Robert le Diable and arranged one of its arias for string ensemble. And he received the assistance he sought: Meyerbeer, a generous spirit with his feet firmly on the ground, intervened to prompt stagings of Wagner’s early operas Rienzi and Der fliegender Höllander (The Flying Dutchman).

“Wagner was hugely influenced by Meyerbeer,” says Deathridge. “Act II of Die Meistersinger von Nürnberg would never have existed without the model of Act III Meyerbeer’s Les Huguenots. Meistersinger is a grand opera with all the historical scenes characteristic of that tradition – delivered as if Wagner is trying to outdo Meyerbeer.”

Wagner’s volte face against Meyerbeer looks almost predictable: perhaps an inevitable revolt against someone who has committed the cardinal sin of being too successful, too popular and too wealthy. Besides, Meyerbeer had intervened to have Wagner’s Rienzi staged in Berlin, he was an easy target for Wagner to blame when the opera was a failure. And the fiasco of Tannhäuser’s premiere in Paris –when furious Jockey Club members protested about the ballet being placed right at the beginning – left Wagner with a grudge against the French capital and all it stood for: commercial grand opera with formulaic structure, epitomised, of course, by Meyerbeer.

His tracts against Meyerbeer are poisonous indeed. “As a Jew, [Meyerbeer] owned no mother-tongue, no speech inextricably entwined among the sinews of his inmost being...” is a typical example. By the time he penned his notorious anti-Semitic tract Das Judenthum in der Musik (first published anonymously in 1850), his antipathy towards Meyerbeer was embedded in its accusations that Jews were only interested in art for the sake of commerce. Later, says Deathridge, Wagner censored his own writings to wipe out any sign that he had ever admired Meyerbeer or owed anything to him artistically.

“Meyerbeer became the bête noir to Wagner – but also to other German composers, including Schumann – as a symbol of what’s wrong with culture, of the capitalist way and the commodification of art,” Deathridge explains. “There was general feeling among them that French music was destroying true art because of its commercialisation, and that Meyerbeer was the principal villain.” 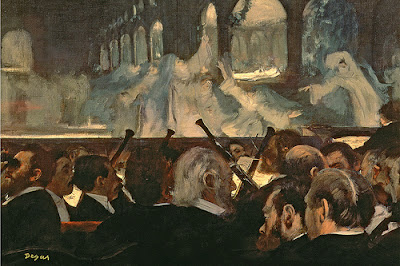 Today Meyerbeer has been out of the picture for a long time. First, his music was overshadowed by both Wagner and Verdi; later it was banned by the Nazis. And the tenor Bryan Hymel, who sings the title role in Robert le Diable at Covent Garden, thinks that the extreme vocal demands of this opera have probably contributed to its neglect: “It’s the hardest thing I’ve ever had to sing,” he declares.

Has Wagner’s lingering influence banished a gem from our theatres? Or will Robert le Diable prove to be a white elephant? Now, at last, London audiences have a chance to make up their own minds.