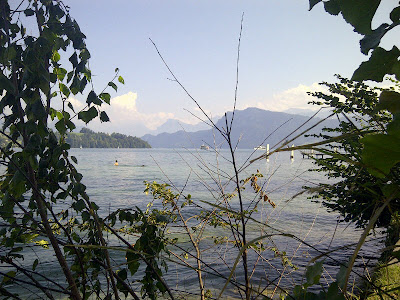 As locations for music festivals go, it really ain't bad. This is Lake Lucerne, snapped from the shore at the bottom of Wagner's lawn at Tribschen. I spent a happy afternoon there, working on the revision of my new play Sins of the Fathers, which is set...um, at Tribschen. Pure coincidence, but nice. (The premiere, 24 November, is selling fast...)

I was really there to attend two concerts in the Lucerne Festival, one conducted by Sir Simon Rattle, the other by Jonathan Nott. Somewhat amused to see the heading "Viva la revolucion!" on the programmes. In Spanish. One concert was of Viennese and Russian music, the other was Wagner's Das Rheingold (part of Lucerne's first-ever Ring cycle). Few festivals have a less revolutionary atmosphere - the glorious lakeside and the wonderful acoustic of the KKL are populated by the sleek and meek of the moneyed festival circuit - but nevertheless, the programming is absolutely sterling and below the gleaming surface the waters are deep and fertile, especially where the Festival Academy is concerned. My review is out now in the Independent, here: http://www.independent.co.uk/arts-entertainment/classical/reviews/classical-review-british-conductors-bring-the-sounds-of-revolution-to-the-lucerne-festival-8794619.html
Posted by Jessica at 2:31 pm