If you've been wondering where I am... My beloved cat Ricki has been desperately ill. He is just home after 10 days in vet hospital and we're feeding him a lot of fish to build up his strength. I've been preoccupied, sleepless and unmotivated for blogging. Meanwhile, though, the Royal Philharmonic Music Awards are coming up next week, and the wonderful Rosemary Johnson is stepping down as executive director. I was keen to offer a tribute to her, so can only send my profuse thanks to Jack Pepper, our youth correspondent, who has written what follows. (This is a longer version of a piece which has appeared in the BBC Music Magazine website.) JD

TRULY PHILHARMONIC
A tribute to Rosemary Johnson, by Jack Pepper 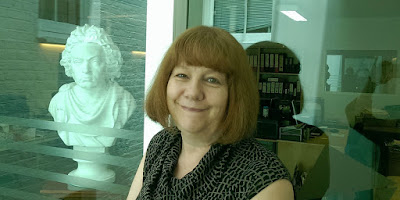 Starting out in the classical music world is never easy. Commissions lead to commissions, performances to further performances, but this relies on an initial opportunity to get you started. There is no flame without a spark. In December 2017, one very notable inspiration in classical music, someone who has sparked many a career – the Executive Director of the Royal Philharmonic Society (RPS), Rosemary Johnson – announced that she will be standing down from her position.

Rosemary Johnson has led the commissioning organisation and music charity for 20 years, supporting over 100 young musicians annually through commissions, conducting schemes and bursaries. Rosie has overseen the incredible transformation of the Society from a small London-focused organisation into a nationwide community of music-lovers.

It has become one of the pre-eminent forces for change in the classical world, not least through the annual RPS Music Awards, a ceremony that Rosie has placed at the forefront of the Society’s work. The Awards recognise the greatest achievements in live performance over the previous year, and Rosie’s determined and passionate leadership has ensured the accolades are among the most respected in the world. Since she took charge of the organisation in 1998, RPS Award winners have included pianists Stephen Hough and Maurizio Pollini, conductors Daniel Barenboim and Antonio Pappano, and singers Sarah Connolly and Roderick Williams. The list of winners reads like a who’s-who of classical music, and Rosie has played an enormous part in creating this. Clearly much-loved by the industry, every professional musician I have come across has smiled at the mention of her name. Her legacy is the enhanced reputation and voice given to classical musicians, and what a legacy that is to leave.

The RPS has been one of the great starting points in my musical career, co-commissioning a composition of mine with Classic FM for the station’s 25thbirthday. Without a platform, without momentum and without the motivation this all brings, it would be profoundly more difficult to launch a musical career.

I remember feeling rather daunted when, at a photo shoot at Classic FM’s studios in London, I was informed that ‘the Executive Director of the Royal Philharmonic Society will be arriving shortly’. There’s something about the long job title, as well as an organisation with such an illustrious history, that suggested a level of distance. The word ‘Society’ so often seems to evoke a rather sober meeting of serious-minded traditionalists, talking about doing things whilst not doing them.

But the RPS is far from this. Rosie was the greatest advert for classical music from the moment we met. Here was someone who was willing to take risks, try new ideas, and who always wanted young musicians to feel supported as they made their first steps into the profession. This genuine support of their musicians is made clear by one fact; I learnt with surprise that a member of the RPS team attends every premiere of their commissions. What better way to make a young composer feel appreciated?

In promoting the work of new voices, Rosie has kept to the greatest traditions of the RPS. Founded in 1813, it was originally intended to encourage instrumental concerts in London at a time when no permanent orchestras or chamber concerts existed in the capital. With five permanent home-based orchestras, 21st-century London is a global music hub. At the centre of the city’s classical music scene is the RPS.

Commissioning new works has long been at the heart of the organisation. The Society famously commissioned Beethoven to compose his Symphony No. 9, as well as Mendelssohn’s Italian Symphony. Today, the RPS remains dedicated to the development of new composers, having commissioned 170 new pieces since 2000. Throughout the entire 20thcentury, the RPS commissioned just 16 new works.

Despite having a permanent staff that you could count on one hand alone, Rosie has given young musicians like me the opportunity to get our voices heard for the very first time. What some musical heavyweights would see as a risk, Rosie sees as an exciting opportunity. The classical world needs more people like her.

At a time when some question the future of classical music, Rosie is determined to make a difference. Where others comment on a situation, Rosie is busy getting stuck in. Perhaps most worthy of recognition is her deeply-held conviction that classical music deserves to be celebrated, that this is a genre we are right to feel proud of. This love of music is its greatest possible advert. It seems ironic that one of the key figures driving the RPS Awards has herself yet to be fully recognised.

The RPS points out that the word ‘philharmonic’ describes a person or institution that is ‘music-loving’. With her extensive support of young musicians, her open-mindedness in considering new ideas, and her dedication to raising the profile of classical music, Rosie Johnson is undoubtedly ‘music-loving’. She is philharmonic in the greatest sense.