Nothing is certain, only the certain spring

A surreal time indeed, but a revealing one. I am going to be on Radio 4's Front Row this evening, talking about contraltos. Normally this would feel exciting, challenging and fun. Today it seems the most peculiar prospect. I was going, originally, to go to Salford. I was hoping to meet the team, see my Manchester friends and go on a tram (something that can thrill you equally whether you're a small child or a half-century older one). Instead I will be in my study, on Skype. But we can still do it.

Speaking of technology, I am trying to figure out a way to go live on the internet reading to you in chunks of 15 mins each day. A sort of Jessanory (instead of Jackanory). Unfortunately, as technology grows better, my brain cells grow worse and I had a shot at Facebook Live only to find that the sound wasn't working properly and I have no idea how to fix this. I'll keep trying and report back.

Meanwhile, I exhort everyone to take care of themselves, and that goes for mental health as well as physical. It turns out that the simplest, easiest and most direct way to do this is to have a really good walk.

Yes, exercise is as important as they say. We have made a resolution to get out for a walk every day, and going to Richmond Park, which happily is our nearest big green space, is truly curative. You see people doing normal stuff. Throwing balls for muddy dogs to chase. Families insisting their little ones keep their coats on. Joggers in weird running shoes and bright blue leggings pushing three-wheeled baby-buggies containing bemused kiddiwinks (yes, this is Richmond). And trees. Big, ancient, rugged oaks that renew themselves each year, century after century. I occasionally hug them, I'm afraid.

Not these ones, though. These are willows on the waterside. Going green. 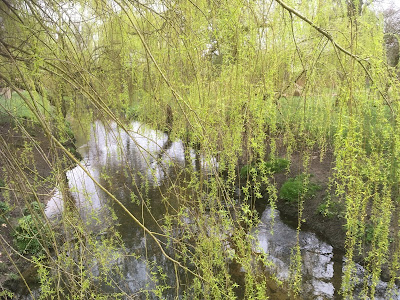 It puts me in mind of one of my favourite poems, The Burning of the Leaves by Laurence Binyon. It is a poem of autumn - but also, in a way, for the renewal of life, something we need to remember.

Now is the time for the burning of the leaves.They go to the fire; the nostril pricks with smokeWandering slowly into a weeping mist.Brittle and blotched, ragged and rotten sheaves!A flame seizes the smouldering ruin and bitesOn stubborn stalks that crackle as they resist.The last hollyhock's fallen tower is dust;All the spices of June are a bitter reek,All the extravagant riches spent and mean.All burns! The reddest rose is a ghost;Sparks whirl up, to expire in the mist: the wildFingers of fire are making corruption clean.Now is the time for stripping the spirit bare,Time for the burning of days ended and done,Idle solace of things that have gone before:Rootless hope and fruitless desire are there;Let them go to the fire, with never a look behind.The world that was ours is a world that is ours no more.They will come again, the leaf and the flower, to ariseFrom squalor of rottenness into the old splendour,And magical scents to a wondering memory bring;The same glory, to shine upon different eyes.Earth cares for her own ruins, naught for ours.Nothing is certain, only the certain spring.