Stop press - Rolando Villazon is off for surgery on a cyst on his larynx. Werther in Vienna this May will need a new tenor and forthcoming appearances in Berlin and Hamburg are off. Owch.
Posted by Jessica at 3:06 pm

A second-hand report from the London International Piano Competition 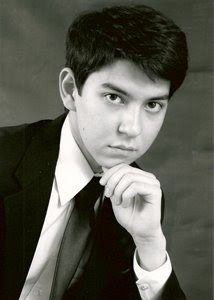 Meet Bezhod Abduraimov, 18-year-old Uzbekistani winner last night of the London International Piano Competition. A little internet research tells us, among other things, that he has been scooping prizes left, right and centre recently and is studying in Kansas City with Stanislav Ioudenitch.

Alessandro Taverna of Italy won second prize and Andrejs Osokins of Latvia third. I wasn't there (went instead to the Wigmore to hear Razumovsky Ensemble with Philippe and Claire playing Faure G min Piano Quartet, and very wonderful it was), but Tom was playing in the orchestra and arrived home rather excited.

Abduraimov, he says, got a standing ovation for his Prokofiev 3 - for those of you overseas, this is very unusual at the Royal Festival Hall - and seemed "the business". He tells me this: "He had a wonderful attitude from the start - at the rehearsals he seemed very relaxed and was looking forward to the concert. Everything sounded and felt right." And ultimately: "He was amazing!" A friend who attended tells me exactly the same thing.

I found this interview with him in Star Magazine of Kansas City, where he was featured as an 'Emerging Artist' of 2008:

The first thing to get past is the pronunciation of his name.

After that, Behzod Abduraimov seems like any other good-natured 17-year-old. He has a quick wit, an infectious laugh and dark eyes that burn with intensity.

But BECH-zod (with a mildly guttural “ch”) Ab-du-ra-EE-moff is no ordinary kid. He’s one of the most remarkable pianists of his generation.

The Uzbekistan native has been performing on the stage since elementary school.

He’s performed the Tchaikovsky Concerto No. 1 with orchestra “like 20 times.”

In recent weeks he sailed to easy victories at two competitions in Texas, most notably the Corpus Christi International Piano Competition.

He could have studied with any teacher in the world but instead of Juilliard or Berlin he decided to study at Park University with Van Cliburn gold medalist and Park professor Stanislav Ioudenitch.

“My whole family played piano,” says the Tashkent native and undergraduate, who learned English lickety-split after arriving here a little more than a year ago.

His family is Muslim, like 88 percent of Uzbekistanis. His mother, Gulsun, taught him and his three siblings piano, starting Behzod at age 5.

His father, Abdurazzak, was a physicist who taught at the university in Tashkent and invented a car that ran on oxygen.

When Behzod was 10, his father died suddenly of a heart attack.

His mother had prepared the traditional lamb pilaf for his birthday dinner. His sister came home suddenly, upset: “Turn on the TV.” The fall of the World Trade Center put a pall on dinner.

There were other twists along the way. He suffered severe food allergies from birth, which caused his skin to break out in oozing rashes for years.

“You can see it in videos of me then. I looked like Quasimodo.”

The reaction was treated successfully, finally, by an herbalist who prescribed a Tibetan herb. Behzod still takes it daily.

He remains a faithful Muslim, praying twice a day and practicing around the clock in the piano studios beneath Park’s Graham Tyler Memorial Chapel.

His goal is “to show what a composer wanted to say through his music.”

He came to Ioudenitch after a lesson he took with him in Lake Cuomo, Italy. “He found so many interesting things just in the first page,” he says.

Ioudenitch wanted him as a student the minute he heard him play.

“There are millions of performers, good performers with wonderful technique, but not every one communicates this energy,” Ioudenitch says. “Besides his great technique, he really communicates. He has his own ‘face.’ ”

Behzod’s hobbies include Internet video games. He can’t wait for “Grand Theft Auto IV,” which takes place in the city he hopes to live in some day: New York.

“You feel like you’re free in the city to do anything you want,” he says of the game’s therapeutic value.

“I hope I can be a pianist. Not just any pianist. A pianist people need, who can give people something incredible — who can make people happy.”

He will be back to play a concerto with the LPO - always part of the LIPC prize roster - so I shall look forward to hearing him then.

Meanwhile I'd better call the friend I saw on the train into town last night and explain that when I said Tom was playing in a piano competition, I didn't mean he was playing the piano...
Posted by Jessica at 7:31 am

Zimerman at 19 plays Chopin Concerto no. 1

Just found on Youtube. Teenaged Z with Krakow University Orchestra under Jan Krenz, recorded in 1976. This is the slow movement - the rest is out there too. It's the most sublime Chopin I've ever heard, and I've heard quite a lot.

Apropos de USA, enjoy this 'recession singalong' of a West Side Story remix from award-winning (and marvellously named) Walt Handelsman of Newsday... 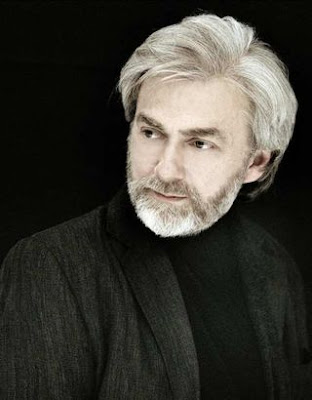 Massive fuss in LA after Krystian Zimerman used his recital debut at the Walt Disney Hall to criticise America's foreign policy and to declare that he will never play in the USA again.

About 30 or 40 people in the audience walked out, some shouting obscenities. “Yes,” he answered, “some people when they hear the word military start marching.”

Others remained but booed or yelled for him to shut up and play the piano. But many more cheered. Zimerman responded by saying that America has far finer things to export than the military, and he thanked those who support democracy.

There will always be those who tell musicians to shut up and play their music, including, sometimes, other musicians. Including even Opera Chic, who surprises me by doing so.

Also a lot of people don't have much clue about why America's effect on Poland should be an issue right now. I suggest reading up here (summary: Poland rushes into Iraq on America's exhortation when Germany said no way Jose) - and there's the small matter of America's plans to install a missile defence shield on Polish soil, which many Poles regard as effectively a military occupation and a potential provocation to Russia. Not to mention the economic fallout from America in Poland, for which please refer to Naomi Klein's The Shock Doctrine...

It sounds as if Krystian had plenty of support. If the world's leading musicians don't make a stand, then who will? I applaud his actions wholeheartedly, and only wish he'd done it a few years earlier.

If any Americans are wondering what they're missing by losing Krystian, just have a look at this review from Seattle which appeared the other day. Update: and this one from the LA concert itself.

Or simply watch this.

As for the various people who are saying "nobody cares what artists think" - that's not correct. They do. Otherwise there wouldn't be so much fuss.

And yes, I'd be pretty cross too if some idiot pulled my Steinway Model D to pieces because the glue smelled funny.

UPDATE, Tuesday 2.20pm: Responses to Zimerman in the press are starting to filter through, so I will update this post as and when, rather than adding extra posts. Here is the first: excellent piece by Tom Service, the Guardian's classical music blogger, saying Zimerman did The Right Thing.

Wednesday: Shirin Sadeghi in The Huffington Post: "In this age of vapid celebrity personalities who gurgle amidst a significant burgeoning of global political consciousness, too few of the high profile artists of our world offer anything in the way of honest political awareness. Krystian Zimerman is an exception to be admired. "

And an editorial in The Guardian (the one British newspaper whose editor is an accomplished pianist himself): "Poland has a heritage of patriotic and political pianists that stretches from Chopin himself through the nation's virtuoso post-first-world-war prime minister Jan Paderewski. To that tradition, now add Krystian Zimerman, an exceptional musician - and more."

UPDATE: Fellow piano glory Stephen Hough in the Telegraph blogs on moral decisions re concerts, from Sars to swine flu to this.

UPDATE weekend: my boss in the Independent, headed 'The pianist doth protest too much'. I foresee some discussions when next we meet.
Posted by Jessica at 2:14 pm