What a *&%$^&(&* week. Computer virus. Blown fuses in the light circuits on the 1st floor (not that I object to candlelit baths, but you can have too much of a good thing). Proof-reading that proves, as always, endless and frightening. And Solti is having trouble with a new neighbour - a Russian Blue named Maurice (no kidding) who has moved into No.1 and is causing serious diplomatic incidents among the local felines. Imminent change of name from Solti to Scarface...

And so I have missed doing my 'full report' on Le chant at St Nazaire; I've also missed writing up two amazing concerts. First, the Razumovsky Ensemble at the Wigmore, turning their hands to Schubert's 'Death and the Maiden' Quartet and the Mendelssohn D minor Trio, to their usual roof-raising standard. And the other was the LPO's opening concert at the QEH which featured Leonidas 'chocolate fiddler' Kavakos in the most astonishing performance of the Tchaikovsky Violin Concerto that I've ever heard. Plenty of violinists play like angels, but Kavakos plays like God.

Worth mentioning, too, some breath-of-fresh-air programming from Vladimir Jurowski - the second half was Schchedrin's Carmen Suite, a Carmen-goes-to-Moscow take on Bizet, clever, funny, powerful, and a fabulous orchestral showpiece, especially for the percussion. Brilliant.
Posted by Jessica at 9:21 am

It seems my attempts to blog St Nazaire are doomed. A computer virus somehow got through our expensive security systems and has ****** Tom's system, which means broadband is down. Our amazing and glorious webmaster was here until midnight fixing the machine last night - it's now working again - but new internet system isn't, so am relying on laptop with dodgy WiFi and slow dial-up connection for access. talk about from the sublime to the ridiculous, but there we go. I guess this is one thing Pauline Viardot didn't have to deal with.

A short report about Le Chant and a gallery of photos can be found on my permasite, however.
Posted by Jessica at 8:23 am 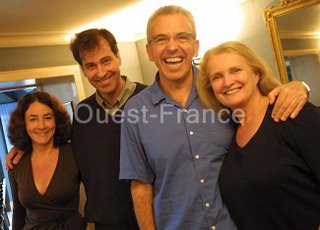 Ouest-France ran this smashing photo and a very friendly preview of the evening. Left to right, me, Philippe Graffin, Francois Le Roux and Marie-Christine Barrault.
Posted by Jessica at 9:20 am

...so much for my laptop's WiFi, which packed in on our second day in St Nazaire.

Back now, walking on air after an experience of the is-this-really-happening-will-someone-please-pinch-me-to-check variety. Briefly, 'Le chant de l'amour triomphant' raised the roof. It proved better than I'd ever hoped or expected - entirely thanks to the phenomenal team of musicians and Marie-Christine Barrault who performed it with absolute empathy.

A fuller report to follow - watch this space..
Posted by Jessica at 10:27 pm

And here it is: my first post from anywhere other than my study. Magic, this WiFi business, once you work it out.

Here we are in St Nazaire, fresh off the train from Paris and preparing for evening no.1. Paris was wet, misty, oppressive - though, of course, beautiful as only Paris can be - but here the sea air manages to be crisp and mellow at the same time. The hotel has been wonderfully refurbished since my last visit 2 years ago and now Tom is practising his Mozart quintet. Avec le mute de practice, just in case some of the other string players are within earshot...and there are a few... We arrived just too late to catch the first concert of the evening - two per day, 6pm and 8.30pm - so acquaintance with the Quince Quartet will have to wait for the moment - but the later concert includes Philippe with his regular trio, Jeremy Menuhin and Raphael Wallfisch, in Beethoven's Op.1 No.1 and to close, the Dohnanyi Piano Quintet, which I haven't heard in decades.

My third visit here - so St Nazaire feels almost a home from home. It doesn't win on the Picturesque French Seaside Town stakes, since the Brits carpet-bombed it in the war trying to get rid of the German submarine base - the great concrete hulking eyesore of which has proved indestructible to this day. But there is atmosphere nevertheless; friendliness, enthusiasm for the festival and a flock of volunteers who support the festival with transport etc.

What I'm not used to, though, is feeling nervous. 'My' concert is on Thursday and with any luck I may meet 'my' actress, Marie-Christine Barrault, in about one hour's time. There's not much I can actually do, since the script is written, has been tweaked to accommodate the songs that Francois wants to sing and has now been translated into fine French too. Will the reality remotely match my mental image of LE CHANT DE L'AMOUR TRIOMPHANT? Or have I perhaps written - er - utter claptrap? Will Philippe actually want to walk from the back of the hall up to the stage, playing the fiddle, or is this unworkable? How are they going to get the string quartet on to the platform without holding up the action too much? Will Ruth like the Viardot song I sent her last week? It's all very scary, but up to a point all I can do is leave it to its own devices now....
Posted by Jessica at 5:41 pm

Next week, more good news: the St Nazaire Festival, where my new 'literary concert' script 'The Song of Triumphant Love' is being performed for the first time on 21 September - in French. Philippe Graffin, Francois Le Roux and the actress Marie-Christine Barrault are at the heart of it and it's the 'story behind the story behind the Chausson Poeme'. St Nazaire gets a mention, we've discovered, in the immortal Jacques Tati classic 'Les vacances de Monsieur Hulot', in which a very genteel lady gazes along the French coast and remarks, "Is that St Nazaire over there?"

Yes, it is. If I can get the laptop to do WiFi stuff (technotwit-dom permitting), I'll try to report while there. If not, A BIENTOT...
Posted by Jessica at 10:08 pm

Sad news from Edinburgh. Our deepest condolences to Sir Charles Mackerras, whose daughter died of cancer a few hours before he had to conduct Beethoven's 9th.

Steven Isserlis had the last word - or note - on the 11 September Newsnight yesterday playing 'Song of the Birds' following a few words from Jeremy Paxman about how musicians are in trouble because instruments are being banned from airline cabins. Thanks to Mark Elder, everyone knows about this now. I just wish news reporters didn't seem to think it was funny. I'd like to see their faces if the equivalent happened to them when they had mortgages to pay, families to feed and contracts to honour.

Lyudmila has the latest from Leeds on who's got through to the 2nd round - yes, Tom Poster made it, as did Italian Roberto Plano (already a familiar name) and Russian-Israeli Boris Giltberg, who's recently made a very impressive debut disc for EMI.

Over in The Guardian, Marshall Marcus, the new head of music at the South Bank Centre, tells us what happened when Haydn came to London. If anyone deserves a year to himself, it's Haydn - roll on 09. Also there, Charlotte Higgins speaks out about the new 'opera' at ENO about...well, you have to see this to believe it. I haven't been to it myself, having deep-seated allergies to rap, trendiness for its oww sake and the transformation of creative culture into an extension of the news. Probably ought to, of course, so that I could speak from a perspective of educated experience, but I've got a novel to proof-read.

Last, here's my own latest operatic effort, from yesterday's Independent, for some light relief. Apparently Gounod sold the rights to Faust for 6,666 francs...
Posted by Jessica at 10:05 am

Look what Mark Elder did with his speech at the Last Night of the Proms! Good man.

Unfortunately this report also shows the total intransigence and stupidity of the Department of Transport. Looks like the UK will soon be 'Das Land ohne Musik' once more.

UPDATE: Monday morning: Mark's high-profile broadcast has certainly attracted the attention it needed. For the first time there are serious rumblings that something may, at some point, be done, when anybody can be bothered to come back to Westminster and run the country. Here' The Guardian's report on the subject.

The Independent's report is particularly good.

And The Daily Telegraph has made it the subject of a leader today too.

Next, here's what The Times says.
Posted by Jessica at 8:10 am

The Leeds International Piano Competition is underway again, and the full list of competitors can be found on its website here. With Leeds - actually, with most international piano competitions - I'm always struck by the dominance of pianists from Russia, China and, this year, Korea. But Italians have quite a history of doing well in this contest (especially ones with high cheekbones, for some reason) and there are even two British candidates for patriotic pianophiles to cheer on if so inclined. I will be interested to see how the hugely talented Tom Poster gets on.

Lack of numerous Brits in British competitions is a perennial grouch in this country, when anybody can be bothered writing about music competitions at all. But the explanation is really very simple. Pianists in Russia, China and Korea are valued highly, supported in their training by the state and taught thoroughly in a fine tradition and in a system of specialist music schools from the very beginning. Pianists in the UK, on the whole, are not. That's life.

My next novel, ALICIA'S GIFT, explores the life of a gifted young pianist growing up in Derbyshire. It's about what her talent does to her family, and what her family does to her talent. I am proof-reading it now. Writing this post is a displacement activity.
Posted by Jessica at 8:36 am

Email ThisBlogThis!Share to TwitterShare to FacebookShare to Pinterest
Labels: pianists

The Gypsy fiddler and the Norwegian footy fans... 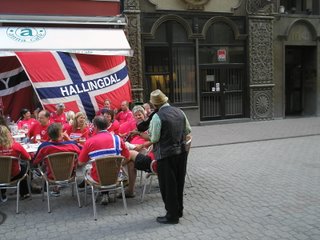 One of the many remarkable things we saw in Budapest, where Norway was playing Hungary in a football championship qualifier...

UPDATE: More pics from my Budapest trip appear on my perma-site: go to my news page and look for the link to Budapest photos near the top.
Posted by Jessica at 10:02 am 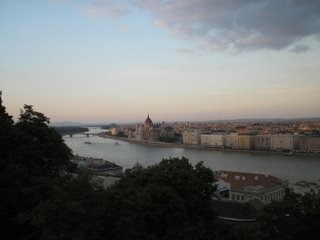 Been here, seen this...at last. I've been wanting to go to Budapest for decades. Friends who studied there would return with tales of stylistic expertise, pedagogical inspiration, extraordinary traditions, cheap music, cheaper opera tickets and excessively good cakes. Violinist friends flocked to Hungarian-born teachers living abroad (here or Canada); the great 19th-century violinists and the traditions they left behind sprang almost wholly from Hungary, including Josef Joachim and Leopold Auer and later Jelly d'Aranyi, who was Joachim's great-niece. As for Gypsy fiddling traditions, have you ever seen anything quite as astonishing as Roby Lakatos?

Now the place is an extraordinary melting pot of old and new, 19th-century Art Nouveau grandeur alongside communist-era concrete heaps, bullet-scarred, soot-covered buildings in downtown Pest contrasting with sleek, renovated, olde-worlde central Europe for tourists - but exquisite nonetheless - in Buda. Cranes everywhere. This is a city on the up, enchanting, atmospheric, disturbing, magical and irresistable. Grand yet gentle, forbidding yet vulnerable, the poetic soul of Budapest has got under my skin, and its continuity lies not least in its music.