It's a wet Sunday and - while not denigrating what I'm sure will be a fabulous Prom tonight - some of us have already seen Parsifal three times this year. So it's time for something cheery. The visually gorgeous, emotionally sophisticated production from Glyndebourne of Donizetti's Don Pasquale is just the ticket. Directed by Mariame Clément with designs by Julia Hansen, it plumps this masterpiece of bel canto tragicomedy into the heart of a world none too far from Dangerous Liaisons.

It does so by asking one vital question about the drama's essence: why is Dr Malatesta doing this? What's in it for him? Answer: he has a thing going with la bella Norina. Could it be that he's out to trick poor old Pasquale so that Norina can marry the sweet, wimpy Ernesto, be comfortably off and assure her future on the side with Malatesta, an arrangement which appears to suit both of them rather well?

Danielle de Niese stars as an irrepressible and satisfyingly complex Norina, kind-hearted yet determined, caring about Ernesto yet in sexual thrall to Malatesta. Vocally she is strong and colourful, infusing each whirl of coloratura with expressive purpose. Here, in the Independent the other week, she told me about why the bathroom scene presented a few challenges for the cinema relay...

Alessandro Corbelli is perfect as the duped Pasquale - and it is nice that he isn't left wholly in the lurch at the bittersweet conclusion. In the theatre,w hen I went there last week, Alek Schrader's Ernesto seemed beautiful in tone but a tad lacking in amplitude, while Nikolay Borchev as Malatesta proved a baritone full of suitable smoulder and streetwise assurance. Ernesto Mazzola - a glory of a bel canto conductor - creates an atmosphere satisfactorily replete with bubbles. And listen out for Kristine Blaumane's gorgeous cello solo.

It takes a lot to make a Glyndebourne audience clap a tableau upon curtain up; the all-white 18th-century chorus costumes did the trick last week. But - thought for the day here - wouldn't it be wonderful if productions that were not set in the distant past could sometimes produce the same effect? Intriguingly, I have just met and interviewed a cutting-edge opera director - more of whom very soon - who admitted to having a blind spot about bel canto. Chacun a son gout...

The opera is available to watch on the Guardian website, from which I have borrowed it, until 31 August.
Posted by Jessica at 8:57 am

Please come to the Messiaen project at Chetham's Summer School for Pianists if you're in Manchester this evening! My talk is at 5pm, my play A Walk through the End of Time is at 7pm starring Dame Harriet Walter and Guy Paul, and the complete Quartet for the End of Time will be performed by pianist Kathryn Page and friends at 8.30pm. Do say hello if you're there. Box office: 07814 989913.
Posted by Jessica at 7:31 am

Google has a Clair de lune doodle to celebrate Claude Debussy's birthday today. Somehow I have the feeling that our beloved Claude's 151st anniversaire is receiving almost more attention than his 150th. I doubt, though, that he really did ride a pennyfarthing. (We know Chausson had a bicycle, but we wish that he hadn't.)


Here's a quick birthday high-horse moment: at some stage we need to leave behind, once and for all, the notion that Debussy was "an impressionist composer". He inclined more towards symbolism: the hushed world of ideas in which nothing can ever be taken at face value, but stands as an encapsulation of something else. La Mer, for instance, is at core not about the sea... Listen to Simon Rattle conducting it: this becomes clear, for is it not rather the deeper forces of nature within ourselves that are undergoing those changes of light as time passes, the dialogue with our counterparts (wind/waves - not), and the refulgent storms in the heart and blood...

Still, attaching any -ist or -ism to Debussy is to reduce him to a fraction of his real significance. Would you do that to Flaubert, Baudelaire, Rimbaud, Zola? No fewer ideas exist within Debussy, but his language happens to be that of music...

The continual dumbing-down of Debussy - the all-too-widespread view of him as pretty impressionist, fine colourist, hot lover, etc - does not even begin to scratch the surface of his life and work, let alone his intelligence, his wide cultural references, his continual willingness to explore and experiment and move forward. His sophistication of thought, language, structure, finesse, texture, instrumentation and sheer imagination is second to none.

Meanwhile, our changing times are highlighted in fine fashion by a glimpse of this 1965 movie by Ken Russell, The Debussy Film. I doubt anyone would make a film like this now, yet there's a charm and a vividness about its vision that might just be irresistible, given half a chance. See it here: http://youtu.be/KsdAIYmSHAg.

And my top ten Debussy recordings? Difficult, but here's a selection...:

Dame Harriet Walter and Guy Paul to star in A WALK THROUGH THE END OF TIME, Friday 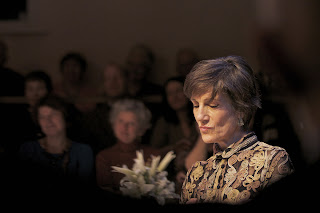 [UPDATE: PLEASE NOTE NEW BOX OFFICE NUMBER BELOW....]
A quick alert for our friends in the north... Chetham's Piano Summer School, founded and directed by Chet's tireless head of piano, Murray McLachlan, is currently in full swing. On Friday I'm heading up there with the fabulous actors Dame Harriet Walter and Guy Paul for a performance of my Messiaen play, A Walk through the End of Time. (Pictured: Harriet in A Walk at the Orange Tree Theatre, Richmond, in last year's International Wimbledon Music Festival.)

It's a big evening. We start at 5pm with me giving a talk about how and why I wrote it. The play begins at 7pm - it is about an hour long. Finally, at 8.30pm pianist Kathryn Page leads an expert team of soloists in a complete performance of Messiaen's Quartet for the End of Time.

This is going to be a hectic autumn for JD, with a number of concerts of Hungarian Dances, and a brand-new Alicia's Gift words&music programme with the terrific Viv McLean (piano). Next up: we'll be at Houben's Bookshop, 2 Church Court, Richmond-upon-Thames, to talk about it all on 3 September at 6.30pm. Please join us for a chat, drinks & crunchies. Admission is free, but we'd love it if you'd book a place: to do so, please call Yvonne on 07889 399862. More concert & play details in the sidebar...
Posted by Jessica at 8:55 am

At the risk of being a bit predictable...

There's a moment near the start of the film where he clutches his phone rather pointedly. I reckon that's when a text arrived from his press agent saying "oh no, another message from that blasted English journalist begging us for an interview in Munich/Salzburg..." (Nah, just kidding... in fact they've all been really helpful, for which I'm grateful. But 0 interview for JD yet.)

I tried. I really did. But time was there none, it seems. More about Munich and the opera festival as soon as there's a little, er, time - of which I am very short at the moment too.
Posted by Jessica at 4:23 pm


UPDATE, TUESDAY 20 AUG, 9.45am: THEY DID IT! THEY'VE MADE TARGET! A huge thank-you to all the doughty JDCMB readers who contributed both financially and by helping to spread the word.

The Orchestra of the Swan and conductor Kenneth Woods have over recent years set about recording four volumes of Hans Gál's symphonies, paired with Schumann's. The performances are terrific, with huge spirit and passion, and have been heartily well reviewed around the place. But while we were on holiday, conductor and orchestra launched a crowdfunding campaign to raise £8,500 that they need to complete the cycle. So far, they have amassed slightly over a quarter of it. They have just five days to find the rest. Please visit their Indigogo page and help them! http://www.indiegogo.com/projects/gal-schumann-symphonies/

Hans Gál is one of music's most scandalously undersung, underplayed, under-recognised good guys. I first saw his name as a child, as my dad had his admirable books on Schubert and Brahms - yet scarcely heard a note of his music until Leon McCawley recorded the piano works about ten years ago. Gál was a 20th-century individualist, working in a tonal idiom with a delightful quirkiness of soul that is often compared - with good reason - to that of Haydn.

He was enormously respected in Europe before the Second World War, but, being Jewish, was forced to flee with his young family, going first in 1933 from Mainz back to his native Vienna and later managing to move to the UK with the help of his friend Donald Francis Tovey, then professor of music at Edinburgh University; Tovey enlisted him to help catalogue the institution's new music library. Eventually Gál became professor at Edinburgh himself and lived in the city for the rest of his life.

More details about Gál, the project and what you get in return for becoming a donor, here.

Osipova & Vasiliev: How do they do that?

OK, you have 45 minutes to chat to the two most exciting ballet stars you have ever set eyes on. What are you going to ask them?

"How do you do that thing where you spin and spin and spin and then you slow it right down? Or those things in mid air where we just can't believe what we saw?" Not those precise words, perhaps, but something along those lines were uppermost in my thoughts when I went along to interview Natalia Osipova and Ivan Vasiliev, who are guest-starring here in London with the Bolshoi for one performance only on Friday. (Flames of Paris).

So, the answer? Technique, but not only technique, says Ivan: “When you put something into this technique, your spirit, you can do this. In rehearsals, you can’t. I can rehearse one thing, then go on stage and do it completely differently and absolutely more, and I don’t know how and I don’t know why. But something inside pushes me, like, ‘Come on, come on!’ And I say: ‘OK, come on...’”

The whole interview is out now in The Independent. Read it here.

The Corsaire pas de deux above shows their technical prowess off to perfection,  but it was their Giselle with the Mihailovsky Ballet a few months ago that left me in raptures - because the physical ability is matched with poetry, drama and psychological insight to the same level.

I'm just back from hols. Saw some rather good stuff in Munich. More of that soon.
Posted by Jessica at 10:21 am