We weren't planning to spill the beans about this project so soon, but it has just been shortlisted for an exciting development prize, the Fedora Award in Education, so it's time to say something.

You might remember Silver Birch, the so-called People's Opera that Roxanna Panufnik and I wrote for Garsington Opera a few years back. A People's Opera is a community project plus much more, designed to appeal to all ages, include professionals and amateurs alike and offer an artistically memorable experience to the audience as well as to the performers. Silver Birch was the one with the Iraq War, Siegfried Sassoon, the trees, the Foley Artists, 180 performers aged one to 82, the kitchen sink and the dog, and the International Opera Award education shortlist in 2018. It did well. They wanted another. This is it. 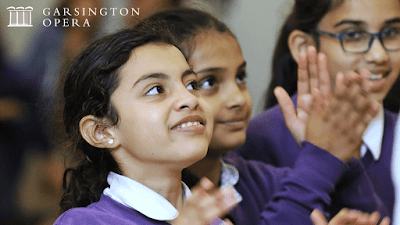 Dalia is on a similar model. It involves children, teens, adults, professionals, amateurs, the Philharmonia and quite possibly a cricket team. It is the story of a young girl from Syria who is fostered into a UK family having lost her father and brother during a terrible journey into exile. She doesn't know if her mother is alive or dead. She is determined to survive, to seize her day and to follow her dreams - of playing cricket. But there are inner and outer demons to face: trauma, flashbacks, racists, jealousies, misunderstandings and, ultimately, an impossible decision she must make. Along the way, as her life changes, so she transforms the inner worlds of those around her.

My libretto is done and Roxanna is hard at work on the score now, fired up and (to judge from my sneak peeks) writing music that, as always, goes light years beyond anything I could have imagined. The Fedora shortlist is not the first time this project has jumped ahead of our plans for it: the Amwaj Choir of Bethlehem, which has collaborated with Roxanna on elements of the music, has already recorded 'Dalia's Song' for the Bethlehem Cultural Festival.

If you've been to Garsington Opera's home at Wormsley, you may have seen the fabulous cricket pitch on location. This is not a coincidence. How can one better unite a community of diverse peoples than through sport and music together? To say I've been on a steep learning curve is probably not saying enough; I still don't entirely understand the rules, and the fond hopes that Roxanna and I had of spending last summer at a test match evidently had to bite the pandemic-induced dust. Still, I've learned enough to know that cricket doesn't have much to do with ball games.

We owe a vast debt of gratitude to all our many advisers, who include the aforementioned Amwaj Choir, our community liaison head Manas Ghanem (who is originally from Syria), the charity Refugees at Home, the BBC commentator Eleanor Oldroyd, the South African former professional cricketer Mo Sattar, and the former refugee, now bestselling author and motivational speaker, Gulwali Passerlay, whose book The Lightless Sky has been a major inspiration. The production reunites us with our fabulous director Karen Gillingham, conductor Dougie Boyd, 'magic singing woman' Suzi Zumpe, our dear friends at Garsington and hopefully even some of the same young people as Silver Birch, plus several years' worth of new Youth Company recruits.

One more credit: my late mother-in-law, Gisela Eisner. Her history inspired Dalia's. She was a Jewish refugee from Nazi Germany at the same age as our Dalia. She was put onto the Kindertransport to London aged 12, said goodbye to her parents and brother at the station in Berlin and never saw them again: all three were murdered in concentration camps. She was fostered by a Quaker family in Wolverhampton, where she found her feet and her means of integration by learning to play netball. Originally I longed to tell her story, but in collaboration with the whole team we decided we needed a present-day setting. The equivalent was all too easy to find. The difference is that shamefully the UK does not have anything remotely resembling the Kindertransport to rescue children from Syria.

On the Fedora shortlist, Dalia is the UK project among ten from countries all over Europe. One of the prizes is given through public vote, so if anyone felt like logging in and lending us your click, we would be very happy indeed. Thank you for your support! https://www.fedora-platform.com/discover/shortlist/dalia-a-community-opera/356

Dalia is planned for premiere in summer 2022. We profoundly hope that the pandemic will be firmly in the past by then.