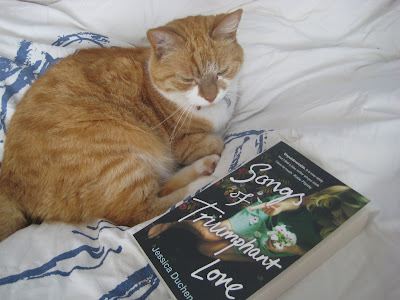 The now-obligatory picture of One's New Book Together With One's Cat. (I rather love the front cover, although if you've read Hungarian Dances you will guess, correctly, that the novel is less flowery than the image.)
Posted by Jessica at 11:46 am

RSS for the new site: please stay logged to JDCMB for now...

Hi all, I'm back. Well, not quite. The site at Standpoint magazine is still being fine-tuned and as yet there's no direct RSS feed for my blog. I have no idea how such things work, but a brief bit of market research via Facebook suggests that you really, really need this, so until they get one up and running there, I will continue to post links here so that at least you'll know the thing exists and you can click straight through to it.

I now have a column in the magazine itself, starting from the July issue, which is out now. I am standing in for their usual columnist, Ian Bostridge. First article is about HAYDN! Read it here.

Here are my blog posts so far:

Mastersingers - from Cardiff to Cohen (on what some of the candidates at the BBC Cardiff Singer of the World Competition could learn from Leonard Cohen).

There's nothing like a piano-playing Dame (Arise, Dame Mitsuko!).

Chopin as Prophet - Mikhail Rudy's stage version of The Pianist, in Manchester's Royal Exchange Theatre, blows off my socks.

Tribute to a Contemporary Genius - a somewhat ironic heading for a post about what the heck was so great about Michael Jackson?!

Please leave comments on the Standpoint site rather than this one! They are moderated in house, but do appear sooner or later as long as they're not libellous, racist or gratuitously personally insulting.

JDCMB is moving to STANDPOINT

WE ARE MOVING HOME!

After 5 happy years at Blogger, where I've been enjoying adjusting seasonal colours and encountering self-reliant-technotwit-dom on a regular basis, I am taking my blog to the new website of STANDPOINT Magazine.

STANDPOINT, which launched in May last year, is an upmarket, intellectual current affairs monthly with a global approach. I will have a monthly music column in the magazine itself, starting from the July issue, where I'm stepping into Ian Bostridge's shoes (!). And I'll be blogging alongside people like legal eagle Joshua Rozenberg and STANDPOINT's editor Daniel Johnson (who covered the fall of the Berlin Wall for the Daily Telegraph), so I suppose I'll have to be on best behaviour for a while. My first two blog posts are up already; the design is being fine-tuned even as I write now; and very soon it should be business as usual.

They have promised me that I can continue JDCMB exactly as before. I only hope they know what they're letting themselves in for.

JDCMB will continue to be visible here on Blogspot so that the archives are readable and the links followable - I won't have the same sidebar space at STANDPOINT. Please feel free to come back and explore whenever you like.

See you there soon!
Posted by Jessica at 1:49 pm


I'm off to France with Tom. Here's something suitable to mark the occasion.

One who got away, and TWO who didn't

Mariangela Vacatello, who won the audience prize at the Cliburn, playing Stravinsky in an early round. The 27-year-old Italian studied at Imola and is a great favourite back home. Here in Britain we can hear her at the Chichester Festival Theatre on 10 July and the Buxton Festival on 13 July. Her semifinal video is a gorgeous performance of the Scriabin Etude for the Left Hand.

Now here's winner Haocheng Zhang in what sounds to me like a jolly impressive Scarbo.

And - after a bit of to-ing and fro-ing involving a mysteriously missing video on Youtube - thanks to Michael Monroe for sending me a link that actually works so we can show Nobuyuji Tsujii playing some of the Hammerklavier:

UPDATE: 5.30pm, Thursday - whatever you thought of the Facts & Arts piece, try this one for nastiness: Benjamin Ivry in The Wall Street Journal, under the title WHAT WAS THE VAN CLIBURN JURY THINKING? I find some of his arguments exceedingly odd - and the Takacs Quartet has not come 'from Hungary' for donkey's years and is in fact half English.

I should warn you quickly, if you are wanting to comment further on any of this, that as of tomorrow afternoon I am OFF until the end of next Thursday and have no intention of straying further from the swimming pool behind our favourite Luberon bed & breakfast than I absolutely have to - and it's in a spot deliciously remote from WiFi. So speak now or temporarily hold your peace!
Posted by Jessica at 1:21 pm

For the first time the Van Cliburn Competition has been won by three Asian candidates: two very young winners sharing the top prize and no 'crystal' (third) prize being awarded. One of the top two was a blind Japanese boy whom some have been calling the 'Susan Boyle' of the piano: Nobuyuki Tsujii, 20, who has been blind since birth. The other, Haocheng Zhang from China, turned 19 during the contest.

Here's a report from Michael Johnson from Facts & Arts, putting most of the situation into a nutshell and including the delicately-expressed information that some of the jurors appear to have voted for their own students, that the contest finished on a 'sour' note, that some felt there was a bias against Russian candidates and that the audience mobbed the Italian finalist Mariangela Vacatello and thought she'd been short-changed. [The Facts & Arts article also alleges that Tsujii is 'mentally handicapped' as well as blind, but as you'll see from the comments this detail is disputed and I am unable to confirm either way, though have found no other references to this condition as yet.]

I dread to think what the music business machine will decide to do with 'Nobu'.

See further updates above!
Posted by Jessica at 8:00 am

Yeats for a very sorry morning in Europe

TURNING and turning in the widening gyre
The falcon cannot hear the falconer;
Things fall apart; the centre cannot hold;
Mere anarchy is loosed upon the world,
The blood-dimmed tide is loosed, and everywhere
The ceremony of innocence is drowned;
The best lack all conviction, while the worst
Are full of passionate intensity.

Surely some revelation is at hand;
Surely the Second Coming is at hand.
The Second Coming! Hardly are those words out
When a vast image out of Spiritus Mundi
Troubles my sight: somewhere in sands of the desert
A shape with lion body and the head of a man,
A gaze blank and pitiless as the sun,
Is moving its slow thighs, while all about it
Reel shadows of the indignant desert birds.
The darkness drops again; but now I know
That twenty centuries of stony sleep
Were vexed to nightmare by a rocking cradle,
And what rough beast, its hour come round at last,
Slouches towards Bethlehem to be born?


I'm convinced that our Hungarian friend who took the Barbican by storm last night could play the socks, never mind the red leather trousers, off Znaider, Bell and Mutter combined. There's an image to get the imaginations working...

Sporting those trousers and a diamante-buckled belt, as if the trademark tache wasn't enough to let us know who he was, Roby Lakatos brought on his band, including some very young and phenomenally talented performers, just in front of the LSO. He played the first half unamplified, but what a massive sound he produces - vast and round and as rich as Hungarian venison stew with lashings of goose liver. (The pic is courtesy of the LSO, taken during the rehearsal - no trousers, at least not those ones...)

His cimbalom player, Jeno Lisztes, played his almost-namesake's Hungarian Rhapsody No.21 solo - the damn thing is hard enough when you use 10 fingers, but the cimbalom is rather like playing with two only, and with the notes in odd locations. The roof nearly blew off. One day I will have to share with you an account by Arthur Hartmann of the time Debussy tried to learn the cimbalom. It's priceless. Soon, I promise.

With the programme a mixed bag of lavish Gypsy virtuosity, a couple of solo spots for the orchestra (Strauss Zigeunerbaron Overture and Kodaly Dances of Galanta, well chosen and delicious), a few marvellous jazzy episodes rather a la Hot Club de Budapest, some unutterably incredible fiddle playing and a bit of commercial schlock (Fiddler on the Roof just didn't do it for me in this context, though I love the music), I anticipated an interesting mesh between the Hungarians and the LSO.

Much was more mush than mesh, though. The balance never worked when band & orchestra played together, even when Lakatos & co put on mics in the 2nd half, and I wonder if the very young conductor, Eva Ollikainen, could not perhaps have asked the orchestra to play a tad more quietly now and then. Most people I talked to were great LSO fans yet still wished the orchestra would just go home and give the floor to their guests, full stop.

But full marks of a different kind to the LSO's Maltese leader Carmine Lauri, whom Lakatos took centre stage to share the work that he dubbed, with extreme Hungarian charm, "CsardasMonti" as a duet. Dazzling stuff.

A lot of violinists in the audience were fanning themselves quite hard in the interval with their programmes. Can't blame them - it was a hot night for fiddlers. I hope my programme notes made sense...wrote them while really quite ill...and it is terrifying to walk into a hall and see the editor of Songlines reading your words (he is a Hungarian music expert, to put it mildly). Not sure, what became of the Leo Weiner Divertimento, which either didn't happen or didn't do so in remotely the way I'd anticipated. Suspect the latter.

With encore after encore, a third reprise of Hejre Kati ended the evening after a stunning, exhilarating and rather exhausting three hours. As one friend remarked, I think we all knew exactly what must have happened to Kati by then.
Posted by Jessica at 5:12 pm

Lakatos is in town tonight!...

...with the London Symphony Orchestra at the Barbican...and I've done their programme notes. Fun! :-) This also means that I finally get to see the guy play live, at long long last.

A bunch of friends are very excited about this too - how else do you get half the violinists of another orchestra to turn up to a concert on their night off? But I also have friends who dislike the commercial turn that Lakatos & co have taken. It depends how purist you want to be. I tend to think that sensational playing is sensational playing, and wonder how the orchestra will keep up with the guys in pieces like this: Cosma's music for Le grand blond (an otherwise forgettable thriller that happens to have a great score). Will report back tomorrow...