In Portrait: Beethoven, from dignity to madness...

If you are already a subscriber to IMMORTAL, you'll have received this in your in-box. Still, it seems to have gone over quite well, so I am reproducing it for those who haven't got it yet. There's still time to sign up as a patron of the book, here [ahem]. Thanks! x 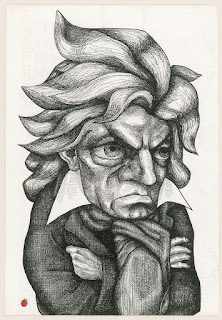 If you're not yet familiar with the website of the Beethovenhaus Bonn, do please take a look at it. This museum and research centre at the composer's birthplace is the world centre for work on him, and their digital library is a treasure trove, available to view wherever you may be. During the writing of IMMORTAL I have spent innumerable hours online, browsing their collection of letters, images and more. Today I'd like to draw your attention to the section on portraits of Beethoven - and the contrast between those created while he was alive, and others imagined after his death. (Above: a caricature of Beethoven drawn by Anne Marie Steen Petersen, from a BRF record sleeve, viewable in the Beethovenhaus online collection.)

Look at the paintings and etchings of Beethoven as a young man from 1801 to 1806, even as a middle-aged-ish one around 1814. He looks...I don't want to say "normal", because you can detect in these images a certain bearing in his posture, a strength of character in his eyes, a person with what we'd possibly term "attitude". But certainly more "normal" than, say, the drawing above.
Was this man arrogant, aware of his own gifts, more intelligent, focused, hardworking and hot-tempered than most of those who came within his daily orbit? Perhaps: but he was, as an individual, quite believable. Then look what happens later. In the famous portrait in which he holds the manuscript of the Missa Solemnis, the cheekbones are elegant, but the scowl is strengthening; a drawing of him full-length shows him stocky and short-legged, almost a caricature. These pictures were all created before his death in 1827.
Now turn to the next section: depictions after 1827. At first they are honest, scowly, but with that distinguished bearing of confidence and assurance - an inner dignity despite all. Then they begin to change. They become more scowly still, and less controlled. The eyes seem to pop or to lower out from under heavy, gloomy brows; the stance has lost its uprightness. The attitudes begin to be wild. The artists seem to think they are depicting someone eccentric, even ghoulish. Some look downright mad.
They are, perhaps, showing Beethoven as people started to think of him as the years went by and whispers were transforming the composer posthumously from strong yet troubled soul to profound nutcase. Everything becomes exaggerated, Gothic, fit for legend, but little else. It makes headlines and encourages gossip if Beethoven is considered crazy or violent. Posterity had begun to strip him of his dignity and intellectual strength - qualities that simply shine out of those early, actual portraits.
I've seen descriptions of him as "physically ugly" time and again. But those Young Beethoven images - why? Physically ugly? No: he is strong, characterful and full of charisma. Besides, the attraction of a male musical star has never depended upon classic good looks (I've not noticed Hollywood-style matinée idols among the Beatles or the Rolling Stones or any recent pop singers, for instance...). Just because he was short and dark, that is no reason that Josephine or Julie or any other female would have failed to be magnetised by him.
Researching the 19th-century opera singer Pauline Viardot for a words&music project some years ago, I was struck by exactly the same thing: writers kept on describing her as ugly. Even today, some articles still have to harp on the idea that she was ugly. But did that matter to the writer Ivan Turgenev, who was passionately in love with her for most of his adult life? Did it hell. It is commentators, not the people themselves, who appear to believe that only a physical beauty that matches classic preconceptions (ie, tall, slender, smiley and probably blonde) can account for attraction; and some have even been known to argue that an appearance considered less than perfect must discount certain candidates from probability when we look back at their relationships.
The passage of the years builds up layer upon layer of false "tradition", sensationalised impressions, a distortion of reality. You can sometimes hear it in music too: take the way that the historically informed performance movement has stripped away layers of false tradition in Beethoven, whose symphonies, for instance, had somehow grown heavier and slower and more and more portentous until the mid 20th century. By the 1970s, enough was enough and a whole generation of musical researchers set about returning to original sources, intending to divine the truth of the composer's intentions and the way instruments would have been played in his day. The effects were transformative and have changed, probably forever, the way we listen to his music.
Yet now, decades on, this approach too is building up its own layers of false tradition and imposing certain mannerisms for reasons that are never adequately explained. For example, one sometimes encounters performances in which phrases that drive forward suddenly fade out towards their end. Why? I've never seen any justification for it, in any score or treatise. Just as playing slowly and portentously used to be, mannerisms of this type are now handed down from generation to generation... Musicologists of the 2050s are going to have some fun unravelling it all.
Anyway - I shall shut up about that now and get back to work. The book is now in the hands of its editor and I am expecting to see the results from her in about a month's time. This is nerve-wracking. I know it's too long. I also know that whatever you are expecting from it, you will probably find it is something different and I hope you're not too startled.
Posted by Jessica at 9:15 am

For Valentine's Day in #Beethoven250 year I've written a chunky piece about the Immortal Beloved for Universal's Udiscovermusic classical section. Here's a sample...


After Ludwig van Beethoven’s death on 26 March 1827, his sometime secretary Anton Schindler and two close friends combed through the composer’s last apartment, hunting for some bank bonds he had bequeathed to his nephew. They found more than they had bargained for. In a small drawer, they discovered the Heiligenstadt Testament, in which Beethoven had described his devastating battle with deafness in 1802; and with it, an apparently unsent love letter, addressed only to a woman he terms his ‘Immortal Beloved’...

...So well did Beethoven protect the identity of his Immortal Beloved that musicologists spent around 200 years trying to find out who she was. It is still disputed today.


Something else vital was missing from the letter: a date. Beethoven wrote on it only ‘July 6’. No year. Through matching days of the week with the date, possible years were narrowed down to a shortlist and watermark identification finally settled upon 1812. From that flowed several possibilities...
Antonie Brentano? Julie ("Giulietta") Guicciardi? Bettina Brentano? Therese Brunsvik von Korompa? Or her sister Josephine?


Immortal, meanwhile, is with editorial, so I'm biting my nails a bit; not many people have read it and I am too close to it to have much sense of how it will really go over. Happily, I now know it is to have the same editor as Ghost Variations, who was fantastic, and I'm looking forward to polishing it up into final form in the months ahead. (More details about it here...)
Posted by Jessica at 3:37 pm

A CD by the young Belgian pianist Julien Libeer has just crossed my desk, so I looked him up online.  He's part of a new generation of intelligent and engaged young musicians trying to steer their way through the shark oceans of the music industry, considering where art belongs in the 21st century and in the development of us all as human beings. As part of that he has set up a Youtube channel in which he and guests discuss these matters.

It's called Glass Bead Game Talks, after the book by Hermann Hesse in which these issues were paramount (if somewhat different - I don't think Hesse had to contend with why a disc of classic violin concertos by the violinist Nathan Milstein should be rereleased sporting a sales-friendly photo of an arty nude). The crucial thing, though, is not that Libeer is trying to provide answers - he isn't; it is that he recognises we need to think about things in depth if we're going to justify devoting ourselves to this art - even if that justification is only to ourselves - and creating a community and talking is the best way to spark ideas.

Libeer was a protegé of Maria João Pires, among other mentors, and besides his concert activities he has set up a project in Molenbeek to bring singing to schoolchildren. I thought I'd give him a quick plug here because he is a fine musician and deserves it.
Posted by Jessica at 9:04 am