Why THE REST IS NOISE festival will change concert-going forever

The second part of the Southbank Centre's year-long celebration of the music of the 20th century kicked off on Saturday. And as it did so, the venue released figures that prove beyond reasonable doubt that this extraordinary festival, The Rest is Noise, has not only been succeeding in attracting new audiences, but doing so as if there is a tomorrow after all.

In short, three-quarters of people booking for these concerts  had not bought tickets for a contemporary classical event at the Southbank before. The place has sold more than three times as many tickets for contemporary classical music during the festival than they did in 2012. About 39 per cent [update] of those booking for concerts had not been to any classical concert at the centre before, and one in three people booking the whole-weekend tickets had never been to the Southbank Centre before at all.

The wake-up call is so loud that The Rest is Noise amounts to a virtual thump on the head for the musical world - or, indeed, a kick on the backside. We can't afford to ignore such numbers. And that's why programming may never be the same again.

There's been a buzz around The Rest is Noise unlike anything I've encountered within these hallowed (?) portals in 40 years. The RFH was bursting at the seams for Britten's Peter Grimes on Saturday night, but the ferment of activity in the surrounding weekends of events - like this one devoted to the Britten centenary, including films, talks, more concerts (Noye's Fludde notably), 'bite' events (15-min talks on different yet related topics) - also feels more like the Edinburgh Fringe or Hay-on-Wye than a stuffy old arts centre. Hopefully those last four words are ones we'll never have to see together henceforth.

I had a chat with Jude Kelly (artistic director of Southbank Centre) and Gillian Moore (head of music) about what they've been trying to do with The Rest is Noise, and why. You may remember that a few years ago Daniel Barenboim did the complete Beethoven sonatas cycle at the RFH in two weeks. At the time, I wrote this article, declaring that the runaway success of the series proved that what really draws audiences in is anything but dumbing down: instead, we long for the big, immersive, profound experience, where you give a lot and reap more than you sow. It turns out that this wasn't a coincidence.

"When I first came in as artistic director, the first thing that happened in classical music was that an agent said Barenboim was going to do the Beethoven sonatas over a year," Kelly says. "I said: no, let’s do it over a fortnight. They thought that was too much to offer; I said no, that’s what we want to do. And it was a huge success. That gave me the courage to think that these big ideas are what we should be championing."

Gillian Moore adds: "The idea of programming 20th-century music boldly and constantly is for me so strong – I’ve always tried to do that. But this is a very big idea that really can help us achieve it. Linking with Alex Ross’s book, we’re not slavishly following it, but using its atmosphere as a stimulus. It’s all about putting music in its cultural context of history, science, what was happening, what people were thinking, at the time."

She continues: "Music is not isolated from the world of ideas. Sometimes in classical music we can behave as if it’s its own thing, going along on tram tracks without relating to intellectual ideas. But talk to any composer about politics or life sciences and it absolutely does. So to appeal to people who are culturally curious, but who might think classical music is not for them, especially 20th-century classical music, we are talking about more of our music being linked to broader cultural questions."

(This relates to another of my own old bug-bears - about the isolation of musical biographies in bookshops, tucked far away from the general biography section which might feature writers, artists, philosophers and actors, among others. That's where musical creators and performers belong, too. Nowadays, of course, you're lucky if you can even find a bookshop.)

Kelly, who has been artistic director of the centre since 2006, says she is often struck by how many extremely well-educated people, interested in theatre, politics, economics, history, science and more, tell her that they never attend concerts of classical music. "But all of that makes up music - so let’s contextualise the whole thing," she says. If you only want to listen to the music, that's fine, of course; but now there has to be a further option as well.

"I can't speak for other places, but for Southbank it provokes the question that doing a single concert with no other information around it other than programme notes isn’t a proper offer," she says, when I ask what the implications are for future programming. "If any of the orchestras want to do that, it means their assumption is that the audience is already familiar with the repertoire or are certainly very comfortable with classical music.

"My passion is about how you reach lots of other people who aren’t familiar and aren't comfortable. Obviously just playing the concert in itself hasn’t been doing that. I’m very committed to extending this idea of the wide open school, the offer to do music studies and history studies and science studies all in one go - and making the live performance of music and contemporary dance and contemporary art a central way of understanding  how our societies work."

Having had no thorough academic musical education at college level, she adds that when she wanted to fill in the gaps, the solution she was looking for simply didn't seem to exist: "a course on how you learn and understand the history of classical music". This education is what's been lacking; this is why so many people, when you tell them you're involved with classical music, look afraid and say at once, "I don't know much about classical music". That absence of knowledge intimidates them and, instead of proving an attraction to learn something, it keeps them away. 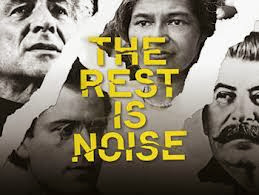 "I’m interested in the fact that people are excited by the complexity of science and the complexity of ecosystems, but classical music, which is a version of all of that, stays away from them," Kelly says. "We’ve partly got ourselves to blame - the art industry has often spoken in language that suggests this is for people with fine feelings or that you have to go on some sort of escalator before you can get there and people don’t know what the starting point is."

"I think we’ve got to be much more welcoming and much less judgemental," Kelly adds. "I think we can seem judgemental about people who don’t know much about classical music. We should say, 'Great, if you don’t know anything about it then you won’t have any prejudices...'" The Rest is Noise website is a huge bonus where this is concerned, preserving many of the talks, "bites", etc, on demand. Visit the Explore section here.

The bonanza of this festival, which includes study evenings, "breakfast with..." sessions exploring the technical workings of music, screenings of films, events for children, and countless other elements, may not be easy to replicate elsewhere - though I'm sure that this is just the beginning for the Southbank. Still, the thinking, and the resulting sales, carry a few big, strong simple messages for all. It's about having courage to think big and to lead from the front. "The big lesson for me is about the scale of an idea," says Moore. "Sometimes you have to do something really big and bold for it to cut through."

The full programme for the rest of the Rest is here. And now we've reached the point where many of the composers are alive and some of them are kicking. We can certainly expect to see Philip Glass, Steve Reich and Sofia Gubaidulina in London in person for good chunks of the next part.

What of the future? Don't dismiss this event as a one-off. What's become clear is that the rest is just not noisy enough.