Finding our roots: a guest post by Rebeca Omordia

In solidarity with BLM, I'm handing the floor to the pianist Rebeca Omordia to tell us the hows and whys of her African concert series, which goes online later this month. Her CD of music by Nigerian composers was proof that we need to hear a great deal more of them!
You can also watch a preview of the series on the African Concert Series Facebook page, here.
Over to you, Rebeca...
jd 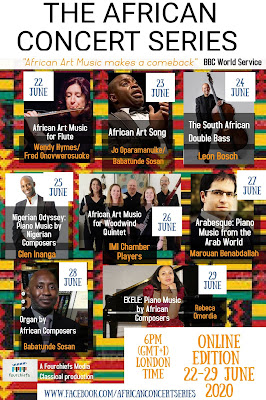 Africa is very colourful - each country in Africa has a multitude of ethnic groups and each ethnic group has a music of its own, with characteristic melodies and rhythms -, quality which I have tried to emphasise in the programmes of The African Concert Series, through individually themed concerts: Nigerian Odyssey, The South African Double Bass, String Quartets by African Composers, Arabesque: Piano music from the Arabworld, and many more.

After the success of the 2019 series, I had hoped for other performances in 2020 but the Coronavirus pandemic forced us all into our homes. The 2020 online series is not a resignation, an acceptance of “The New Normal”, we are not bending our heads down and pretend we still have jobs as performers; it is the continuation of our pioneering work, of taking the message forward despite circumstances. During the current social and racial climate, I believe returning to one's roots is the best form of self-care and I truly hope it inspires others to research their origins and explore their heritage.
The online series features one week of very short performances, especially recorded for this programme, streamed daily on The African Concert Series Facebook page starting on 22 June that will reveal music never heard before by the social media audience, giving us the opportunity to reach a wider audience.

African classical music, known as African Art music, emerged in West Africa in the 20th century and its founding father is Nigerian composer Fela Sowande (l905-1987). Most of the African composers studied in Europe then returned to their African countries where they began broadcasting and lecturing in universities. Eventually, Music Societies were formed (e.g. MUSON – Musical Society of Nigeria founded in 1983) allowing for classical concerts to be performed. All composers wrote music in a Western classical style while using African traditional melodies and rhythms. Composers from Ethiopia, South Africa, the Arab world – Morocco, Algeria, developed their own style of art music.

The African Concert Series 2020 - online edition opens on 22 June with multi-award winner St Louis (USA) based Nigerian-Ghanaian composer and pianist Fred Onovwerosuoke and his wife flautist Wendy Hymes. FredO, as friends call him, became internationally renowned when his chant Bolingo was featured as a soundtrack in Robert de Niro's film The Good Shepherd. FredO wrote music for many instruments including the flute, music featured on The African Art Music for Flutealbum released by Wendy in 2008.
The second performance in the series is by Nigeria’s leading tenor Jo Oparamanuike, accompanied by Babatunde Sosan, the third in his family to be organist at Christ Church, Lagos, who will stream from Nigeria. South African virtuoso bass player Leon Bosch will play music featured on his new Meridian Records CD The South African Double Bass– music composed especially for him. Nigerian pianist Glen Inanga, founder of the first ever Arts Festival in the Cayman Islands, will perform music from Nigeria. Moroccan-Hungarian pianist Marouan Benabdallah has been touring the world to great acclaim with his programme Arabesque: Piano music from the Arab world, project which lead to the discovery of 90 composers from countries such as Morocco, Algeria, Tunisia, Egypt, Lebanon and Syria.
I will close the series on 29 June with a selection from 24 Studies in African Rhythms by Fred Onovwerosuoke. FredO travelled the whole Africa where he gathered material that he used in his 24 Studies in African Rhythms, each study is inspired by a song or a dance from a different country in Africa.
Rebeca Omordia
Posted by Jessica at 10:03 am