As if Pieter Wispelwey doubling up as the British PM wasn't enough, a trip to the cinema last night revealed that Philippe Graffin may have a new job too, playing moody Jane Austen anti-heroes...unless Matthew Macfadyen has taken up the violin.............
Posted by Jessica at 9:39 am Links to this post

The nice surprise I mentioned

After - how many?! oh no!! - decades of living in London and attending its various flawed concert halls, I had a huge surprise the other day. Tom's orchestra, the London Philharmonic, is (like its sister Philharmonia) currently homeless while the Royal Festival Hall undergoes its long-awaited refurbishment. So they're playing next door at the Queen Elizabeth Hall instead. Normally I loathe the QEH. It's a miserable concrete monstrosity and its gloomy interior induces little other than sleepy ennuie.....well, until now. What happened? They've opened up the platform so that it's far deeper than usual; they've put up some wooden acoustic stuff (looks a little like stacked up coffins) to the back and sides and - bingo! The band and Vassily Sinaisky started up some lovely Glinka and there was the sound we'd always wanted. Resonant. Warm. Clear. Close. Wallow-in-able. Glorious. Right there in our very own QEH. I was speechless.

Great concert too - another first was hearing Tchaikovsky's Third Symphony live in a concert hall. A work I've always loved from recordings but one that never normally gets played, except for the New York City Ballet performing Balanchine's 'Jewels'. Tchaikovsky in a good mood is such a rarity that it's surprising nobody makes the most of it when it happens, as it undoubtedly does here. The nickname 'Polish' makes me laugh, though, because - except for the Polonaise in the last movement - this music is so terrifically, unmistakeably Russian...

The evening was only marred a little by the Dvorak Cello Concerto, played passably - I use this word with reason, as you'll see in a mo - by the LPO's quasi-resident soloist, Pieter Wispelwey. He's a handsome Dutch fellow (peculiarly resembling a leading British politician) who is very good at Bach in period style. No reason, I guess, why he should have a grander concept of the Dvorak, given that his natural bent is clearly not for romanticism. But hear that famous recording of Slava playing his guts out, and one wonders why anything less would ever do. Playing aside, Wispelwey's facial expressions - ranging from apparent surprise to intense frustration to incipient apoplexy - conjured up for me startlingly marvellous images of Tony Blair in need of prunes.

UPDATE: SUNDAY MORNING - Here's Anna Picard's review of the concert from The Independent - she has less time than me for the QEH acoustics, and more for Wispelwey's playing, but her impression of his face is even more extreme than mine...!
Posted by Jessica at 2:13 pm Links to this post

After a day or two of quiet gloating over being Blog of the Week, it struck me that I'd better get blogging again! So no more resting on the laurels. We went to the ballet last night and this is as good a place as any to resume.

The Royal Ballet at Covent Garden has startled me by programming not one but two ballets to Faure this season. I had to go and see at least one of them (I may give the Requiem ballet a miss, as that piece makes me cry, not an advantage if you're trying to watch a ballet). Last night's triple bill opened with 'La fete etrange', which, I'm reliably informed, the company nicknames 'Strange Feet'. The very slight story is based - very slightly - on part of Le Grand Meulnes by Alain-Fournier - one of my all-time favourite books - and Faure is the perfect choice to accompany it. Darcey Bussell danced the leading role of the ultimately abandoned Bride. She is incredibly wonderful to watch, with such openness and lyricism in her long limbs that she radiates light by simply walking on stage. The choreography has its moments, but on the whole wasn't particularly memorable; as for the music, seven piano pieces and two songs by Monsieur Gabriel, orchestrated by Lennox Berkeley - well, all I can say is there's a reason why Faure used a piano. Disappointing over all - yet Darcey Bussell's performance was the best part of the evening.

Second up was Pierrot Lunaire - a Glen Tetley masterpiece, danced for a long time by Rambert but currently in the Royal's repertoire for the first time. This choreography is absolutely stunning and a humungous tour de force for the dancers, especially Pierrot (in this case the gorgeous Federico Bonelli). The ensemble in the pit managed the score superbly, which was a relief since the Faure had sounded dreadful. But even today most people in the audience absolutely can't stand this music. That also goes for professional violinists being dragged along by their balletomane wives. It's phenomenal to think that Schoenberg's Pierrot Lunaire will soon be a hundred years old. Nobody has ever LIKED it. Nobody is EVER GOING to LIKE it. However much we admire it, however much we're forced to study it at school, however 'important' it's supposed to be - was it really? was it not rather a path into an unusually blind alley? is it not desperately dated today? - the miserable fact remains: this stuff SOUNDS ghastly. Bluster away, ye purists: it's true. There were people in Covent Garden last night who walked out, despite the astonishing things that were taking place on stage.

And finally to Marguerite and Armand - the Frederick Ashton classic created for Fonteyn and Nureyev and not revived after their demise for many years, since it was deemed that nobody else could carry it off. Last night we saw Sylvie Guillem and an Italian hunk - excellent dancers, yet the Italian lacked all sense of charisma and Guillem lacked all sense of tenderness. As the ballet depends heavily on both - a lot of it consists, to put it bluntly, of snogging - this was a major disappointment. The Liszt B minor Sonata, transformed into a concerto and slowed down to accommodate dancers' needs, has also heard better days, though it's incredible to see the way the story fits it so perfectly - there's even a built-in cough motif. Guillem's fan club was out in force, but in the Bussell - Guillem rivalry stakes, Tom and I back Darcey all the way. She moved me more in the insubstantial role she took in La Fete Etrange than Guillem did at any point in the wildly dramatic Marguerite.

A rare surprise, however: Anthony Dowell put in an appearance as Armand's father. Dowell was my great pin-up when I was 13. Seriously, when I had a ticket to see him dance I used to count the days until the show! I lived from performance to performance (tickets were a lot cheaper then, incidentally) and the agony was only relieved when I found a musician whose concerts provided the same thrill and the same need to count days - KZ, of course. I'd never expected to see the glorious Sir Anthony on that stage again, as we are none of us as young as we used to be, and this therefore brought a gentle lump to the throat.

Another nice surprise the previous night at the LPO's first gig at the Queen Elizabeth Hall...but more of that another time.
Posted by Jessica at 9:10 am Links to this post 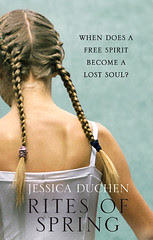 This is the front cover of RITES OF SPRING. It's up on Amazon now, so seems I can let you see it at last!

Posted by Jessica at 8:26 am Links to this post