I've just discovered that Brendan G Carroll's definitive biography of Korngold, The Last Prodigy, is out of print. As next year is the 50th anniversary of EWK's death and there is going to be A LOT going on to mark the occasion, it seems completely ridiculous that this book, which took Brendan 25 years to write, should be unavailable. It's an invaluable and irreplaceable resource. The Korngold website, run from Athens by another devoted Korngold fan, Eleftherios Neroulias, is carrying an online petition to the publisher, Amadeus Press, begging for the reprint of the book. You can read and sign the petition here.

My own rather more modest book still seems to be in print, but it's no substitute and I am the first to admit that.
Posted by Jessica at 4:20 pm

The wonderful Russian pianist Nina Milkina died last week at the age of 87. I was lucky enough to meet her a few years ago for an interview about her long and fascinating career, and was much struck by her combination of qualities: humour with passion, intelligence with intuitiveness, delicacy with real gumption. She hadn't been at the forefront of musical life for a while, but her recordings are exquisite, displaying a rare sense of magic and nuance in such worlds as Mozart and Scarlatti as well as Chopin et al. This recording, live from the Wigmore Hall, is a treasure: contact details of how to get it are included on the musicwebinternational page. She was a much-loved figure among the younger generation of pianists here in London, where she lived; Leon McCawley (who introduced me to her) in particular cites her as an inspiration and mentor, not least in his impressive new set of the Mozart piano sonatas. She will be sorely missed. I wrote an obituary of her which was published yesterday and can be read in my archive, here.
Posted by Jessica at 8:11 am 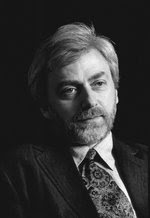 Krystian Zimerman notches up half a century today. When I was 14, I went with my parents to hear him play at the Royal Festival Hall. He was 23 and I'd never heard anything like it. There was a world in his piano that rolled together everything that was finest about art, poetry and pure, white-hot energy. He played the Brahms F minor Sonata Op.5, the Chopin First Ballade and the 'Funeral March' Sonata. Nothing was ever the same again. Ten years later, I had a job on a music magazine and I suddenly realised that all I needed to do was sell him to an editor, call up his manager and fix an interview, and then I could ask him all the questions I wanted to about what made that musicianship tick.

That was quite a while ago, but to this day, this man gives me faith in human nature, because he is as special a person as he is a pianist. The finest musicians play as they are; listening to the playing, you listen to them speak. You can hear their essence, distilled, in their music-making. Krystian is no exception. Few pianists have this degree of sensitivity, tenderness, intelligence and visionary wisdom, and few people.

Here's his page at Deutsche Grammophon: follow the link to the discography...

Happy birthday, Krystian! Have fun!
Posted by Jessica at 7:58 am

Good news before I get onto tonight's pseudoprofundities: the other day, I received a letter saying I've got a grant from the Authors' Foundation to help me write my next book! Would have opened champagne if I hadn't had food poisoning at the time.

Not sure whether that gliterati party really did try to murder a roomful of authors, agents and publishers with radioactive sushi the other day, but what's certain is that it's taken me the whole weekend to get back to normal and I missed a lunchtime recital by Philippe Graffin this morning in Norden Farm, Maidenhead, because I didn't feel up to driving the M4 - exceptionally annoying.

Anyway, tonight is the last night of Tom's tour, so I treated myself to one of several things I sometimes do when he's away. Pathetically innocent things, I hasten to add. Last time it was 'Titanic' and that wasn't long ago enough to do it again. So tonight I went for The Big Woody Allen Double Bill - 'Annie Hall' and 'Manhattan'. I saw them both for the first time more than 20 years ago, and goodness knows how many times in the intervening years, but still notice something new in them every time.

Glorious. Humour like that is the best kind: it shows up his serious points and makes them palatable. Who else could have dreamed up that scene with the skeleton, or the Planetarium, or the view of the bridge at dawn, in 'Manhattan'? Or the lobsters in 'Annie Hall'?

By the way, contrary to The Guardian and various other daft commentators, it IS possible and not yet illegal to do the following:

* Enjoy Woody Allen's films without condemning or condoning his action in marrying his ex-wife's adopted daughter;
* Enjoy Wagner without being a Nazi;
* Enjoy Chopin, Schumann and Liszt without being anti-Semitic;
* Enjoy Gershwin's 'Porgy and Bess' without believing that it's supposed to typify and therefore stigmatise or misrepresent the whole of African-American culture, or to be patronising thereto;
* Enjoy the soundtrack of 'Manhattan' - Gershwin again - without condemning it for not being an original soundtrack;
* Enjoy Korngold's serious music even though he wrote original soundtracks for Hollywood and dared to use tonality after 1930.

(This could go on forever, but The Guardian has recently had it in for Gershwin in a big way - see Gary Younge here and Joe Queenan here - and I think it's all gone a little too far. He's a great composer, already, so leave him alone, like it or lump it.)
Posted by Jessica at 11:41 pm

Beware of parties bearing sushi canapes.
Posted by Jessica at 8:57 am