Not everyone likes cats

The LPO, fresh from last week's Southbank triumph, headed for Baden-Baden for the opening leg of a short run of Glyndebourne's Tristan und Isolde. Dress rehearsal & three performances, several days apart: the band is supposed to fly there and back for each occasion (on performance day, via Frankfurt and a 2 1/2 hr coach journey). The other day the first show started late because the plane was held up. We hear that this was because of problems with a cat in the hold.

Sir Georg 'Ginger Stripes' Solti asks me to point out here that he was safely at home tearing up manuscripts in the study.

Blogging may be thin on the ground due to performances 3 & 4 to which I'm heading tomorrow. Taking camera along to find B-B 19th-century haunts of Clara Schumann, Brahms, Viardot, Turgenev et al.
Posted by Jessica at 8:40 am

Queuing for returns at the Barbican

It's an unusual sight: a line of people snaking through that sunless foyer behind a sign marked 'Queue here for returns'. The Barbican was full to busting last night for the opening of the London Symphony Orchestra new season, Gergiev conducting Mahler 3.

A startling performance, containing moments of phenomenal magic. The opening of musical windows as Pan brushes through in a gust of air from another world at the end of the second movement, shaking away the offstage enchantment of the Venetian song; the hushed tremolandi in which the whole audience held its breath; Anna Larsson's persuasive mezzo uttering the words 'O Mensch'; the choirs singing from memory; the ultimate tenderness as the final movement began.

Gergiev has the most extraordinary hands: big, loose paws with talons that quiver and shiver and flap, expressive to the last fingertip. I don't know how anybody follows his beat, but the chemistry is powerful: not so much a beat as a thread, created by charisma and, one supposes, respect, a tightrope of communication on which the orchestra balanced with poise and assurance.

It was also extremely loud. The first movement left me reaching for a non-existent volume knob. Was it the hall or the orchestra? Should one have this sensation in Mahler? Are we so desensitised by pop music and aeroplanes and iPods etc that we need excessive loudness in Mahler too? Still, it was worth it. Lingering images include Larsson, resplendent in a wonderful dress of dusky pink and plum-coloured silk, apparently transfixed by Gergiev's feet as they left the podium for the air in the last movement; the lengthy ovation, which didn't want to end; and my companion for the evening remarking, on the way out, 'we have a DVD of Lenny doing this which is really incredible...'

So, they're queuing for returns at the LSO; the refurbished RFH has more life in it than ever before; you can't get into anything good at the Wigmore for love or money; and the Proms has recently announced that this season produced its best-ever ticket sales. The Ring opens next week and they've scheduled an extra 'preview' cycle, which began yesterday. Forgive me for saying so, but from here it doesn't look as if classical music is dead.
Posted by Jessica at 8:34 am

The rest is news

Alex Ross's book The Rest is Noise has reached print at last. Congratulations, Alex - and I'm looking forward to the UK edition from Fourth Estate which is due out here in spring. Stylists as fine as Alex are a rarity in classical music writing and this volume looks certain to become a classic. If anyone out there still hasn't sampled Alex, here's a link to his Sibelius chapter - some of the most beautiful writing about music I've ever seen.

Chris Foley of Collaborative Piano alerts today to an interesting innovation: he's created a Classical Music Pagecast on Pageflakes. Technotwit here hadn't come across this idea until now, but it's good: the ultimate blogroll.

Opera Chic has found a real Italian tenor and links to a Youtube video of him singing Nessun Dorma. Voice to die for. Name: Fabio Armiliato. Thanks, OC!

And over at Think Denk, Jeremy has created a side-splitting scenic spoof: Shakespeare's little-known tragicomedy about life, love and death al dente among passionate youngsters in New York, Romeo and Juilliard. Get along there quick and meet Romeo, Mercutio, Candy and the Ghost of Dorothy DeLay.
Posted by Jessica at 8:48 am

Some of my favourite men wear tights 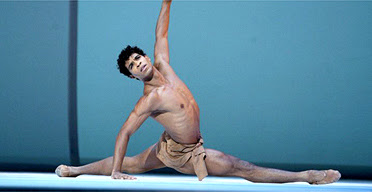 The Guardian today runs an extract from the autobiography of Carlos Acosta (picture above shows him without said tights...photo credit by Tristam Kenton, from The Guardian).

When the news reached my father's ears that I was running around the streets with gangs, he said to my mother, "We have to do something, Maria, otherwise we're going to lose the boy." Our neighbour Candida, whose nephew was one of the principal dancers with the Cuban National Ballet, had a suggestion: "You say he likes dancing? Why don't you send him to ballet school?"

My father's eyes lit up. Ballet! Suddenly there was hope. I was only nine, but I still remember that day when my parents told me their plans.

"What's everyone in the neighbourhood going to think? They'll say I'm gay!"

"Listen, you're my son and the son of the tiger shares his father's stripes. If anyone calls you gay, just smash his face in, then pull down your trousers and show him what you've got between your legs."

"But Papito, I want to be a footballer."

"Your mother and I have made up our minds, and that's that. It's your future, my boy!"

Meanwhile I have a hot date with my tv tonight: special documentary Nureyev: From Russia with love on BBC2 at 9.30. Watch clips here. And BBC4, the digital channel, is showing the Fonteyn & Nureyev film of Kenneth MacMillan's Romeo and Juliet immediately afterwards. Is Acosta the closest thing we have now to Nureyev? I reckon so...

Nureyev, for a while, had a house about ten minutes walk from where we live. Sometimes I stare over the wooden gate towards the door that was once his, trying to imagine a creature as self-willed and wild as that living somewhere as ridiculously bourgeois and uneventful as this suburb. Not that he stayed long. One biography tells the story that he decided to move after an occasion when he left late for a performance at Covent Garden and jumped on the District Line at East Putney in the wrong direction.
Posted by Jessica at 4:19 pm