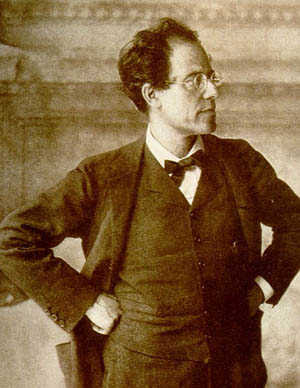 GM: "I really must get some bathing shorts..."


Thought it might be fun to go with some friends to listen to the LPO playing Mahler 2 last night at the RFH, with Simone Young conducting. It was fun. We egged on Tom and his colleagues as they rode the surf waves through the Totenfeier, tapped our feet as the second and third movements jaunted along like Offenbach and the nice loud, slow passages towards the end made us think of relaxing in Doyles Fish Restaurant on the beach at Watson's Bay watching the sunset over Sydney Harbour, enjoying fresh barramundi with a glass of...

Hang on. This is Mahler 2, the 'Resurrection' symphony: a crisis of faith and lack of it. "This is an angry protest against death's dominion," says the programme note of the first movement. Mahler described the scherzo: "the world and life become a witch's brew [resulting in] disgust of existence in every form". That familiar tune that keeps returning in the last movement's perambulations is the bloody Dies Irae. This symphony is a matter of life and death.

"What is life and what is death?" wrote Mahler, explaining the first movement. "Have we any continuing existence? Is it all an empty dream, or has this life of ours, and our death, a meaning?" He said: "My need to express myself musically begins at the point where the dark feelings hold sway, at the door which leads into the 'other world' - the world in which things are no longer separated by space and time."

I found myself longing for Solti - the real, Hungarian, pile-driving, Screaming Skull Sir Georg - who would have electrified the entire South Bank. He would have had us on the edge of our seats, trembling on the brink of the chasm between heaven and hell. He would have terrified us with demoniac plainchant, made those clarinets snarl with cruelty and the violins and percussion hiss like asps, and at the last he'd have lifted us up to the blinding brilliance of that eternal, primordial light. And there would have been glory, tears, catharsis.

There were some justified complaints recently in the blogosphere (and elsewhere) about Gergiev's No.3 being under-rehearsed the other day. But Gergiev does have fire, imagination and a seriously galvanising presence. Last night's one-pot dinner was equally under-cooked, despite having had considerably more real-time rehearsal; soprano Melanie Diener, who can be wonderful, was having an off-night; and actually an evening at Doyle's would have been far preferable to a performance of such meaningful music played with utter meaninglessness. Young left us in no doubt that it was all an empty dream. Or just empty.

Word on the ground has it, meanwhile, that La Nina has pulled out of singing the Four Last Songs in the LPO/Young all-Strauss programme on Friday, though I don't know why. And if Also Sprach Zarathustra is going to get the Watson's Bay treatment too, then I'm staying home with Solti.
Posted by Jessica at 8:46 am

I have a largish piece about Korngold in today's Independent.
Posted by Jessica at 11:15 am

I found this on Youtube and could hardly believe my eyes/ears. This is from Korngold's mid-1930s Hollywood musical Give Us This Night starring Gladys Swarthout and Jan Kiepura, the great Polish tenor for whom Korngold created the role of The Stranger in Das Wunder der Heliane. Kiepura plays an Italian fisherman who is 'discovered' and transformed into an opera star, singing Romeo to Swarthout's Juliet. Here is the love duet that closes the opera-within-a-film and the film itself. And if you think this is OTT, just wait until you hear Heliane.

I have only ever seen this film once before, on a tiny reel-to-reel machine in the basement of UCLA in 1993. Some of the melodies are so delicious that if Pavarotti had got hold of them they'd have been world famous 20 years ago.

The amount of excitement surrounding the forthcoming Korngold celebration at the Southbank is absolutely fantastic. Latest news is that BBC Radio 3 is to feature Korngold in 'Music Matters' on 20 October and will be talking to people who were close to the composer in person; and on 26 October 'In Tune' will be interviewing musicians involved in Korngold Day on 27th, including Anne Sofie von Otter and Bengt Forsberg.

Here's a link to the details of 27th. (Not sure how/why he has been transformed into 'Eric' on this page, since his name is, was and always will be Erich Wolfgang...)

And here are links to the LPO's Korngold Focus concerts:

And finally, here is Renee Fleming singing 'Ich ging zu ihm' from the Prom on 6 August, on Youtube. Listen, watch and marvel. Heliane lives! (The embedding function is not available for this video.)
Posted by Jessica at 6:22 pm

In case anyone was hoping to come to my Alicia's Gift reading at The Red Hedgehog in Highgate tomorrow (it was flagged on my permasite), please note that it's been cancelled due to circumstances beyond my control. Hopefully the one on 8 December, linked to the recital by Peter Donohoe, will go ahead.
Posted by Jessica at 1:38 pm