This one. This waltz.

Howard Jacobson, one of my favourite columnists, writes this super article today in The Independent about his visit to a Leonard Cohen concert at the O2.

I love this paragraph:

"I like it that he doesn't jig about. Such a change to see someone on a stage, immobile – as still as thought. We have the attention span of children. A thing will interest us only if it sparkles and moves. Madonna, Michael Jackson – people come back from their concerts raving about how well they move as though moving is a virtue in itself. I don't get it. If you want moving ring Pickfords. Leonard Cohen barely stirs, limiting himself to crouching over his microphone into which he whispers with hoarse suggestiveness."

The same is very often true of the finest classical performers: think of Heifetz and Oistrakh on the violin, Barenboim at the piano, etc. The focus is the music. The energy is not dissipated by unnecessary movement and histrionics. It's very much in keeping with Alexander Technique principles: eliminate excess muscular effort and concentrate the energy where it is most needed. In Cohen's case, the voice. In Heifetz's, the instrument in his arms. Each mite of force that goes into extraneous movement is a morsel removed from the core of what the artist is trying to achieve. That is not to advocate stiffness: just concentration and good sense.

I would have liked to go and hear LC too, but it is almost quicker to get to Marseilles from where I live than to the O2, and the great man's Albert Hall gigs were a) ROH prices, b) sold out but for a few restricted view tickets at £55 each. Technically this makes Leonard Cohen into Heifetz and Rolando Villazon at the same time. Not to mention Lorca.
Posted by Jessica at 1:19 pm

Philippe & Claire on IN TUNE today

Philippe Graffin and Claire Desert will be on BBC Radio 3's IN TUNE today, playing and talking about some of the pieces on the Hungarian Dances CD. Those within bowling distance of Cambridge can go and hear their recital at Kettle's Yard Art Gallery tomorrow, Thursday. I'm told they are on near the start of today's programme, so switch on at 5pm and listen out for a searing violin and some lovely French accents. And stick around to hear the phenomenal tenor Mark Padmore. The programme will be available on Listen Again for a week, for those in the UK.

UPDATE: Link to Listen Again for another 6 days

UPDATE: apologies to our overseas would-be listeners trying to access this broadcast from places like New York and Bucharest - I think Listen Again may only be available in the UK, even in this day and age...
Posted by Jessica at 8:53 am

Beautiful times among the Titians 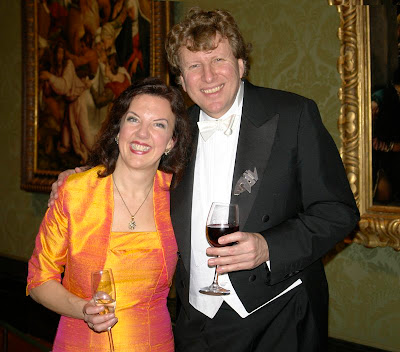 A touching and tender day at the National Gallery for the Dame Myra Hess commemoration. Tasmin Little and Piers Lane (pictured) gave the evening concert, with powerful performances of Elgar and Poulenc; in the middle, Piers performed Hess's arrangement of 'Jesu Joy' which had everyone in tears - not least because he sounded not unlike Hess herself. The Gallery commissioned a new piano piece from Nigel Hess - great-nephew of Dame Myra and an award-winning film composer who wrote, among other things, the score for Ladies in Lavender (including that gorgeous pastiche violin concerto that always leaves everyone wondering what it is and why they don't know it). He produced an 'Improvisation on Jesu, Joy' which Piers played with the same tenderness as the Bach itself. Beautiful - pastel-coloured, nostalgic, heartfelt.

Lunchtime saw an extraordinary performance by the Contiguglia Twins from New York, who played the socks off Howard Ferguson, Schubert and Beethoven. They came to Britain to study with Hess as young boys and played the Schubert Variations on an Original Theme for their Wigmore Hall debut. And... I've heard of identical, but this was quite something. I'm reliably informed that you can tell them apart when you know them well.

Celebrations followed among the Titians. On days like this, listening to world class music in historical surroundings then sipping rather good wine next to iconic Renaissance art, it's great to be a Londoner.
Posted by Jessica at 8:37 am

Today is the now-annual Dame Myra Hess Day at the National Gallery here in London. Piers Lane - a Hess 'grand-pupil' via his teacher, the late Yonty Solomon - is artistic director of the event which commemorates Hess's daily lunchtime concerts held in the Gallery during World War II, with music performed in the Barry Rooms where her series took place - though we have the paintings back now.

This year's event also celebrates the vital contribution to that series of her friend Howard Ferguson the composer, whose Partita for Two Pianos will be performed at lunchtime by the Contigulia Brothers from New York, themselves former pupils of Hess. There's a discussion chaired by Piers mid-afternoon, and this evening he and Tasmin Little will play war-scarred violin sonatas by Elgar and Poulenc.

We couldn't have this day without this:

Blogger's template has reduced us to ranking the top 10 conductors rather than the top 20, so I have selected those who have received four nominations or more. Please see the poll in the sidebar and get voting!

Please note that you may vote ONLY ONCE and for ONLY ONE CHAP! Polling closes at five to midnight on Sunday 30 November, so we will have the final result first thing next Monday morning.
Posted by Jessica at 11:42 am