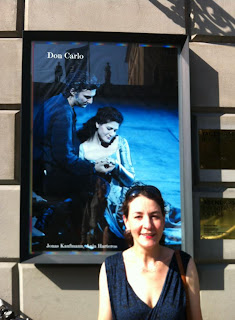 So last night, here in Munich, I heard Don Carlo with Jonas Kaufmann sounding perhaps the best I've ever heard him (and you know how good that is), Anja Harteros sounding like a platinum-plated Maria Callas only possibly better, Rene Pape sounding like King Marke as King Philip II and a baritone new to my radar, Ludovic Tezier, as Rodrigo sounding like a presence who will dominate his repertoire to very fabulous effect for years to come. How many great voices can you have on a stage at any one time? It occurs to one that - perhaps unusually for a Verdi performance - one could reassemble the same team for a certain thing by Wagner to fine effect, one named Tristan und Isolde...

But oh dearie dearie dear... I went and missed Barenboim's Gotterdammerung at the Proms, and today have been inundated with messages full of overjoy, overwhelmedness or plain old Schadenfreude from those who were there, or heard it on the radio, or who are calling for a Ring cycle to become a regular feature of the Proms, please, something I will second with all my heart (provided it's done by the right performers). After a 20-minute ovation, Barenboim made a speech declaring that what the audience had been through with him and his musicians was something he had never even dreamed of. Can't manage to embed the code for some reason, so please follow this link to hear it: http://www.bbc.co.uk/programmes/p01ddfdr

Extra plaudits for the Proms this year for having made me seriously question the wisdom of taking a summer holiday abroad while they're on.

Here's my write-up for the Indy of last night at the Proms, where things are turning seriously steamy in the Ring. A slightly less packed turnout for this one, perhaps because the temperatures in the hall have been in the news, but hey, there was more air for the rest of us as we rushed back for episode 3. If this is what happens in a Wagner anniversary, please can we have another next year? I mean, he'd have been 201 - isn't that worth celebrating too?

Shock confession: this is the first time I have actually enjoyed Siegfried. The first act can be heavy going and unless you have a top-notch chap in the title role, so can the rest. It needs to be done very, very, very well, all round, to succeed (at least where my ears are concerned). This one...just flew by, with laughter, tears and suitably raised consciousness. Where's it been all my life? Canadian Heldentenor Lance Ryan as Siegfried simply owned the role and thus the evening.

If you were wondering whether to go to Gotterdammerung on Sunday, but hesitated: stop thinking and just go. I can't, as I'll be in the only other place an opera buff (never mind critic) should be just now, which is in Munich, listening to Jonas in a spot of Verdi. But even with that to look forward to, I am sick as the proverbial parrot about missing the last night of this Ring cycle.

Wagner would have loved his operas being done at the Proms: to a huge crowd of passionate enthusiasts in the arena who have come from far and wide for the occasion and pay just a fiver to get in. He wanted admission at Bayreuth to be free. It didn't prove very practical, of course, but that was the original idea.
Posted by Jessica at 11:04 am

Much as I love today's great tenors, I'm not sure there was ever anyone else quite like Fritz Wunderlich. Here he is singing Beethoven's An die Ferne Geliebte: a work much quoted by Schumann as a thinly coded message to Clara...and in more recent times by many others for the same reason. This post is dedicated to anyone who's ever missed someone.

Why do you play the violin?

Well, maybe you don't, yet - but you might when you hear why Simon Hewitt Jones and his ViolinSchool teachers and pupils do. This heart-warming film might just get some of us (or our kids) going along to try as well.

I learned the violin on and off until I was 18. I wasn't much good at it and have scarcely touched it since - but, come to think of it, there is still an instrument under the piano, waiting for a little attention...

The Violin School is just across the road from the St James Theatre (where much of this video was filmed), a short walk from Victoria Station.

I offer you this incredible performance by La Yuja partly because life feels ever so slightly like this piece of music right now. I don't know what Rimsky's bees are on, but whatever it is, I may need some. Fasten your seatbelts.