Look who I'm off to see tomorrow

OK, it's not much to do with Schubert, the trip tomorrow. It's the Beethovenfest in Bonn and Andras will be playing a programme of sonatas including the D minor Op.31 No.2 and the 'Waldstein'. I haven't been to Bonn before and am a little excited at the prospect of seeing Beethoven's birthplace and also - unexpectedly, as I didn't know until yesterday that it existed - a Schumannhaus museum at the former asylum in Endenich (a suburb of Bonn), which is where our unlucky and much-loved Robert died in 1856. With Andras I'll be talking Beethoven, Bach, Bartok and big birthdays.

Meanwhile, enjoy his beautiful film about Schubert.
Posted by Jessica at 9:28 am

A quick explanation of the Flattr button

You'll have noticed a new little green button at the top of the sidebar and beneath each JDCMB post. Flattr is a nice invention for us "content creators": it facilitates "microdonations", by which you can give a few cents or whatever as a sign of your appreciation of something you have read online. You set up an account, send it a small budget of your choice, and when you see something that seems to merit a few pennies, you can click on its Flattr button to donate some. Proceeds from Flattr on JDCMB all go towards JD's blogging expenses, including train tickets, gluten-free porridge and, of course, Solti's cat food. More about Flattr from its site here. And also more about how it works, here.
Posted by Jessica at 11:29 am

A good night at the Gramophones...

A wee bit disorientating to find the Gramophone Awards shifted a) to mid September, b) to LSO St Luke's. But a fine venue it proved, hipper and airier than the good old Dorchester, snazzy in the pink spotlights which illuminated the heat-haze of some 115 candles.

Gone were the sexist comments of yesteryear, ditched in favour of fine words about the power of music to enhance lives and bring people together, and dedications of awards to a variety of parents, teachers and young music-lovers around the world. Gone, too, the all-male line-up of last time: Artist of the Year went to Alison Balsom, Record of the Year to Patricia Kopatchinskaja's disc of Hungarian violin concertos. Guitarist Xuefei Yang was there to perform some Britten songs with Ian Bostridge and Hungarian violinist Katalin Kokas played Bartok duos with her husband, Barnabas Kelemen. Not all good on the sexism front, though, as Decca's little film (they were record of the year) had to be started off by a simpering dollybird of a soprano who is perfectly good, but. No sign of Kaufmann or Calleja having to be anything but their good selves in the later images.

Many much-loved figures among the great and good were present, notably Julian Bream who received the Lifetime Achievement Award and thanked the industry, with sparkles intact, for recognising that he was not a bad guitarist.

It was a particular good night for Bartok, whose Violin Concerto No.2 played by Patricia K was Record of the Year and whose music for violin and piano played by Barnabas Kelemen and Zoltan Kocsis won the Chamber award. Wonderful to see Barnabas pulling in at the top - regular JDCMB readers will know that I've been shouting out about him for quite a while. He is not only a magnificent player technically, but the most thorough and exacting of all-round musicians in that fabulous tradition that Hungary's Franz Liszt Academy has long championed: pure, penetrating, powerful. The Gramophone Awards are a fine way indeed to be put firmly on the map, and with luck megastardom should await. Hear Barnabas, Katalin and their string quartet at the Wigmore on Sunday morning and get his recording here. I am hoping to go and see them in Budapest later in the year.

A fine night, too, for pianists. We had a performance from Benjamin Grosvenor, whose next album is due out in February - exact content still under wraps, but to judge from his glinting, whimsical Albeniz and Shostakovich transcriptions, there'll be some intriguing Golden-Age-style stuff on it. He handed over the Young Artist of the Year title to 18-year-old Jan Lisiecki, who played Bach's Partita No.1 exquisitely. Steven Osborne was Instrumentalist of the Year and treated us to a short extract from his winning disc, Musorgsky's Pictures at an Exhibition.

No pics by me this time because my phone was out of juice (as was I) after a lengthy day going to Bristol and back for, er, the BBC Music Magazine Awards jury panel meeting. I've been ploughing through a very, very, very large pile of discs for that. A topic for another time.

UPDATE, 4.15pm: One spotted James Rhodes leaving early. Perhaps this was why: http://www.theguardian.com/music/musicblog/2013/sep/18/james-rhodes-classical-music-needs-an-enema-not-awards?CMP=twt_gu
It didn't help, I might add, that they took 2 hrs to present 6 awards, and no food materialised til 10pm.
Posted by Jessica at 9:36 am

A little way round the South Circular from my neck of the woods, pianist, teacher and blogger Frances Wilson - whose blog The Cross-Eyed Pianist has become a must-read for the keyboard-inclined - has been busy organising a brand-new series of very social concerts involving both professional and amateur pianists. Here she is to introduce it. JD 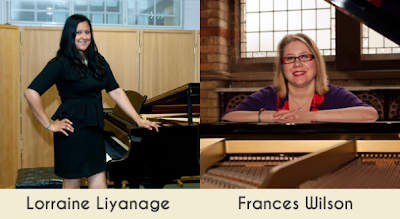 The South London Concert Series is a unique new concert concept, created and curated by myself and fellow pianist, harpsichordist and piano teacher Lorraine Liyanage, in which we offer professional and amateur pianists the opportunity to perform in the same formal concert setting.

The series developed out of the London Piano Meetup Group, which we took over hosting in May 2013. The group, run via Meetup, a social networking platform which allows people with shared interests to plan events and get together, had been rather dormant up to this point, but it has now been transformed into a lively and friendly “club” for amateur pianists, with monthly performance platforms, masterclasses and workshops with visiting teachers and professional pianists, concerts and courses, and social events in and around London.

Lorraine and I met in September 2011 on a weekend course hosted by my teacher, Penelope Roskell. We hit it off almost immediately, not least because we were both working for diplomas and had the same two pieces by Liszt and Messiaen in our programmes. Talking during the coffee and lunch breaks on the course, we discovered a mutual love of all things piano, in particular a desire to support and inspire amateur pianists to perform, share repertoire and meet other like-minded people.

‘We both enjoy performing and we love meeting other pianists!’ says Lorraine, who is very active in her local community in south-east London, running the busy and successful SE22 Piano School and Dulwich Music Festival (now entering its third year). ‘We set up the London Piano Meetup Group because we felt amateur pianists lack opportunities to perform, particularly on a really fine piano and before an audience.’

In many ways, I have Lorraine to thank for encouraging me to start performing regularly again (something I had not done since school in the 1980s), and the opportunities she gave me – at her student concerts, and via the London Piano Salon (the precursor to the London Piano Meetup Group) – undoubtedly helped me gain confidence and an ability to communicate with an audience which led to success in both of my performance Diplomas. I understand the value of being able to put repertoire before a non-critical audience, whether in advance of an exam, festival or concert, or simply to share music.

I come across many amateur pianists who are extremely talented, who play at what can be considered a “professional” standard in terms of repertoire, technique and artistic flare, but who have chosen a career path other than music. Many of these pianists lack performance opportunities: our Meetup group provides regular performance experience in a central London location, enabling pianists of all levels to put repertoire before an informal and friendly audience in a supportive and encouraging environment (most events are held at Peregrine’s Pianos). Our events are nearly always sold out almost as soon as they are advertised, and the feedback afterwards is incredibly positive. We enjoy a varied range of repertoire, from Baroque to contemporary classical and jazz, and we often extend the meeting into the pub afterwards, where the “piano chat” can continue over a glass or two of wine.

The South London Concert Series is our latest initiative. The idea grew out of the London Piano Meetup Group's launch event in May 2013, at which Emmanuel Vass, a prize-winning recent graduate from the Royal Northern College of Music, gave a short recital, including his stunning Lisztian ‘James Bond Concert Étude’ (his own “mash up” of three iconic themes from the James Bond films, complete with sparkling cadenzas and vertiginous virtuoso passages). It was so popular with members, especially the opportunity to meet and talk to Emmanuel afterwards, that we decided to extend the format.

Keen to support young and emerging musicians, and pianists focusing on lesser-known and rarely-played repertoire, we hope the series will provide a unique way of presenting classical and contemporary music in an intimate venue. My many conversations with professional pianists reveal, by and large, a great willingness to support and inspire amateurs, for we are all quite humble when we sit at the keyboard. Lorraine and I hope that by bringing together professional and amateur pianists in the same concert setting we can provide opportunities for young musicians (students in conservatoire or people who are just embarking on a professional career) while also offering inspiration and encouragement to amateur pianists.

The concert format is quite simple: an hour of music, including a recital by a guest artist of around 30 minutes, followed by socialising and a chance for everyone to meet the performers. The venue, the beautiful 1901 Arts Club near Waterloo Station, is ideal for this: it recreates a nineteenth-century salon in its décor and ambiance, and boasts a fine Steinway C grand piano. We hope the atmosphere will be very much one of “music for friends and amongst friends”.

The South London Concert Series launches on Friday 29th November 2013 at the 1901 Arts Club with a recital by Helen Burford, featuring works by Satoh, Magi, Butler and Rakowski, and guest performances by Susan Pickerill, Daniel Roberts, Emma Heseltine and Mark Zarb-Adami. Future concerts will include performances by pianists Emmanuel Vass and Angelo Villani.

Tickets cost £15 and are by application only: please contact southlondonconcerts@gmail.com to apply for tickets. The 1901 Arts Club's exclusive bar and lounge will be open for the enjoyment of ticketholders after the concert.

Frances Wilson is a pianist, piano teacher, concert reviewer and blogger on music and pianism as The Cross-Eyed Pianist. Twitter @CrossEyedPiano

This is a trailer for a film about Theresienstadt and the musicians who were incarcerated there, including Alice Sommer Herz and Coco Schumann. The associated CD by Daniel Hope, Anne Sofie von Otter and friends was released several years ago, and it is very good to see that they've now turned it into a documentary. DVD due out soon. Please watch and listen.
Posted by Jessica at 8:16 am