Just found online the radio broadcast from 1963 in which John Amis interviews the glorious Dame Myra Hess, whose cut-glass accent and irrepressible humour are firmly in place. She remembers what happened when she took a "wrong turning" in Brahms 2 with Sir Henry Wood in 1908, a concert for which she received the "large fee" of 3 Guineas. "Sometimes I was ten and six to the good!" she declares of her mother's book-keeping.

Beecham, she says, was "impossible, because you never knew when you were going to get a rehearsal". And he was "terribly naughty", she adds, performing without the score in music that he didn't always know terribly well.

She reveals, too, that she used to play her own cadenzas, but the manuscripts were now "destroyed and burned". And she talks a good bit about the National Gallery wartime concerts.

If anyone thinks women cannot be the greatest instrumentalists in the world, they need to experience this, right now. Martha Argerich, filmed in 1966, plays Liszt's Hungarian Rhapsody No.6.

(Please note, incidentally, that Argerich will be performing at the Wigmore Hall on 2 November in duo with Stephen Kovacevich, in a special concert to celebrate his 70th birthday. You want to be there.)

Great to see International Women's Day really flying this year. There's such a lot going on that I feel quite boggled. Of course, one looks forward to the day when women's equal representation, recognition, pay and respect are taken for granted as human rights and none of this special stuff will be necessary any more. Sad to reflect that instead we're thanking our lucky stars that we live in a part of the world where we have the freedom to have this festival.

If you're in London, get yourself to the Southbank for the WOW Festival - Women of the World - culminating in the annual Mirth Control concert on Sunday night. It features Alice Farnham and Sian Edwards conducting an all-female orchestra in rare works by female composers including Florence Price, plus appearances by amazing singer Angel Blue, the brilliant West End star Sharon D Clarke, the marvellous young musician Ayanna Witter-Johnson, ace comedian Sarah Millican and more. Sandi Toksvig is compère.

Over on BBC Radio 3 the celebratory programming started earlier this week and extends into next as well. UPDATE: fabulous article here by the R3 presenter Sara Mohr-Pietsch covering this ground and more.

Here is their line-up for the weekend and next week. On Sunday it's the entire day.

From an online post relating the contents of Kanye West's talk to Oxford University:

Um, right, so if Kanye West needs quiet in order to deliver this talk (you can read "more or less exactly" what he said at Oxford in that post), why should a pianist trying to perform the last three Beethoven sonatas need anything different? Hopefully this should put the kibosh well and truly on trendy ideas that we should allow talking, eating and texting in the concert hall.
Posted by Jessica at 8:51 am

Today a dream has come true for the LSO.  They just confirmed that Sir Simon Rattle is to take over as music director in 2017. Congratulations, guys. Brava, managing director Kathryn McDowell, with her well-placed butterfly net. And good luck with everything this may bring to London at long last.

Wondering what this means for the rest of the orchestral scene in London, meanwhile. 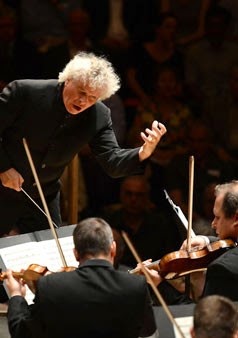 Rattle said of his appointment:


“During my work with the LSO over the last years, I noticed that despite the Orchestra’s long and illustrious history, they almost never refer to it. Instead, refreshingly, they talk about the future, what can they make anew, what can they improve, how can they reach further into the community. In terms of musical excellence, it is clear that the sky's the limit, but equally important, in terms of philosophy, they constantly strive to be a twenty-first century orchestra. We share a dream in which performing, teaching and learning are indivisible, with wider dissemination of our art at its centre. I cannot imagine a better or more inspiring way to spend my next years, and feel immensely fortunate to have the LSO as my musical family and co-conspirators.”