The ballerina Melissa Hamilton is to leave Covent Garden for a year in order to work with the Semperoper Ballet in Dresden during 2016, as a principal dancer. (Here's my recent article about her from the Independent, September 2014.)

At the Royal Ballet she is still a "first soloist" and those of us who've been loving her performances can't help feeling she should be a principal here too by now. She is a sophisticated dance actress and an intelligent and intuitive performer, as well as being phenomenally determined, and this is an opportunity she deserves in every way. With the German company she will dance Manon, La Bayadère and her first Princess Aurora in The Sleeping Beauty. Initially, Hamilton will appear as a guest artist with the Semperoper Ballett dancing the title role in Sir Kenneth Macmillan’s Manon for the company’s upcoming premiere of the production in November 2015.

I've been drafted in as a late-notice pre-concert speaker for my much-loved CBSO today and tomorrow. Concert is a truly yummy programme involving a lot of Mozart and Haydn, conducted by Andris Nelsons - who last night scooped the Royal Philharmonic Society Award for conductor of the year. Today the talk is at 1pm and tomorrow again at 6.15pm, with same concert programme to follow. https://cbso.co.uk/event/haydn-in-london/

Do come along and say hi if you're there.

And rather than staying over in Birmingham, I'm heading home tonight & going back tomorrow evening - so that tomorrow morning I can get down the polling station and place my vote. Never forget: people died so that you could have the right to vote. SO DO IT.
Posted by Jessica at 8:20 am

Shchedrin on writing Carmen for Plisetskaya

The news of Maya Plisetskaya's death marks the end of an era for ballet. The great Bolshoi ballerina, who was 89, set extraordinary standards for all around her; not only through her technique, physique, acting and star quality, but also in terms of the way her artistry galvanised all who saw her and helped to revolutionise the repertoire, leaving a legacy that spreads far and wide across the dance world. Here is an obituary that fills in the background and extraordinary life story of the Soviet-era star who was once considered such a defection risk that the KGB even bugged her bed.

I met Plisetskaya and her husband, the composer Rodion Shchedrin, several times, notably at Philippe Graffin's Festival Consonances de Saint-Nazaire between 2006 and 2009. Plisetskaya spoke little English, unfortunately; on these occasions, Shchedrin seemed the public face and spokesman of the pair, while the ballerina - though so forceful on stage - seemed gentle, shy, enchanting, moving somehow in a world of her own. Once when they came to London I met Shchedrin for an interview and asked him to tell us the story of how his Carmen Suite came to be written. Here's his answer (accent untweaked).


"It was Maya’s idea to dance Carmen and first her step was to Shostakovich because we have very good relation to Shostakovich. She wrote libretto herself. We came to his dacha and Maya read him this libretto, of course not a professional libretto, and he said: 'Yes yes, it’s interesting, I will be thinking, I will be thinking...' and after few days he call us and said: 'Please come, I have final decision.' So we came, and he said, 'It is very nice libretto' - he is always speaking like that - 'but I refuse.' Why? 'I am very busy. Because if public will come into concert hall and want to hear song of Toreador they wil be totally disappointed. I am very busy, I am very busy, please excuse me...'
"Then Maya asked Khachaturian and he said 'Why you need me? You have a composer at home, ask him!' And then she push me, and I remember the words of Shostakovich – he is a wise man, a wise man – and so I had to combine something: from one side it had to be something fresh, from the other side it had to be some connection with this famous melodies. And was idea, I think a lucky idea, only to have strings and percussion, because then it is a totally modern combination. The score by Bizet is fantastic, one of the best in the whole history of music. I took not only from Carmen but from L’arlesienne and his other work combined, but I had a good idea to combine strings with percussion.
"It also was some motivation because at that time strings in Bolshoi theatre orchestra was unbelievable, because it was 1967 and it was forbidden to emigrate from Soviet Union and the best string players were in Bolshoi Theatre and Leningrad Philharmonic with Mravinsky. Later around 1972-73 begin Jewish immigration from Russia to Israel, the best one because then they immediately go to America and in each orchestra the best playing in the strings are some fantastic Russian players. And also was excellent group of percussionists in Bolshoi theatre at the time. This was also some kind of motivation but in the second place – first was of course I dared to be totally far from this Bizet score without brass, woodwind, just percussion and strings, I did an orchestration that gave me many possibilities. The reaction of Shostakovich that without these melodies there would be disappointment, and some idea of the orchestration, a new point of view, and quality of the orchestra at Bolshoi at that moment in that year, altogether this gave me the inspiration to do this.
"My old publishers - it has been 15 years I have been with Schott, but before Schott, like all Russian composers, we all belonged to Sikorski - and they tell me that Carmen Suite is played every day somewhere in the world."

What better tribute, then, than Carmen itself?

Musicians set out to raise £10k for Nepal 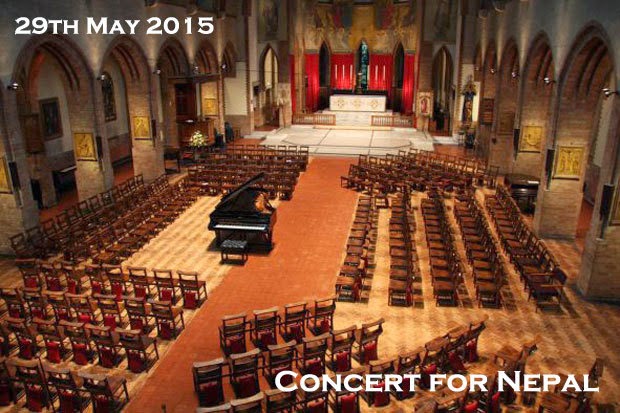 The pianist Alicja Fiderkiewicz and the cellist Corinne Morris are collaborating to bring together a number of classical stars to give a fundraising concert in aid of the Nepal Disaster. Taking place on 29 May in St Barnabas' Church, Ealing, the event brings together the pianists Murray McLachlan, Artur Pizarro, Viv Mclean and Carlo Grante, along with Corinne and Alicja themselves, and will also include a world premiere by composer Keith Burstein.


The entire proceeds of this fundraising concert will go to the DEC (Disasters Emergency Committee) Nepal Earthquake Appeal. Nepal needs 2 things: manpower to help get things up and running and money to access this help, to start rebuilding their lives.
With our fundraising concert, we hope to provide the DEC (Disasters Emergency Committee) with a contribution of £10,000.
If you can support our project, either by attending the concert, or making a donation via this page and sharing this with all your friends, then together we will make an impact and via the aid agencies already in Nepal, offer some much needed support and comfort.

Our sincere thanks for your help and support.

Please book tickets via the Indiegogo page, where you select them as your 'perk': https://www.indiegogo.com/projects/classical-music-gala-concert-for-nepal-disaster
Posted by Jessica at 11:05 am

A choreographer and his muse...

Coming up fast at Covent Garden: Wayne McGregor's new ballet Woolf Works, based on three Virginia Woolf novels and her life story. More of this soon. Meanwhile, here is Wayne working with his regular muse, the incredible Edward Watson, who is Orlando. Amazing to watch their connection as Wayne imagines something and Ed immediately knows how to make it real.