"I played a radiated piano" - Martha Argerich speaks in Hiroshima 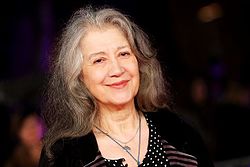 An actual interview with the extremely press-shy Martha Argerich has appeared in a Japanese newspaper after the great pianist visited Hiroshima.

In it she reveals that she played a piano that had been subject to radiation from the atomic bomb that destroyed the city in 1945, saying: "It was very much taken care of and had a lovely sound. I know the story of Akiko (Kawamoto, who played the piano). She was not obviously injured (by the atomic bomb) but the next day she died (of radiation) at 19."

She also declares that both the Holocaust and Hiroshima must be remembered as human tragedies, and speaks about her recent collaborations with Daniel Barenboim: "I have no musical disagreement with him, until now at least."

Read it all here.

Here are Argerich and Barenboim playing a Schubert duet by way of encore...


I'm off to Birmingham tomorrow to give a pre-concert talk about Sibelius for the CBSO (though unfortunately am fighting a lurgy and need to get my voice back pronto - please forgive me if I sound a little croaky). https://cbso.co.uk/event/sibelius-fifth

The concert, at Symphony Hall, concludes with the Symphony No.5 and it's good to see that it's being broadcast live on Radio 3 so we will all be able to enjoy Ed Gardner's conducting of this utterly scrumptious, inspired, original, glorious symphony for a little while thereafter. In the first half there's the Mendelssohn 'Hebrides' Overture and Lars Vogt is the soloist in Mozart's Piano Concerto in E flat, K271. The first of the two performances is tonight.

As for Sibelius - there is too much to say and squeezing everything into 25-30 minutes is no easy task, so I'm going to focus on the question of why, when we had a composer of such genius who was once voted the most popular classical composer ever, even ahead of Beethoven, and he lived to be 91, there wasn't more of his music. There's much to explore and chew over. Do come along if you're in town. Booking here: https://cbso.co.uk

Almost unbelievably, this happened the other day: 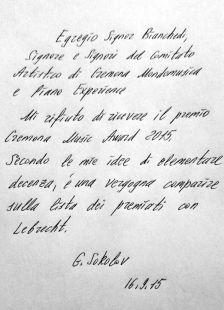 
'Dear Mr. Bianchedi, ladies and gentlemen of Comitato Artistico di Cremona Mondomusica e Piano Experience. I refuse to receive the prize, Cremona Music Award 2015. 'According to my ideas about elementary decency, it is shame to be in the same award-winners list with Lebrecht. [Signed] G. Sokolov'

There's something profoundly depressing about this.
The first startling thing is that to take such exception to a critic or commentator is to give them too much power over you. Look, all of us in the commentariat are minnows, and none of us deserve to be dignified with such importance. As Sibelius said, no statue has ever been put up to a critic (at least, it hadn't then). The second is that there are people in this business who are infinitely more poisonous than Norman Lebrecht.
If it's any comfort, most of us writers try to serve the art we adore by offering something we hope is worthwhile - ideally, we should be trying to uphold the musical values that we feel, after many years of study and experience, are the most solid and crucial. Sometimes we get it right. Sometimes we don't. But a tiny minority, for all I know (and I'm not speaking here of Mr Lebrecht), might have different motivations, which from the look of it could include anything on the spectrum from bitterness through jealousy to political ideology and, at worst, megalomania or a chemical imbalance.
Dear, great and wonderful artists, please listen only to this: the best thing you can do is to ignore us. We're not important. You are.

UPDATE: 30 September
Here is the official position of CremonaFiere itself, from its communications director, Paolo Bodini

Just to clear the official position of CremonaFiere, organizer of Cremona Mondomusica and the Cremona Music Award, I’d like to inform you that CremonaFiere launched the Cremona Music Award, which is given within Cremona Mondomusica and Piano Experience since 2014, in order to reward the international personalities that have arisen in their respective areas of interest in the world of music.In 2014, we awarded: • Micheal Nyman (“Composition” category) • Alfred Brendel (“Interpretation” category) • Norman Lebrecht (“Communication” category) • FuturOrchestra (“Project” category)These people came to Cremona to receive the prize, except from Norman Lebrecht, who was unable to come and sent a video message.This year, our Artistic Committee considered to award: • Krzysztof Penderecki (Composition) • Grigory Sokolov (Interpretation) • Corinna Da Fonseca Wollheim, music critic of the New York Times (Communication) • Stefano Belisari aka Elio (Project)Maestros Penderecki and Belisari, and Corinna Da Fonseca Wollheim have come to Cremona to receive the prize, while Maestro Sokolov sent us a letter to refuse the prize, justifying this choice with the presence of Norman Lebrecht among the people awarded in 2014.We don't want to discuss the personal relationship between Maestro Sokolov and Norman Lebrecht; we are just very sorry about Sokolov's choice, especially considering that Franco Panozzo, Sokolov's manager, sent us an email on August 4th, 2015, saying that Maestro Sokolov would have been very happy to come to Cremona to receive the prize, if he had been in Italy during Cremona Mondomusica. We also have to say that before that (June 29th, 2015) we informed Franco Panozzo about the people awarded in 2014, Norman Lebrecht included.So we have been surprised that just a few days before the prize-giving ceremony Maestro Sokolov took this decision.Best regardsPaolo Bodini

Why pop is played everywhere you go

Here's a fascinating piece that explains how and why ubiquitous, inescapable, commercial pop music is not very good for us.

Here are a few of its salient points.

-- Pop music has been dumbed down over the decades. Compared to the good songs of the sixties, today we're getting watered-down tat with scant musical content, using only a few basic chords.

-- These limitations can make us less creative, leading us to expect less of ourselves and others and our art, and this encourages us not to think outside the box.

-- Poor-quality pop is being used 'to brainwash listeners through predatory marketing strategies across all media channels'.

-- And note, this also shapes the way kids grow up.

-- It says, too, that songs are not played everywhere, constantly, because they are popular. They are played to make them popular.

Regular readers of JDCMB will already be familiar with my theory that when people have the opportunity to hear classical music, they mostly love it. It's just that it is not played very much, very widely, in places where it can be frequently and regularly stumbled across.

Here's what Opera North has to say about the results of its schools programmes with In Harmony in Leeds and Hull. It's more proof that learning music helps with learning everything.

We all know this by now. Yet how many more times do we have to hear it before that powers-that-be take some notice of it and make sure that every schoolchild in the country can have access to music education? See info below from ON's press office.

Opera North, the national opera company in the North of England, is celebrating a dramatic increase in academic achievement with two primary schools in Yorkshire, where it delivers intensive music programmes as part of the Company’s extensive Education work.


In Harmony Opera North, funded by Arts Council England and the Department for Education, began in Windmill Primary School in the Belle Isle area of South Leeds, in January 2013. Every child in the school participates in up to 3 hours musical activity per week during curriculum time and many children attend Opera North ‘After School’ music sessions three times a week. Most of the 362 pupils play a string instrument and enjoy weekly group instrumental lessons and orchestra sessions; everyone sings in an age banded choir.


All of the children enjoy giving regular performances to family and friends and they have all had the opportunity to perform at several events with the Orchestra and Chorus of Opera North; initiatives which helped parental engagement with the school rise from 7%-39% in 2013.


“I am delighted with these results, which prove that the In Harmony Opera North programme at Windmill Primary School continues to go from strength to strength. We have observed many significant effects on the pupils’ skills such as teamwork, co-operation, social skills and self-confidence. It is my belief that the cultural enrichment provided by In Harmony Opera North over the last three years has had a direct impact on the positive learning culture here at Windmill and subsequently contributed towards these improved results for our children.”

“The benefits of a rich musical curriculum have been well-documented and these results are already speaking volumes about the value of the arts and music in the classroom.  In addition, by offering our children frequent performance opportunities with professional musicians from Opera North both within their local community and across Hull we have been able to increase the children’s levels of confidence and self-worth.

“Parents are also developing real pride in their children’s increased abilities, and they acknowledge that the opportunities that their children are being offered is broadening the horizons and expectations for what they can achieve. We anticipate that as our partnership with Opera North continues, this confidence will enable our children to become more resilient, creative, successful learners who are able to manage their feelings, have empathy for others, and develop their personal identity.”