Solti does it again 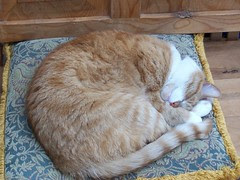 As I had the highest ever number of blog hits when I posted a photo of my cat Solti, I thought I'd wish you all a happy new year by posting another one.

Unfortunately, though, Solti's current state isn't too pretty. He got into a fight the other day and came in with a hole in his head. Today the vet dealt with the resulting abcess and now poor Sir Georg has a very bloody face, a bald patch and an enormous plastic collar to prevent him worrying at the wound. Not so much Long John Ginger this time as Shakespeare on an extremely bad day. Perhaps some disgruntled orchestral musician has been reincarnated as a neighbouring cat and wanted to get his revenge...So I'm posting the same old picture again instead!

Life isn't all bad, though: Solti got tuna for dinner. There's a moral in there somewhere.

HAPPY NEW YEAR, EVERYONE! Here's to a wonderful year of music in 2005.