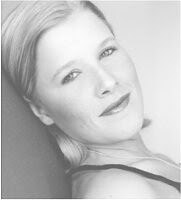 Apologies for lack of blog posts this week...it took a little time to recover from this particular birthday, never mind the associated hangover.

Having introduced one of the finest young pianists on the planet a few posts back, I'd now like to introduce one of the great sopranos of the century ahead. Sally Matthews sang Mahler 4 with the LPO yesterday (and is doing so again even as I write). She's been through some of the finest Young Artists schemes in the UK, including the Royal Opera House's, and was a huge hit in Gianni Schicchi at Glyndebourne last year. She tends to receive rave reviews wherever she goes and I think she's not yet out of her twenties. Last night was a prime example of why she is already so celebrated and why I reckon she will be even more so in ten years' time.

The voice is dark for a soprano - the richest vanilla ice cream swirled with dessert wine - and the clarity of the enunciation is exceptional. My German isn't brilliant, but I could hear the text and comprehend it quite well without even glancing at the words in the programme (I don't know this exquisite symphony intimately enough). Most magical of all, although her tone can be bright, large and glorious, were the soft passages: for a singer to create such absolute magic at PP level, while retaining all that beauty of tone and clarity of diction, is something special, unusual and marvellous. Given Sally's range and the richly romantic hue of her tone, I suspect that in a decade, or maybe sooner depending on her stamina and inclination, she might be Korngold's ideal Marietta...

It was just as well that Sally sang last night...Tom has threatened to have me assassinated if I say what I really thought about the conductor and the first half's piano soloist. Suffice it to say that there's a very, very kind review here, at Classical Souce.com.