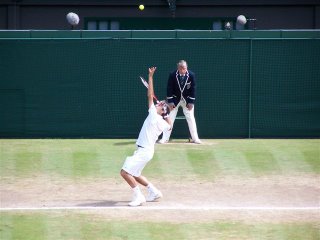 ...he'd probably be Juan Diego Florez. The effect is a little similar. While Nadal was mopping his brow, obsessively tossing one ball aside and giving grunts that could have been heard across Wimbledon Common, Federer stayed as cool as a glass of Pimms, delivering shots so perfect that they could make your heart sing just like Florez's high notes. Even mine, and I'm not the sportiest gal on the globe.

Watching the Wimbledon final live was totally different from watching on the TV. First, we weren't prepared for the noise when the players walked on, being used to concert applause from 2,000 rather than sports applause from 13,000. Next, the small screen simply can't convey what it must be like to have a 130-mile-an-hour serve flying straight for you, or what a feat it truly is to return some of those high-note shots. During some of the rallies, I had to hold my breath. I'd never expected to be so riveted. At this level, sport does become an inspired art.

Having seen Wimbledon on TV so many times, it was great to discover that it's real; the atmosphere was fantastic, the band of the Royal British Legion was an added treat, and it was, I must say, all extremely civilised. A fantastic experience.

The crowd backed Nadal, and he certainly put up a good fight, at least after the first set. Federer wasn't infallible, but at least that proved he was human. Above, Federer serves for the championship, photographed by the Tomcat (who maybe should have a new career as sports cameraman).
Posted by Jessica at 4:09 pm