King of the high Cs? Better believe it... 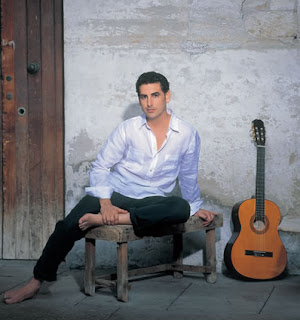 I'm high as a kite. Universal Classics held a little 'do' today for one of their best and starriest stars: Juan Diego Florez (above, photo credit: Decca / Johannes Ifkovits). Savoy Hotel; a collection of press & industry colleagues; and he sang three arias - the big whacks from Rigoletto and La fille du regiment (the one with nine high Cs) plus 'Granada' from his Sentimento Latino album, and I was standing 4 metres from him throughout. I nearly died of joy.

It's unbelievable. The security of that technique is, as far as I can tell, more comparable to Jascha Heifetz than any other singer I can think of. There's no shadow of doubt, but also no flaw in the pouring of the honey, just utter beauty and wonder and a hell of a lot of oomph, at least close to. Florez's voice is sometimes said to be 'small' or, better, 'small is beautiful', but it certainly didn't sound that way (beautiful, yes; small, no!) from 4 metres... It was hard to get the press & industry to stop applauding afterwards, and that takes a little doing.

I shook his hand afterwards. Yes, alas, I have washed since. But tomorrow I get to interview him (at least, 98% sure that I will), so maybe I can replenish that supply of wonder. And yes, he's drop-dead gorgeous - but with a voice like that, who even needs those sultry eyes?

He opens in La fille du regiment at Covent Garden in January.