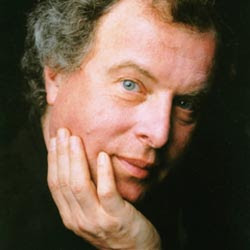 One of the delectable things about writing booklet notes for CDs is that now and then you're assigned a task you like; and you get the disc at the end of it. This morning a box of dizzying delights hit my desk as a result of one such job: a set of reissues from Warners of Andras Schiff playing concertos and chamber music - no fewer than nine discs.

OmG, which to play first?! The Bartok piano concertos with Ivan Fischer and the Budapest Festival Orchestra? Schubert trios with Yuuko Shiokawa and Miklos Perenyi? The Dvorak Piano Quintet with the Panochas? Beethoven, Mozart and the fascinating Sandor Veress... Solution: close eyes, shuffle discs and pick the one at the top. It's the Dvorak. Heaven.

"...Schiff always puts the music first and last. In a world obsessed with superficiality, image, anti-intellectualism and short-term thinking, Schiff continues to stand proudly for the opposite, offering a voice of reason and artistic integrity."

A couple of weeks ago Andras was awarded the Royal Academy of Music Bach Prize. He'll be starting his Beethoven sonatas cycle in the States this October - Ann Arbor, San Francisco, Los Angeles and New York - I've recently done an interview with him about this for Carnegie Hall's Playbill, which I'll post as soon as it's available online. And you can still hear his lectures about the sonatas from the Wigmore Hall on The Guardian's webcast.

Please excuse me while I gloat, worship and purr, all at the same time.
Posted by Jessica at 1:15 pm