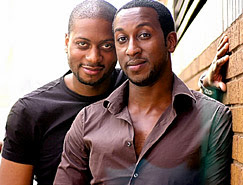 Rodney (left) and Andrew Clarke are centre stage in Carmen Jones at the RFH, which I finally got to see on Saturday. As it happens, these sensational siblings are familiar faces from Glyndebourne - and finally they have their chance to shine in central London.

Rodney, a massively tall and very striking baritone, is perfection as Husky Miller (the character formerly known as Escamillo) and Andrew, a high, romantic tenor brimful with charm, plays Joe (Don J) as a repressed mama's boy whose emotions are wrenched out of him in fits of startling violence. He sings the flower song like a dream (and that goes for the original too, which I know because I accompanied him in it in a charity concert a few years ago!). With the gorgeous Tsakane Valentine Maswanganyi, born in Soweto and now a south Londoner, as slinky as a cat as superbitch Carmen and a charismatic supporting cast, it's a terrific night out.

I admit, though, to being an old stick-in-the-mud and preferring the original Bizet. Maybe it was something to do with the production - set in Cuba, yet forgetting that Cubans don't have deep south American accents (or, in some cases, perfect English choir school enunciation!), and that you can't actually take a train ("clickety clack, clickety clack," says the quintet) from Havana to Chicago because there's sea in the way. Suspension of disbelief was difficult. Besides, I don't see why Andrew and Rodney and the rest of these superb singers should have had to depend on an all-black show to have the opportunity to make their mark in such a big way. Sherry Boone as Cindy Lou is the best Micaela I've heard in years.

If I ran a record company I'd give the Clarke brothers a contract prontissimo.

PS - the Southbank website for Carmen Jones features an article of mine to introduce the musical in the context of other adaptations of Carmen. Gorgeous pic of Rodney, too.
Posted by Jessica at 1:55 pm