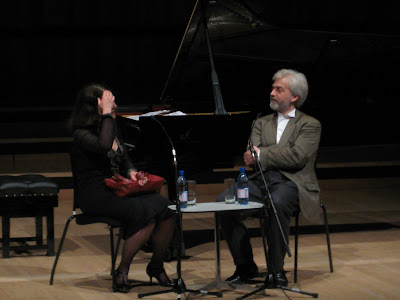 75 minutes before beginning a phenomenally demanding programme, Krystian Zimerman, cool as proverbial cucumber, effected a sudden and unexpected transformation into Dudley Moore. This natural-born stand-up comedian (the sit-down version) within seconds had our very substantial audience in stitches.

It's not quite the same without his impeccable timing, but here's one of the anecdotes. Krystian went to Bonn to have a look at Beethoven's hearing aids. Apparently bones can transmit a range of high frequencies that most of us can't hear, and Beethoven had a special stick that he held between his teeth and placed against the piano, so he could actually 'hear' more frequencies than anyone else can normally register. Krystian decided to try this at home. At 4am his wife went to look for him and found him hunched over the piano wearing a motorbike helmet (to cut out noise), stick in teeth...

For anyone who's curious about the switchover of keyboards, here's how it works. K plays Bach. Applause. K bows and exits stage right, while, stage left, enter piano technician. Technician unscrews something under the piano, takes off the top and puts it down, unslots keyboard in a few seconds and carries it out. Returns with other keyboard, slots it in, replaces top, does up screws, exit stage left to applause, while, stage right, enter K, who goes to piano and begins Op.111. Easy peasy. And it sounds utterly different. It's about overtones and voicing. The overtones for the Bach are glittering and penetrating even when K plays with the lightest of touches. The Beethoven is like switching from etching to oil painting: duskiness, darkness, ethereal nuance like candlelight. And K's range of colours in the Szymanowski Variations has to be heard to be believed: the sort of crescendo from nothing to everything that just when you think it can't go further, promptly does... But as K says, dynamics do not depend on loudness.

Blimey, guv. It was quite a night.

BTW, the pic was taken during the sound-check - the handbag didn't join us for the talk.
Posted by Jessica at 8:45 am