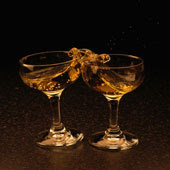 Once again, the Winter Solstice signals that it is time to welcome you to the JDCMB Ginger Stripe Awards!

2008 has been a peculiar year, full of the crunching of credits, the blurring of boundaries and the bouncing of an occasional Czech not to mention a lot of Hungarians. I regret to say that Sir Georg has put his paw down and banned me from presenting musical awards, however much deserved, to Philippe Graffin (who as you know made the CD-of-the-Book), Tasmin Little (who played at my book launch), Andras Schiff (even though today is his birthday! but he kindly endorsed the novel), Vladimir Jurowski (who just kept on and on winning the conductor slot), and several others. When I pointed out that the ban must extend to Feline of the Year, he gave a cat-shrug and said that as he alone can present ginger stripes for stroking, that was "bearly" relevant.

Our Cyberposhplace, being virtual, is still in business. The Canard-Duchen bubbly, being imaginary, flows unabated and our Virtualcelebritychef has made some Hungarian canapes, which are very filling, hence economical. Please help yourselves, but go easy on the garlic sausage... And now let's have a round of applause for every musician who has touched the hearts of his or her audience during the past 12 months.

Thank you...quiet, please. Now, would the following winners please approach the podium where Solti, ensconced upon his silken cushion, will allow you to stroke the ginger stripes and will give you your very own prize purr.

Icon of the year: Vernon Handley, who along with Richard Hickox is among 2008's tragic losses. Our Nods for Tod went sadly unheeded; now it is too late. He and Richard live on, however, in the hearts of their admirers. Please pause for a two-minute silence.

Pianist of the year: Daniel Barenboim for his Beethoven cycle, which mobilised musical London like nothing else in years. I am startled to find that even now, after 10 months, I can remember the way he played almost everything in Op.111 - and suspect I will remember it forever.

Violinist of the year: since Solti has banned me from giving this one to Philippe and/or Tasmin, the prize is divided between Christian Tetzlaff for his Brahms concerto in London and Vienna with the LPO...and that dazzling virtuoso, the utterly gorgeous junior violinist of Taraf de Haidouks.

Singer of the year: the divine Jonas Kaufmann, whose performance at the ROH nearly renamed Puccini's most dramatic opera Cavaradossi.

Youthful artist of the year: Chloe Hanslip, who has grown up from prodigydom to become a really lovely musician. Her CD of Bazzini overflows with joie de vivre. I hope she'll go on to great things.

Conductor of the year: Claudio Abbado, who scooped the JDCMB conductors' poll hands down, so to speak.

Interviewee of the year: the maverick French violinist Devy Erlih, whom I interviewed in July for The Strad (they won't let me put it online until January, so watch this space). His mind-boggling story is the closest I have found in real life to that of Mimi Racz... You can, however, read a special web extra here in which he talks to me about Bach.

CD of the year: Stephen Kovacevich's new recording of the Beethoven Diabelli Variations and Bach 4th Partita. His old disc of the Diabellis on EMI was great, but this one is absolutely breathtaking: musicianship so fiery and profound that it exists on the very edge of bursting its banks. And the Bach - especially the Allemande - found me sinking to the floor and nearly chewing the carpet because I have always dreamed it could sound like this yet had never heard it do so... Enough already - just go and hear it.

Lifetime Achievement Award: Alfred Brendel, who is retiring. Read this beautiful tribute to him from Imogen Cooper in The Guardian; treasure the memories of that deadpan humour in Haydn and Beethoven; and read his book, an Aladdin's cave of musical insight.

Take a bow, everybody...Thank you. Thank you for your moving, uplifting, inspiring, life-enhancing music-making. You're wonderful. We love you.


And a few personal highlights:

Proudest moment: Launch of Hungarian Dances, 4 March. What an evening!

Most affecting moment: Philippe's Hungarian Dances CD becoming real - probably the most touching thing anyone has ever done in association with anything I have tried to do. Saying 'thank you' isn't enough...

Most startling moment: finding myself the foil to Krystian Zimerman's astounding comedy classic at the RFH.

Felines of the year: I am hoping to meet some large stripy creatures (at a safe distance) on a mountainside in India next week. If we give them a prize now, perhaps they will deign to appear.

Personality of the year: my nephew Luca (age 4), who has developed an obsession with different types of weird and wonderful musical instruments and recently announced that he wants to play the 'doodah'. "How cute, a doodah-whatsit" was the general mystified response - before he told us yesterday that actually the duda is a type of bagpipe and he thinks it comes from Hungary... !?!

Wonderful Webmaster of the Year: this essential prize once again goes to Herr Horst Kolo, without whom nothing would be possible.

Thank you, everyone. Now please relax, socialise and enjoy the music...
Posted by Jessica at 10:00 am