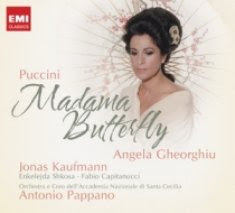 Angela Gheorghiu: the WYSIWYG Diva. My interview with her was the Indy's Arts & Books Review cover feature on Friday - delayed posting here because I've been away. Angela defends her cancellations, tells us how she discovered Jonas Kaufmann and lets us in on a startling family secret.

The interview coincides with the release of her new CD of Madama Butterfly, complete - rare these days to find a complete new studio recording of any opera, of course, but with Gherghiu and Kaufmann in the leading roles and Pappano wielding the baton, EMI must be pretty confident that this one will sell by the gallon. In The Sunday Times Hugh Canning, who heard the sessions, wrote a feature about the recording and the 'making of'. My piece is a portrait of the lady herself. There isn't a JDCMB 'director's cut' version of the article - they printed it in its entirety - but there may be a few choice selections to add, which I will do as soon as I've unpacked. (Update: DONE...)

I like her. I really do. Because what you see IS what you get. There is no sense that she's pretending to be something she's not. Some artists switch off the charm when you switch off the voice recorder. Angela is A1 consistent. I can't say whether or not she really is 'the last diva' since we don't yet know what today's desperately spoiled teenagers will be capable of if they take the stage, but I don't need to tell you that she's the ultimate out there at present.

As for the Butterfly, it is basically gorgeous. Angela seems to get under the skin of Cio-Cio San, first decorous and enunciating delicately as the young girl, then letting rip as the tragedy develops. The utterly fabulous Kaufmann, though, rather overshadows her in the love duet...
Posted by Jessica at 9:13 am