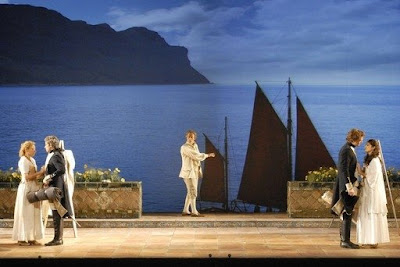 Distressing news from English National Opera of a type that's becoming worrying familiar. The Iranian film director Abbas Kiarostami was supposed to be coming to London to stage his production of Cosi fan tutte, first seen at the Aix-en-Provence Festival last year, for the company. He has just pulled out - due to UK visa trouble. His British associate producer Elaine Tyler-Hall will take over.

ENO tells me this:

* He found the whole process unduly time consuming and hugely complicated.
* He does not feel he was treated in a respectful way.
* He works freely in both France and Italy and doesn't have these problems to get there.
* The Ambassador did try and intervene at the last minute but by this stage Abbas wasn't prepared to pursue the matter any further.

It takes approximately 30 seconds on Google - hardly rocket science - to discover what a distinguished guy this is. Controversial, influential, the most, alive, all the adjectives are there. He's 68. He was a leading figure in the Iranian New Wave movement in cinema of the 1960s. He's directed more than 40 films and won the Palme d'Or in Cannes for Taste of Cherry. Books have been written about him. 'Could there be a more startling, or intriguing, choice of director for Mozart's Cosi fan tutte?' said The Guardian last year.

Opera Chic had pictures of the production last year, along with the information that he has been refused a visa to the USA before now. But imagine if the petty officialdom in visa-land had decided to treat Ingmar Bergman like filth just because he was Swedish.

Kiarostami has commented: 'I would like to thank John Berry and the rest of the crew at ENO for the understanding and support they have shown in this very complicated but delicate situation. They respected my position and my principles in spite of the obvious fact that it was putting them in a very precarious and disagreeable position. I have to confess that this gives me hope; the world is still a livable place malgre tout....'

The UK hasn't been good at keeping out the real hate-monger extremists in the past, but for the visa system to make life or entry to the UK horrible or impossible for great artists, as they increasingly do (see Sokolov incident), let alone leaving them feeling they are treated 'not in a respectful way', is lamentable, inexcusable and makes me more than slightly ashamed of this little island. It's a sorry state of affairs, in which the state is not sorry.

Having so said, the reviews in Aix were not exactly outright raves - far from it. But that's not the point...

UPDATE: More on the story, from The Independent.
Posted by Jessica at 4:46 pm