Extremely sad this morning to hear about the death of Robert Tear, one of the greatest singers and 'characters' in the British opera world over the past half century. He was 72.

I've been listening to Bob singing for as long as I can remember, but certain occasions stand out as utterly unforgettable. His Peter Quint in The Turn of the Screw can scarcely have been bettered: while his presence could emanate sinister power almost effortlessly, the beauty of his voice gave the character its essential extra dimension of seductiveness. At the opposite end of the spectrum, he was in Glyndebourne's Die Fledermaus a few years ago singing Dr Falke the lawyer - a production which included a little coup-de-theatre in the last act when Falke's cloak was pulled off him, abruptly revealing that he was wearing a petticoat. "What's that?" bellowed Eisenstein. The reply: "It's my Freudian slip!" And at the UK premiere of Korngold's Das Wunder der Heliane at the RFH in 2007, Bob sang the short role of the Blind Judge. His was the finest voice on the platform.

It was on that occasion that I met him for the first time. I'd just been in France for the premiere of my play about Messiaen's Quartet for the End of Time; Bob became very interested since he had known Messiaen well and worked with him. He said that he was winding down his singing career (and his last operatic appearance was in Turandot at the ROH two years ago), but was still interested in performing as an actor or reader. The upshot was that he and I gave the UK premiere of the play together at Lake District Summer Music 2008, in the Theatre by the Lake in Keswick. 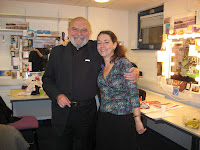 It was astonishing to be on stage with him. The stage is not my natural environment and appearing alongside such a legend is a tall order. But he was such a strong, reassuring, comforting presence - able to inhabit a role so entirely, even when simply reading - that I was able to "lose myself", forget nerves and respond with all I could muster. With his wife, Hilary, and our team of musicians including Charles Owen and Philippe Graffin, we had a ball in the festival, too, huddling together for warmth in Lake District pubs and watching the rain...

Bob was not just a great singer, but a Renaissance man, fascinated by literature, art and issues mystical. His favourite pastime seemed, indeed, to be painting and he also wrote some amazing texts, short stories which I was privileged to read; his poetry also featured in a Christmas carol, 'Winter's Wait', which was performed at King's College Cambridge last year. He was a vivacious and irrepressible dinner guest, regaling us with hilarious stories from his time as a larger-than-life figure in a larger-than-life profession; and his West London home seemed to buzz with the spirits of all the creative powerhouses who had passed through its portals over the years.

I phoned him just before Christmas to ask whether he would be interested in doing another reading of the play this spring. He told me he wasn't taking on any more work of any kind and mentioned that he hadn't been very well, but if this was in fact a serious illness he gave no indication of the fact. My thoughts today are very much with Hilary and their two daughters.

And here is his official biography from his agent's website.

Robert Tear was born and educated in Wales, and became a choral scholar at King's College, Cambridge.  Throughout his career he has shown his versatility and great talent as one of  the world's leading tenors and has worked with many eminent conductors.
He has appeared at the Royal Opera House, Covent Garden, on a regular basis since his debut in l970. In 1988/89 he made his debut with English National Opera in The Turn of the Screw and the following season included his highly successful debut as Aschenbach in Death in Venice with the Glyndebourne Touring Company, later filmed by BBC TV.
Robert Tear has worked on many television projects, including the Jeunesses Musicales’ War Requiem performances in East and West Berlin to celebrate the City's 750th Anniversary in l987,   and more recently, a performance at the Wigmore Hall in which he performed Britten Song Cycles and Out of Winter by Jonathan Dove to Robert’s own texts.

He has made well over 250 records for every major recording company, including Bach Cantatas, numerous recital records, Victorian ballads with his friends Benjamin Luxon and André Previn, Britten's Serenade and Nocturne with Giulini for DG, and all the major choral works. Other recordings include Britten's War Requiem, Mahler's Das Klagende Lied, both with Sir Simon Rattle, Die Winterreise with Philip Ledger, and the first recording of Schoenberg's arrangement of Mahler's Das Lied von der Erde for BMG Records with Mark Wigglesworth and The Premiere Ensemble. His recording of Dyson's The Canterbury Pilgrims with the LSO and Hickox for Chandos was released in 1997.
In 1985 Robert Tear made his US conducting debut in Minneapolis and has subsequently worked with the BBC National Orchestra of Wales, London Mozart Players, Northern Sinfonia, English Chamber Orchestra, Philharmonia, Royal Liverpool Philharmonic, Royal Scottish National Orchestra, Toulouse Chamber Orchestra, Tapiola Sinfonietta and Scottish Chamber Orchestra.
Recent opera performances have included Opera National de Paris Bastille (Marriage of Figaro), Los Angeles Opera (Tales of Hoffmann), the Royal Opera House (Falstaff & The Bartered Bride), Welsh National Opera (Eugene Onegin), Bayerische Staatsoper (Saul), English National Opera (Sir John in Love) and Glyndebourne (Die Fledermaus). In early 2009 Robert made his final singing performance at the Royal Opera House as Altuom in Turandot.
Robert is in increasing demand as a speaker/narrator. He has most recently read a selection of Mozart’s letters accompanied by music at Kings Place, and Stravinksy’s A Soldier’s Tale with members of the London Philharmonic Orchestra at Wigmore Hall.
Robert Tear is married with two daughters and lives in West London. From 1992-94 he was Artistic Director of the Vocal Faculty of the London Royal Schools of Music, and he is currently a visiting professor of Opera at the Royal Academy of Music. He is an Honorary Fellow of King's College, Cambridge, and in l984 was awarded the C.B.E.
Posted by Jessica at 9:33 am