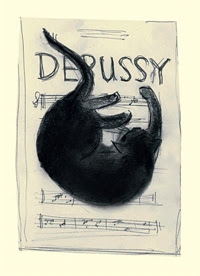 I've just been to see the pianist Noriko Ogawa about her Debussy festival in Manchester in January. Together with the BBC Philharmonic and friends, she is exploring the cross-currents between Debussy and Japan - the influence of oriental culture on the composer and his influence, in return, on Japanese composers of the 20th century and today. Fascinating stuff and I'll be explaining it all at more length soon. But Noriko was in Japan at the time of the earthquake on 11 March - you may have seen her speaking about it from Tokyo on Newsnight - and she has been hard at work fundraising via concerts and other means for the victims of the earthquake and tsunami, which left vast numbers homeless and deprived of their livelihoods. She has had some Black Cat greetings cards specially designed - each one costs £2 and all profits go to the Japan Society Tohoku Earthquake Relief Fund. If you haven't done your Xmas cards yet, here's the purrfect chance. Right, one of the four images. You can buy them online here. Debussy, by the way, used to frequent the club Le Chat Noir in Paris.
Posted by Jessica at 2:21 pm