Gold stars for this silver rose

If you only do one thing in London over the next few weeks, make it this: go and see Der Rosenkavalier at ENO.

The opening night on Saturday...where to start? The dream-team cast? OK, Amanda Roocroft is The Marschallin for the first time - not that you would guess for a moment she had not been born singing this music. Roocroft is one of the finest actresses in British opera right now - look at her awards for all that Janacek. She can effortlessly evoke the charming, open-hearted aristocrat on the one hand, and, lurking just beneath the surface, a self-destructive woman whose fear of losing her beloved young lover leads her to chase him away; act I's conclusion leaves her cradling a cushion in despair. Sarah Connolly is everyone's perfect Octavian: glowing, dashing, her voice as silvery as her armour (and those of us who follow her updates on Facebook were extra-pleased to see her as she'd been stuck on a motionless train with points failure for half the afternoon). 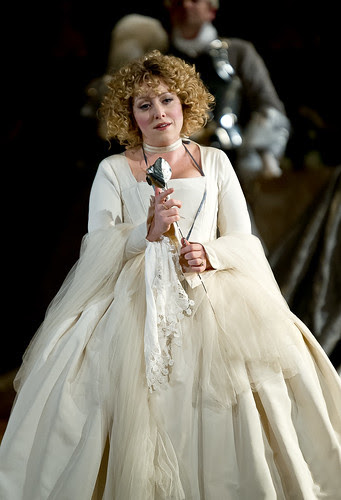 But perhaps most stunning of all was the debut of Sophie Bevan as Sophie (above, pic by Clive Barda). A star is born? You can't argue with the goose-bumps: you can't always explain them, but you know them when they happen. The moment Sophie opened her mouth, it was clear that she is no common-or-garden girl soprano, but one with potential to reach some very special places indeed. At no point while she sang did one have to glance at the surtitles; every word was clear as the proverbial bell, and every twist of character projected with relish. The voice - pure, flexible, snowy and effortlessly voluminous when required - never faltered; and the magical moments following the presentation of the rose as Sophie and Octavian fall in love made us all fall in love too. The audience went mad for her. I can't wait to hear what she does next.

Nor can you argue with John Tomlinson as the odious Ochs. Some of us feel that the opera contains too much Ochs and too little outrage over his ghastliness (the programme notes said that Strauss makes us like Ochs, but actually no, he doesn't) - but 'John Tom' is so convincing that what one remembers is a) the 18th-century setting would have condemned him to the guillotine had Strauss and Hofmannsthal not shifted the action to Vienna instead of Paris, and b) the world premiere, in 1911, took place only six years before the Russian revolution. Rosenkavalier as social commentary for its own time and maybe for ours too... Meanwhile, so involved was the singer with his role that in the scene with the attorney he turned physically scarlet with anger.

David McVicar's direction of a production as opulently golden as its music is typically astute and detailed - probing, questioning and poetic. For instance, why doesn't Octavian dressed as Mariandel slip out of the boudoir to escape Ochs's attentions? Because the mystery doors in the wall are so mysterious that he can't work out how to get them open. And the last gesture of Octavian towards the departing Marie-Therese before turning back to Sophie sparks an idea that we may not have seen the last of that affair after all...while young Mohamed the page boy has a crush of his own to pursue after curtain-down.

Down t'pit, Ed Gardner was working a magic of his own. This was a shimmering, generous, expansive Rosenkavalier - running to 4 hrs 10 mins, it was 25 mins longer than the theatre's estimate - but not a second of it was excessive. The music had room to breathe, grow and smoulder. Super violin solos from leader Janice Graham and some very lovely woodwind playing.

I have only two complaints. First of all, fine though the diction of the singers was, this opera's entire musical world is so bound up with flow of the German language that in English it just sounds all wrong. That's nobody's fault. I imagine the translation could have been more inspiring, but perhaps it would be a losing battle in any case. The other issue is that the set scarcely changes from scene to scene - without differentiation between the Marschallin's olde-worlde palace and the Faninal's new-build house, half the matter of class distinction, which is such an overriding theme, can't help but be somewhat submerged. Still, sets cost money; and, quite honestly, this cast could have performed in concert alone and still convinced us every step of the way.