There can only be one BBC Young Musician of the Year... 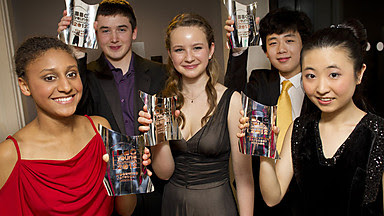 If the BBC YM 2012 contest has left me a tad underwhelmed, that is not the fault of the YMs. Certain other commentators have been applauding the fact that there weren't any screaming audiences and other commodities wheeled out for TV talent shows. But really, the polite, packed, Sage audience aside, the resemblance to The Apprentice was all too obvious.

"...but there can only be one BBC Young Musician of the Year..." Sounds familiar?

Now, look. The Tchaikovsky and Chopin International Competitions manage it. They don't award a first prize if nobody merits it. They sometimes give two silver medals instead of a gold and a silver. Very occasionally they've given a joint gold. Even Dragon's Den lets more than one contestant get an investment. There can be more than one winner; there can be no winner. Someone makes the rules. Perhaps someone can remake them.

And obviously someone already has, because all five section winners of BBCYM used to play a concerto. This time, they had to do a semi-final "play-off". "...but now they must compete against each other!...Two of them will be going home today..." So the final only contained three concertos instead of five, and was...er, shorter.

The trombonist Alexander Kelly and percussionist Hyun-gi Lee had no business being kicked out. They were both fabulous. As purveyors of niche instruments on which a solo career is rare, perhaps they started off at a disadvantage. Occasionally a brass instrument or a percussionist does win BBCYM. Just not very often.

The most daring choice as outright winner would have been Charlotte Barbour-Condini, who made history by being the first recorder player ever to reach the final. Talk about a natural musician: Charlotte has everything - charisma, confidence, tremendous musicality, the bearing and spirit of a mature artist. At least she can reap the benefits now of national TV exposure without the pressures of having won outright; she is apparently just as good at the piano and the violin (!), so she has a little time to choose her direction. Yesterday was her 16th birthday. She will be fine - and will probably remain the most interesting of them all.

Another finalist clearly couldn't wait to get out there and deliver the goods, and was assured enough to perform a (rather engaging) composition of his own in the semis, then, for the big final, the Grieg Piano Concerto, which he seemed to find a piece of cake. I first encountered Yuanfan Yang in 2007 when he was all of ten. He was in the Chetham's International Piano Competition for Young Musicians and he'd already attracted considerable attention. He will be fine, too, no matter what happened yesterday. He'll probably be in the Royal Festival Hall before you can blink.

The 15-year-old cellist Laura Van Der Heijden from Forest Row scooped the award, playing the Walton Cello Concerto. She's lovely, of course: advanced, mature and aware for her age, and that Walton is no small ask. But is she "ready"? When Nicky Benedetti won the prize aged 16, she was "ready" to the point that she'd already been signed up by IMG. Laura has tremendous potential, but it bothers me - through issues such as occasionally insecure intonation - that she may be where she is two years too soon? Time will tell, though, everyone seems to have adored her, and we wish them all the very, very best of luck.

This competition, as Norman Lebrecht has already noted, has failed to ignite attention in the national press. Would it have done so if, instead of being shoe-horned into that Apprentice-like style, it had stayed truer to the nature of its beast within? Then it could have retained, just like a recorder player, its individual niche. But by repositioning itself in too much the vein of other "reality" shows, it's landed itself as a fringe member of a club that doesn't really want to admit it, instead of holding the centre ground of that rare phenomenon, classical music on mainstream TV.

Next time, please, a reconsideration of what BBCYM really is; and of what it is not; and of how it can maximise its power to assist these gifted young people. You can watch the final for the next 6 days here (UK only).