Wisdom in Lucerne, with Bernard Haitink

At Easter I went to Switzerland to listen to Bernard Haitink's conducting masterclasses at the Lucerne Festival Academy. Three intensive days of fascination later, the mystery of the maestro was in no way reduced. If anything, quite the opposite. Never has it been clearer that the sound of an orchestra changes entirely, depending on the person standing up and waving the baton in front of them; it does so immediately; and it is almost impossible to explain it. I talked to Maestro Haitink and some of his students about what the masterclasses mean to them, and found myself learning a few little lessons in the process. My feature about it all is in Radar with today's Independent. Slightly shortened for space, though, so the director's cut is below.

As an exciting footnote, I'm glad to say that the other week I ran into the youngest of the students, Duncan Ward, at the OAE Night Shift concert and he tells me he's been assisting Simon Rattle in Berlin on, among other things, Die Walküre. Watch that space.


WISDOM IN LUCERNE, WITH BERNARD HAITINK

It’s a training experience like no other. Twenty of the world’s brightest young conductors have come to the Lucerne Easter Festival, Switzerland, hoping to be chosen for a masterclass with Bernard Haitink. Of those 20, seven make the final cut. Their task: in front of the veteran Dutch maestro and a fascinated public, they must conduct the Lucerne Festival Orchestra.

There, though, any resemblance to The Apprentice ends. This is not a competition and it’s anything but cut-throat. All 20 youngsters, selected from 150 applicants, listen to the course;  they all have a chance to conduct, not just the final seven. It is like Hogwarts for conductors, with Haitink, a legend in his own lifetime, serving as benevolent Dumbledore to the lot. 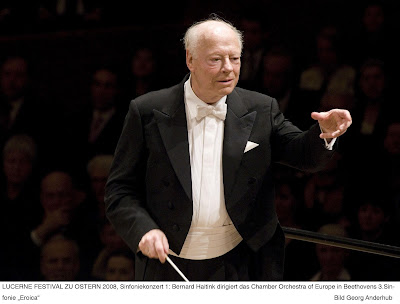 “I supervise them, give them my ideas and see if it suits them and if it helps them,” Haitink, 83, remarks with characteristic self-deprecation. “I can’t work miracles. But there are so many wrong ideas about this profession that it doesn’t do any harm when a conductor who has a certain amount of experience tries to share it with younger people. It takes an enormous amount of energy, but I enjoy it.”

Would-be conductors are at a disadvantage compared to instrumentalists: they can’t practise easily because their instrument consists of 50-80 highly trained humans. That gives this course extra value even before Haitink has said a word. “The chance to work with an orchestra like this one is something we don’t normally have as students,” says Antonio Mendez, one of the final seven; he hails from Spain and is studying in Germany. “To do Bruckner’s Seventh Symphony with the Lucerne Festival Orchestra is really a rare thing.” (Since Easter, Antonio has won second prize in a major conducting competition in Denmark)

Each participant has prepared four set works: Beethoven’s ‘Eroica’ Symphony, Schumann’s Manfred Overture, the first movement of Bruckner’s Symphony No.7 and Ravel’s Mother Goose Suite. The chosen seven each have half an hour per day to strut their stuff.

“Some teachers might try to make everyone do things the same way that they do,” says Gad Kadosh, a French-Israeli conductor currently working as a vocal coach at the Theater für Niedersachsen, Hildesheim. “But Maestro Haitink works with each of us as an individual, trying to bring out the best in everyone.” Haitink’s techniques certainly keep the youngsters on their toes. 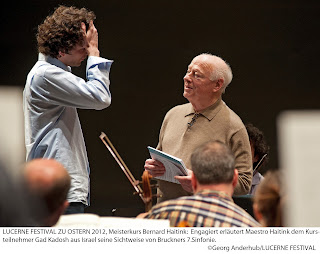 Usually (to generalise) a conductor gives the beat with his/her right hand, using the left to aid direction and amplify expression. Having decided that Anton Torbeev is using his left hand to excess, Haitink grabs his wrist in mid flow: the Russian student must finish the piece with his right hand alone. [Do have a look at Anton's blog.] Then, with Kadosh, Haitink does the opposite, asking him to conduct only with his left; the result sounds marvellous, apparently to Kadosh’s own surprise [photo, right].

Another student is startled when Haitink removes the score from under his nose halfway through a piece: he must continue from memory. “I could see that you know it,” Haitink explains afterwards. “Looking at the score was distracting you. Have confidence!”

In the most common traps, the practicality of Haitink’s advice proves its worth. “Not so holy,” he says, stopping a student after a few phrases of Bruckner. The massive Seventh Symphony’s opening inspires too much reverence; if the tempi slouch, the energy will soon flag. Haitink gently encourages him to think less of the heavens and more of the mountains. He takes the baton and demonstrates: at once the sound changes, the music becoming supple and vivid. “It’s a long symphony,” he points out. “Don’t make the brass play full out even more than they are – they will be exhausted halfway through.” 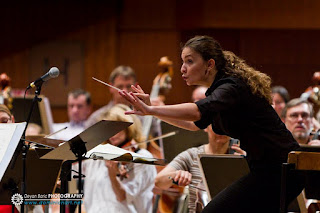 Then there’s a recurrent question about focusing the movements. “Don’t move so much,” Haitink exhorts a student whose flailing limbs are not helping the orchestra: a particular flute entry is late every time. “Concentrate the energy.” He demonstrates – and with one flick of one finger of Haitink’s left hand, the flute is spot on.

Isn’t it alarming to feel Haitink’s eye upon your every move? “Not at all,” declares Zoi Tsokanou from Greece, the only girl in the top seven [photo, above right]. “His energy is all about ‘Let’s make lovely music’. He gives us a lot of trust and a lot of love – there’s no need to be afraid.” Her animation and assurance in the Schumann overture inspire the orchestra into giving her a spontaneous round of applause. 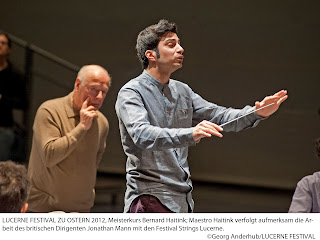 JonathanMann, from the UK [photo, left], says that the course has been “one of the most exciting experiences of my life so far”. He has already started his own orchestra, the Cardiff Sinfonietta. What does he feel he’s learning here? “Maestro Haitink mentioned that sometimes the simple things are the hardest to do,” he says. “Holding a pause a little longer or getting a really quiet sound from the orchestra – those tiny things can make the difference between a good performance and a great one.”

Another youthful Brit, Duncan Ward, is in the final 20 and is asked to run through the Schumann one afternoon. Having studied with (among others) Ravi Shankar in California, Ward especially enjoys Haitink’s anecdotes about the great conductors of the past, such as Bruno Walter and Willem Mengelberg: “The Indian tradition passes everything down aurally from guru to pupil,” he points out. “This is a little similar – the sense of a contact point with those great figures is fabulous.”

The course is short, but its effects long-lasting. “We will always have Maestro Haitink’s comments with us,” says Gad Kadosh. “There is so much to think about that we won’t be able to integrate everything fully right away; maybe not in a year, maybe not even in ten years. But I think that much later these ideas will pop back to us and maybe the next level of learning will happen.”

The conductor’s art is not exactly demystified by listening to Haitink teaching. “Every conductor gets a completely different sound from an orchestra,” says Antonio Mendez. “It’s something you just can’t explain.” And it’s completely true, hearing the transformation of the sound from student to student. Nobody could come out of this audience believing that a conductor just waves his arms about.

Life lessons are here, too: concentrate energy on the essentials, rather than expending it on diffuse peripheries, and maybe the rest follows. This class isn’t just about conducting. This is the getting of wisdom.

Bernard Haitink returns to the Lucerne Festival with the Vienna Philharmonic on 14 and 15 September. More details: http://www.lucernefestival.ch/en/