Songs of names, in Berlin 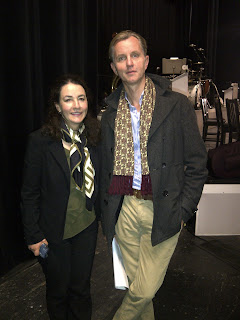 Meet Max Raabe, German 1920s superstar. Only he's not. He's here right now. The singer has spent his entire career steeped in the soundworld of the Roaring Twenties and the less roaring, but more complex and nuanced early Thirties, from America, Germany and more: Irving Berlin, Cole Porter, the Comedian Harmonists...

He's long been a luminary at home, but now his fame seems about to spread. Riding the crest of the "vintage revival" wave, while London theatres are foot-tapping to the irresistible strains of Singin' in the Rain, Top Hat and Cabaret, Raabe has been taken up by Decca and we can expect an album from him in the new year. On Tuesday I went to Berlin to check him out.

I love this stuff. It's not as distant as you might think. My late father-in-law - who was lucky to escape Berlin in 1936 by being sent to school in Britain - was a passionate fan of the Comedian Harmonists as a boy. When we took him some CDs of them about ten years ago, he hadn't heard them since the Thirties, but, aged over 80, he still remembered all the words. And then there was my own supposed/distant/fabled Famous Relative in New York, Eddie Duchin, a band leader and celebrity in that era, who has always fascinated me for obvious reasons. Today the dance music of the Jazz Age is difficult to classify - but it occupies a niche of its own. Either you love it or you don't, and it so happens that I do. 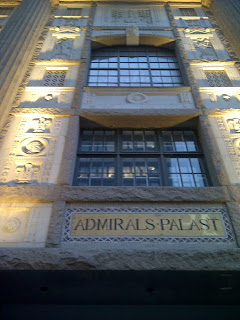 With his 14-piece band, the Palast Orchester, Max Raabe is playing for a week at one of the more extraordinary theatres I've encountered. The Admiralspalast Theater, on Friedrichstrasse, is among very few venues in the German capital that survived World War II and the communist era more or less intact. It's an Art Deco gem - originally opened as a bath house around the turn of the century, it morphed into a "pleasure palace" and an ice-rink before settling into theatre-dom in the Twenties following a sleek refit. The plush red and gold detail of the interior was added in the Thirties (with all that that implies) and walking in today one can scarcely help imagining the officials who might once have been there to check out the Comedian Harmonists - Germany's most successful popular group of the time, three of whose six members were Jewish and who were therefore forced to disband in 1933. 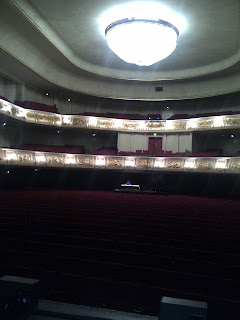 Raabe told me before the performance that his grandmother used to attend shows there as a young girl. He has been drawn to this style of performance since the word go. At the age of 12, he says, "I used to put on my father's top hat and perform songs like this..." Growing up in the Westphalian countryside, he dreamed of moving to Berlin and becoming a performer, so duly enrolled to study there as an opera singer. But along the way, he and some friends got together to form a 1920s-style band for fun, to entertain at student balls. They found themselves in demand. He's never looked back.

Perhaps this is Historically Informed Performance meets the Twenties: many of Raabe's songs are transcribed note by note and instrument by instrument from the recordings of the time. "We now have more than 500 to choose from," he declares. And they're certainly varied, ranging from 'Singin' in the Rain' itself, in English, to a delicious Cuban Rumba, to a French number or two and the Comedian Harmonists' big hit, 'Mein kleine, gruene Cactus', which got the strongest cheer of the evening. It's a little difficult to sit still in a theatre and listen to it all, because if your feet are anything like mine, they'd like to take a turn around the non-existent dancefloor. 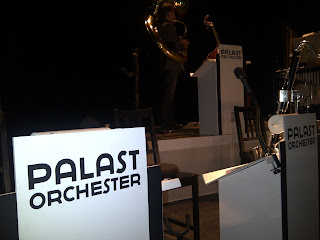 The Palast Orchester, full of spirited and amazingly versatile musicians, does all the tricks of the time: coordinated standing and swooping, switching from instrument to instrument (sousaphone to string bass, sax to clarinet, and, more unusually, trumpet to violin). For one song with a naval theme, two of the trumpeters brought in a basin of water and blew a bubbly refrain or two through it. (Left: the sousaphone player warms up before the show...)

The style is slick, light, elegant, rhythmic. There is no soup. Wit and whimsy are uppermost; and even in the more romantic numbers, there's a careful balance between irony and a sincere heart. But there are a few nice little updatings: the use of projected images from time to time so that we can see the musicians in close-up; and a specially made Muppet-style figure who crosses the projection now and then, just enough to raise a gentle laugh. 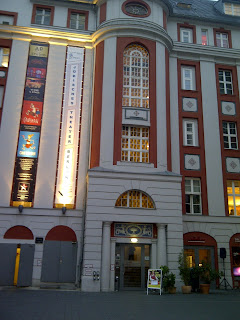 And, speaking of updating, Raabe writes his own material as well, in style. "I want to capture the same kind of wit and elegance you find in the songs of that era," he says - indeed, his nonchalant presentation style, unfussed and very smooth, takes its cue from the world of Cole Porter himself. His opening song on Tuesday was one of his own: it describes a party at which every celebrity you can think of is present, including Karl Lagerfeld and Lars von Trier, but our protagonist is "only here for you...". Past style meets present-day preoccupation in a sort of musical Heston Blumenthal of unlikely yet excellent flavour.

But in performing the songs of the era, it's all about credit where credit is due, and Raabe always introduces the number with the names of its composer and lyricist. "When the Nazis came to power in 1933, the music did not disappear," he says, "but the names did. Great names, like Friedrich Hollaender, who worked with Max Reinhardt..." Hollaender composed, among other things, the music for Die blaue Engel, starring Marlene Dietrich. He was, of course, forced to escape Germany and made his way to Hollywood. "There were so many fantastic composers and writers whose names had to disappear. We always say the names."

Is this Raabe's song of names, then? (pace Norman Lebrecht). Is he restoring the lost world of these refugee songwriters, bringing them home at last to the land that betrayed them? Is it all part of the ongoing, protracted healing process - present, but always painful - that you see all around you in Berlin? It's tempting to think so. But Raabe just smiles and says: "I think that would be oversignificant. We are just here to entertain."

I think he is doing a little more than that. Who knows, maybe that's one reason he's going global.