Yesterday morning I was still so high on the aftermath of the Calleja concert that I forgot to check the Independent for my own work. They ran my piece about Silent Opera, the go-ahead young company that is determined to bring opera to the iPod generation and is busy doing just that with a brand-new version of Monteverdi's L'Orfeo.

Why shouldn't this work receive radical treatment? It is radical: it was pretty much the first opera ever written. And incidentally, if opera is Gesamtkunstwerk, just imagine what could have happened if Wagner had had a computer.

A short version of the article was printed, and below is the director's cut. Get yourself over to Trinity Buoy Wharf and try a 21st-century route to JD's favourite Green Mountain.

First, here's a video about what they do...


We’re in uncharted territory, staring at a crystal ball. This glass globe adorns a table at Trinity Buoy Wharf  – the Docklands river peninsula devoted to the arts and creative industries where anything can happen and often does. But am I really looking into the future of opera?

The team behind Silent Opera thinks so. This young company, spearheaded by artistic director Daisy Evans, has made it its mission to bring an art form often misunderstood as stuffy and inaccessible to the cutting edge of adventurous, technologically-enhanced theatre. Later this month they open a new production of Monteverdi’s L’Orfeo in a converted warehouse.

“Silent” in this context means “digital”. Taking their cue from theatre companies like Punchdrunk and dreamthinkspeak, they aim to create a brand-new, individual and completely immersive experience out of opera, combining technological potential with live performance. “The opera world will never look back,” declares the mission statement. 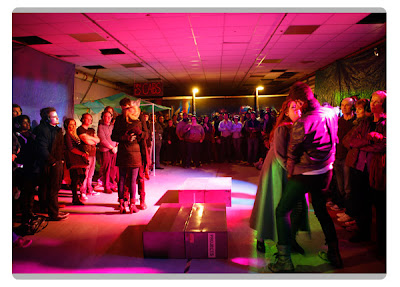 Isn’t it rather a grandiose claim? Think “opera” and you probably imagine a plush seat, a dark theatre, a stage many metres away and exorbitantly priced gin and tonic. Here none of those apply, according to Tim Wilson, Silent Opera’s executive producer. “Opera used to be the big thing, didn’t it?” he says. “Today, why is it not? Because it’s behind a wall. But turn it into zeros and ones and you can send it down a fibreoptic cable. Then the sky is the limit.”

Buy a ticket for L’Orfeo – an operatic snip at £25, or £35 to attend performances featuring arrival by a chartered boat – and your experience begins when you are handed a pair of wireless earphones at the door. At once, you’re in Orfeo’s world. You don’t have to wear the headphones if you want only to hear the live performance taking place around you: the choice is yours at all times. And the performance is around you, not in front of you: in this intimate setting, the singers will be no more than five metres away, and you may find yourself being directly addressed when not being shepherded through a sonic tunnel to hell and back.

The live performance is fed into the headphones and mixed with a pre-recorded soundtrack. The composer Louis d’Heudieres has produced a soundscape in which Monteverdi is filtered through his imagination and also our own: an ambient world including everything from the rest of Monteverdi’s orchestration to suggested spoken thoughts and sampled sounds from the music and elsewhere – plus a whole new ending.

Each night, one unsuspecting member of the audience will receive a “golden ticket”, which bestows the right to choose which ending the company should perform: Monteverdi’s or d’Heudieres’. The performers won’t know in advance. In the 17th-century opera, the demigod Orpheus is forgiven for his failure when trying to lead his beloved Euridice out of hell and is allowed to live as god. But the new ambient ending goes back to the original myth: Orpheus is torn to pieces by the Furies.

“It’s a very immediate way of experiencing the story,” says Silent Opera’s artistic director, Daisy Evans. “It grabs you and makes you part of it.” Evans, in her mid-twenties, has been cutting her directorial teeth with English National Opera and Glyndebourne, where she was an assistant director for Wagner’s Die Meistersinger von Nürnberg in 2011, and has won crucial support for her Silent Opera project from Sky Arts Ignition: Futures Fund and Blitz Communications. The company’s first production, Purcell’s Dido and Aeneas, quickly showed that an appetite exists for a radical rethink of what opera can be in the 21st century. Now it seems that the only way is up.

The proof is in the ticket sales. When Silent Opera staged La Bohème last year in the Vault Festival underneath Waterloo Station, they sold around 3000 tickets without producing any printed material to advertise the event. “Everything happened online,” says Wilson. “Every one of our shows sold out.” Sixty per cent of the audience, he adds, were under 30. Fifty per cent had never attended a live classical music performance before.

L’Orfeo is the first production in Silent Opera’s ongoing project to perform all of Monteverdi’s three great stage works. It is an ideal choice for this treatment, not least because it is inherently edgy, being one of the first operas ever written. The composer unveiled it at the court of the Gonzagas in Mantua in 1607. Additionally, it was intended for a performance space that in no way resembled today’s vast opera houses, where sometimes you can feel you need a telescope to see the action.

Experiencing live operatic performance at close quarters is both true to Monteverdi’s vision and also a rare treat for audience and performers. “You can change the emotions in a few seconds, because you can ‘read’ them so much more easily when you’re close to people,” says Evans. “The audience will be a huge part of this concept and no two performances will be the same.”

And for those who might protest that opera with headphones, pre-recorded elements, extra noises and a warehouse setting isn’t opera at all, Wilson has a simple message: “Bullshit! If people are so monolithic about an art form, no wonder it has been backed into a corner. Here it’s coming out fighting.”

“It’s about the iPod generation,” says Evans. “We all have an entire orchestra in our pockets a lot of the time. You can sit on the Tube and listen to Stravinsky or Wagner, yet a lot of people wouldn’t necessarily think ‘I’m enjoying that, I’ll go and listen to it live’. Either they don’t make that jump for financial reasons, or it’s not there for them to attend. We’re shifting this concept into the performance sphere.”

But the company insists there is no compromise on standards: with a project like this, the musical and dramatic end result has to be top notch to justify the experimental means. “We’re pitching well above our age and experience in terms of the singers and musicians with whom we’re working,” Wilson admits.

And why ever not? Opera, according to Wagner, was the complete art form (Gesamtkunstwerk) in which music, drama, design and more joined forces to provide an all-encompassing artistic experience. Of course, neither he nor Monteverdi had computer technology. Imagine what might have happened if they had. In today’s world, there’s no excuse for leaving such art-enhancing capabilities to one side any longer. “Where technology will be in five years time we don’t know,” says Wilson. “But wherever it is, we’ll bloody well be there.”