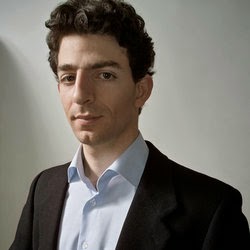 This is the space to watch that I mentioned yesterday...

Percius, the artists' management company headed by John Willan, has signed up Gad Kadosh, a young French-Israeli conductor with whom I was much impressed at Bernard Haitink's Lucerne masterclasses a couple of years ago and who was also in that sought-after selection for the Gustav Mahler Conducting Competition this year. I'm told we can look forward to his UK debut in 2015.

Gad Kadosh is a young, intensely engaging Israeli conductor with a keen musical mind. Currently working as second Kapellmeister and assistant conductor at Theater Heidelberg, Gad received the first prize in the MDR Conducting Competition (MDR Symphony Orchestra, Leipzig), in 2011. He was then selected by Bernard Haitink as one of seven candidates to take part in his 2012 Conducting Masterclass in Lucerne with the Lucerne Festival Strings.
Journalist Jessica Duchen writes: “I first encountered Gad Kadosh at Bernard Haitink’s Lucerne Festival Academy masterclasses and was immediately impressed with his sensitivity, intelligence and intense musicality. When he took the podium the music seemed to flow naturally out of the orchestra; he allowed the piece to speak for itself. I hope we will hear a lot more of him in the future.”
Gad studied piano performance at the Buchmann-Mehta School of Music in Tel-Aviv University and was awarded scholarships from the America-Israel Cultural Foundation. He went on to study conducting with Vag Papian in Israel, Lutz Köhler in Berlin and Martin Hoff in Weimar. Prior to his position in Heidelberg Gad worked as Solorepetitor and Assistant Conductor at the Theater für Niedersachsen in Hildesheim.
In Heidelberg and at Winterthur he has conducted Tosca (Puccini) and Die Fledemaus (Strauss), and in Hildesheim works such as Don Pasquale (Donizetti), Eugene Onegin (Tchaikovsky), Das Land des Lächelns (Lehár) and Ein Walzertraum (Oscar Straus). Whilst Classical and Romantic repertoire form the core of his current oeuvre Gad has worked with young composers and conducted contemporary repertoire; he has directed ensembles such as Klangzeitort and Zafraan in Berlin, and conducted Miss Donnithorne’s Maggot (Maxwell Davies) and Arlecchino (Ferruccio Busoni).
Future appearances include performances of Cosi fan Tutte (Mozart), Die Fledermaus (Strauss), Rumor (Christian Jost), Babar, der kleine Elephant (Poulenc), Ifigenia in Tauride (Traetta), Un ballo in maschera (Verdi) and his debut at Longborough Festival Opera in 2015.