Yesterday I mentioned that the Royal Opera's new Parsifal, directed by Stephen Langridge, seemed rather a curate's egg as cooked by Heston Blumenthal. But the more one thinks about it, the deeper it goes. What follows contains spoilers aplenty, so if you don't want to know the results, look away now.

Langridge's concept is startling, thought-provoking and at times extremely disturbing. It is a very contemporary interpretation, some of which works, some of which doesn't, and some of which seems better after you've had 36+ hours to digest it.

First of all, take the giant cube that occupies the centre of the stage. The first impression is that this is infelicitous design - it resembles a set of Portaloos, or alternatively an outsized SAD lamp (goodness knows our knights need one). More to the point, the hammy gestured flashbacks enacted within it (see image below) are unnecessary distractions and add little of discernible value to the whole, while making it necessary for the real action to take place on the peripheries of the stage.

But wait. Our friend Pliable at Overgrown Path has pointed out that the cube has resonances from Islam. There's another image here... The set design, furthermore, places the holy spring at the back of the stage in a rectangular tub bearing no small resemblance to a mosque's howz for ritual purification. 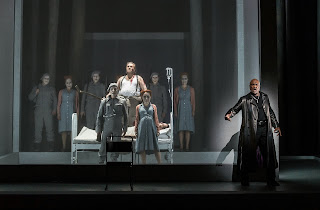 So are these Grail Knights a kind of Wagnerian Al Qaida? As they send four initiates out into the world in woolly hats, armed with pistols, at the end of the Grail ceremony, it seems not entirely impossible. What's certain is that at the heart of this ceremony lies something dark and desperate. At its outset, in a ritual motion, the knights take knives and spear their own hands.

The ailing Amfortas, bound to the cult/temple/whatever-it-is by his father's demand, doesn't want to carry out the Grail ceremony and begs not to have to do it. The question, though, is always why? Isn't lifting the Holy Grail a beautiful thing to do? Not here - because the Grail is a young boy, and Amfortas has to slash his stomach. No wonder he doesn't want to do it. The boy then passes out and is carried in a classic pieta tableau around the knights, who reach out towards him. But when he comes round, he sits on a bench wrapped in a sheet, ignored and alone, apparently no longer of any significance. Parsifal alone rushes to sit beside him; a look passes between them. This also makes sense - for what inspires human compassion as much as a child abandoned, wounded and suffering? It's the discovery of compassion that transforms the 'Pure Fool'.

The question "why?" appears to be a powerful driving force. Why is Kundry going to such lengths to cure Amfortas when she was responsible for his initial downfall? Simple: she loves him. He loves her too, but his terrible wound has come between them. And at the end, Amfortas cured, Kundry redeemed, they walk off hand in hand, away from the cult/temple/whatever-it-is to live happily ever after. Parsifal has saved Amfortas so that he can live and love and be a whole man. Parsifal opens the Grail shrine to find that the Grail - who was there earlier, a bit older than he was in Act I - has disappeared. Parsifal follows suit, walking away and exiting at the back. Job done. True Grail revealed: it is human love. 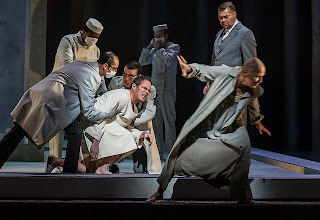 At least, I think that is what's going on. It could perhaps use a little more clarification. I may have got it completely wrong, but it's been a process of elimination: if that isn't what's happening, then what is? Pass.

The single biggest problem with the notion - which is beautiful in itself - is that while it can, with some effort, be extrapolated from Wagner's original meanings (insofar as any of us really understand them), it doesn't dovetail easily with other issues, notably that of Kundry. An astonishing character, the constantly reincarnated female version of the Wandering Jew mingled with Mary Magdalene and Venus, Kundry is released from her curse by Parsifal: not only the curse of tearlessness, but that of deathlessness. Usually she finds her rest at the opera's conclusion. Here, she may find true love, but the effect is still to diminish her significance.

Since seeing the performance I've been looking at the Royal Opera House's reactions page and found a fascinating post interpreting the production via profoundly Christian symbolism and the eucharistic litury. Scroll down and read; it's the one by Richard Davey. It makes a huge amount of sense and is wholly different from my take. Perhaps this Parsifal will be "read" in a unique and personal way by everyone who experiences it - rather like those psychological tests where you see images in an ink blot that reflect your own mind. Then it becomes fascinating on a whole new level.

So, the performances. Gerald Finley stole the show as Amfortas, in no uncertain terms. Heartbreaking, all-encompassing, impassioned, incandescent, desperately moving. Rene Pape's Gurnemanz is a true classic, but at this performance he seemed short of his best; and Angela Denoke's much-praised Kundry unfortunately went somewhat off the rails in Act II, losing control of intonation and struggling for the high notes. She was absolutely fine in Act III, but we spent part of the interval wondering whether an understudy might have to sing from a wing. Simon O'Neill's Parsifal grew from harsh-toned callow youth in Act I, breaking his own bow on realising his guilt at killing the swan, to steely, determined redeemer with voice to match. Willard White smouldered as Klingsor - the first time one might wish for an evil magician to have a bit more to do. Chorus and orchestra were on blistering form, with Tony Pappano leading an account that was sumptuously coloured, full of tension and concentrated beauty.