Farewell to a wonderful clarinettist 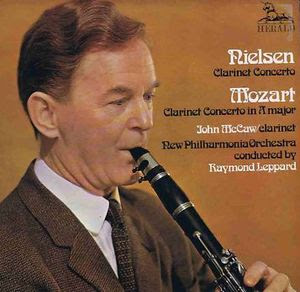 The clarinettist John McCaw, always known personally as Jack, has died at the age of 96. He lived opposite us.

We had no idea, when we moved to our house back in the last century, that he was there. Virtually every clarinettist I've come across since then had at some point been to our street for lessons with him. He was principal clarinet successively of the Philharmonia and of the London Philharmonic, many years ago (and would always watch with much amusement as Tom zoomed out of our front door with instrument case and raincoat to catch the train to Glyndebourne). He was well known as a soloist, and made the recording above of the Nielsen and Mozart concertos with the New Philharmonia and Raymond Leppard in, I believe, a single day.

He can be heard in innumerable recordings, including, if I remember rightly, the Elgar Cello Concerto with du Pré, Barenboim and the LPO (1967), the Nielsen Symphony No.5 conducted by Jascha Horenstein and apparently with Placido Domingo singing 'La vita e inferno' from La forza del destino. In 1977 he played the Mozart Concerto at the Proms with the Philharmonia under Riccardo Muti. He also championed the works of Joseph Holbrooke.

Jack was born in New Zealand at the very end of the First World War and came to live in the UK a few years after the end of the Second, when he was about 30. He and his wife, Ann, a pianist, had lived in their house for more than 50 years.

He was a vivid, sparky character with an unfailing wit, a great deal of charm and, we hear, little patience for nonsense from conductors. He was meticulous, house-proud and a keen gardener. Even when he was over 90 we would see him on a step-ladder with an electric saw, trimming his hedge into a perfect oblong.

For friends and former pupils wishing to attend his funeral, I am told that it will be at Mortlake Crematorium on Tuesday 28 July at 4pm.

We will miss him very, very much.
Posted by Jessica at 7:25 am