Return to the magic mountains 1: Manon Lescaut in Munich

You may think you're on holiday. It depends, though, what you mean by "holiday". I've been away for two and a half weeks, but this time has been brimming over with music, serendipity and a good few marvels of both. Every day has brought something new, a character from past or present, a startling contact or renewal, a joy or amazement, a revelation or insight or several, and I may need to take them one at a time...

I headed first for Munich and the Bavarian State Opera, steamy in the midst of a massive heat wave; here the final night of the annual Opera Festival brought Jonas Kaufmann and Kristine Opolais together again for Puccini's Manon Lescaut, relayed to the city on big screens and webcast to the world. This was the production by Hans Neuenfels that at the start of the season saw Anna Netrebko drop her participation, citing "artistic differences".


It's a bit of a mixed bag. The relationship of Manon and Des Grieux and its development is by far the most convincing element, and so it should be; the final act, the two of them in extremis, is a searing tragedy, full of struggle - Manon's passion fighting against the invasion of death, thumping the ground to bring back her despairing lover to her side. Opolais blossomed vocally and dramatically in the role to an even greater extent, perhaps, than she did at Covent Garden last year; Kaufmann simply soared along at the summit. Fine singing throughout in the supporting roles and chorus - but I am not sure I will ever get my head around the necessity for this chorus to wiggle about in fat-suits and pink wigs. Alain Altinoglu's conducting too brought patchy results: the opening tempo felt extremely fast, and some of the accompaniment was too loud, but often - not least in the intermezzo - it held a gorgeous eloquence.

Here Neuenfels, Altinoglu, Opolais and Kaufmann explore and explain the concept and the challenges of the opera.

A few days later, discussing the issue of the fat-suits and other potentially dubious details with friends who loved the production, I tried to see it their way: it shows Manon and Des Grieux defying convention, a pair of individualists in a world in which everyone else looks and behaves the same (except, presumably, for the Dancing Master, who turns up bearing some resemblance to an orang-utan, perhaps a refugee from Munich's old Rigoletto production set on the Planet of the Apes). As the introductory film declares, Manon and Des Grieux are seeing the world around them as nothing more than a preposterous installation compared to their love. Yet Jonathan Kent's production at Covent Garden last year spoke far more to me of the darker truths of this story in an incarnation for today's world, where it remains the most "relevant" opera of them all.

So what's the essential problem with Manon Lescaut? It could just be that the original book is a short, terse, taut, action-packed, 18th-century thriller. It shows us Des Grieux torn apart by his passion for a girl who wants to have her cake and eat it and whose charm makes her attractive, but who is more anti-heroine than sympathetic lead. Romanticising her never quite works, and that is not the fault of Puccini, nor of any director: it's simply that Abbé Prévost's novel is too finely wrought to allow such a metamorphosis. Maybe that is why this opera, which blossoms with phenomenal music from start to finish, still does not have quite the same currency on the stage as Madame Butterfly or La Bohème. If any director has found a way to make the drama work 200 per cent, I haven't yet seen it.

More on the joys (?) of Regietheater shortly - from Bayreuth.

But even with all these reservations, it was a tremendous performance and an unforgettable evening. Oh, and if you'd managed to get backstage at the Staatsoper that night and you had this photo, you'd put it on your blog too. 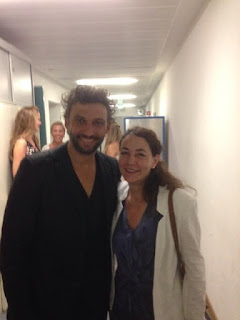