Celebrating 'The Other Classical Musics'

A remarkable book landed on my desk recently - and if anyone is looking for a rapid Christmas present for a music lover, I can't recommend it highly enough. 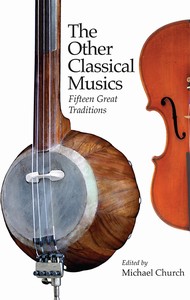 Edited by Michael Church - for whom it has clearly been a lengthy task and an absolute labour of love - it is entitled The Other Classical Musics: Fifteen Great Traditions. Here western classical music emerges as just one of many: no more and no less than one possible option, a richly rewarding and individualistic approach to the art of sound, manifesting itself through the philosophies and social ecosystems of western Europe. This is not, however, world music for dummies. Every topic is treated with deep, considered and well-expressed exploration of history, society and musical analysis. It will suit academics and the general, intelligent reader alike.

Western musicians (to generalise, of course) can be broadly under-aware of other great worldwide traditions of music - maybe because we're so busy perfecting our own that it can be difficult to find the way out of our tunnel and, indeed, to know where to start.

As a student I used to go with my violinist duo partner (who lived in Kingsbury) to Brent Town Hall to hear Indian classical music. Often we'd be among a tiny sprinkling of European faces in the packed-out audience. And my goodness, we heard some marvels - not least, we were transfixed by Zakir Hussain, who was about 21 at the time. We also went rushing to hear the Peking Opera whenever they performed in London, with their breathtaking acrobatics and the acidic magic of their narrative music. I also spent a week at the Dartington International Summer School interspersing piano masterclasses with doing the gamelan class every morning; the more you are drawn into that collaborative, clangorous, vibrant flow, the odder distant Mozart would sound when you walked back past the other studios afterwards. Yes, we were seduced by apparent exoticism, but also we became aware of just how much we didn't know and weren't otherwise learning. My duo partner ended up becoming an ethnomusicologist and finally abandoned his violin for the Chinese erhu.

If only we'd had this book to help us in, I might have considered following his lead. On one level this weighty, beautifully produced and often almost surprisingly readable volume is a history of world societies seen through their musical traditions. On another, it's an extremely useful introduction to, and exploration of, numerous traditions - most centuries long, some longer still. Even if we are mesmerised by the sound of music from other traditions, we might derive still more pleasure and interest from it if we know the context it springs from and how, technically, it works.

Given the vital nature of the influence on the great western composers of traditions from, for example, the Far East, India and Africa, this exploration can bring much insight to those steeped in what we think of as classical music. Debussy and Messiaen might have been the first to applaud; Ligeti, who was influenced by the metric principals of Congolese drumming, would do so too.

As Church tells us, "This is not a comparative study, but it does allow comparisons to be drawn." Much of the book is devoted to the music of the far and near east, with two chapters apiece for China and India; the Mediterranean offers rich pickings with a fascinating exploration of the Andalusian music of the western Med area and one ranging through a Turkey that 18th-century Vienna might find it hard to recognise. The aural traditions of the west African regions that comprise Mande Jaliyaa are unpicked and beautifully evoked by Roderic Knight; Church and Terry E Miller whirl us through the contexts, splendours and technical bedazzlement of Chinese Opera; and the regions of south-east Asia are described in the Javanese chapter with an analysis of the local gamelan (Neil Sorrel). North America, meanwhile, is represented by a chapter on jazz.

That is just a taster of a sackful of riches. What this book can do is ultimately to offer a deeper, richer understanding of the nature of music itself and its significance to human beings the world over. As such, it could be transformative.

The Other Classical Musics is published by the Boydell Press, £25 hardback.