Angels and demons in South Kensington

One of the most enjoyable commissions I had last year was a set of programme notes for the pianist Angelo Villani's debut CD. It's a breathtaking musical journey through Dante's Inferno, featuring some of the characters the poet encounters in his exploration of hell: Tristan, Isolde and Dido are all there, even Franz Liszt (well, in a way). 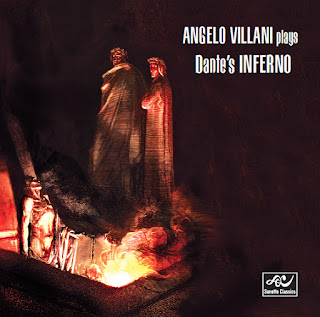 Among the pieces are Angelo's own transcriptions of music from Wagner's Tristan and of Dido's Lament by Purcell, along with an extract from Liszt's Années de pélérinage and an exquisite, little-known piece by Hans von Bülow. The lynchpin of the disc is, of course, Liszt's Dante Sonata.

The CD is now ready for release by Sonetto Classics and Angelo will launch it at the salon of 49 Queen's Gate Terrace, South Kensington, London SW7 5PN, on 4 February. Tickets for the event (£20 including wine & canapés) are on sale and may be reserved by contacting Veronica Davies at vernon@vef.org.uk.

Here's a taster of the interview I did with Angelo about the repertoire for the CD booklet.


The other rarity is a piece from Liszt’s Années de Pélérinage (Years of Pilgrimage): ‘Sunt lacrymae rerum’ (‘There are tears for things…’) from the third ‘year’. The title is a quotation from Virgil’s Aeneid – a reference again to Dido. “This is very dark piece, full of pathos,” says Angelo. “Liszt’s late works seem to contain a vision of the future, looking forward into the soundworlds of Debussy, Ravel, Scriabin and others. There’s an otherworldly feeling to this piece, and an element of deep romanticism buried beneath its dark exterior.”
Angelo credits this work with changing his life. Aged 17, he heard a recording of it by the Hungarian pianist Ervin Nyiregyházi, a one-time prodigy whose adult career (and life) traversed terrifying polarities of low and high. His musicianship reflected this extremity. “It’s an overwhelming, powerful recording and I was quite hypnotised by it,” Angelo says. “I grew up listening to many great pianists on record – Sviatoslav Richter, Vladimir Horowitz and Georg Cziffra, among others – but hearing Nyiregyházi transformed my ideas. It opened my eyes and ears to a completely different soundworld. I realised that this is the road for me. This was my catalyst for developing my own aesthetic.“My spiritual tie is primarily with the 19th century, so I felt grounded when I heard these great players that were linked to the past. They seemed to play with enormous expressiveness and a deep romanticism. It’s something very personal.”


You may well have read about Angelo on JDCMB before. Born in Australia to a family of south Italian extraction, he started out as a child prodigy, but a trapped nerve in his neck kept him away from his piano for some 20 years. A few years back it was finally cured and Angelo, who has lived in London for a long time, made a comeback recital at St James Piccadilly. He is a remarkable musician, an artist taking his cue from the "golden age" pianists he loves on recordings, and I for one can't wait to hear what he has done with this repertoire. The performance at Queen's Gate Terrace will include the public premiere of the Dido transcription.

Do come along and hear him! More details on the event's Facebook page.
Posted by Jessica at 8:13 am